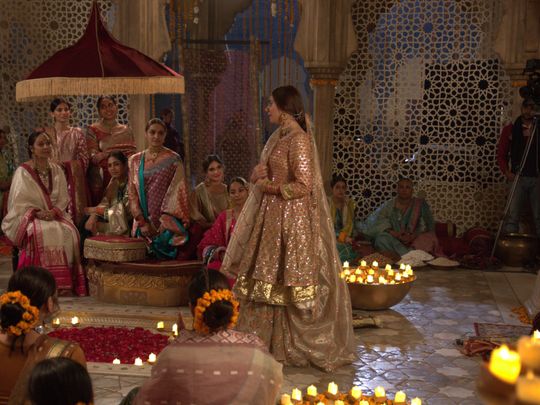 Pakistan’s much feted writer-director Shoaib Mansoor is a true feminist. Indeed, that’s the conclusion you draw when you look at his repertoire of TV shows and films. Be it ‘Bol’s in-your-face challenge to religious orthodoxy and society’s hypocritical attitude towards women, as presented in Zainab’s character (played by Humaima Malik); or ‘Verna’s scathing attack on the structures of power and control central to patriarchy.

Even ‘Alpha Bravo Charlie’ (1998) — Mansoor’s best-known work to date — which glorifies men in uniform, has at least one charismatic female character, Shehnaz, at the heart of the plot. Mansoor singularly invests her with so much substance, integrity, intelligence and compassion that it is hard not to think of her as the real hero of the show. (Those who know Mansoor from close quarters even say Shehnaz is his fictional alter-ego who embodies much of his post-adolescent angst, his sense of isolation, and his creative dynamism.)

In his latest work, ‘Dua e Reem,’ a music video featuring Mahira Khan, the ‘Shoman’ (as Mansoor is often called, in reference to the name of his production house) permits his female protagonist — a gorgeous bride-to-be (Khan) — a degree of self-worth and self-realisation so that she won’t subscribe to outmoded views on women’s subjugation in a matrimonial relationship.

The video opens on a congregation of women, all decked out apparently for pre-wedding festivities, in a mansion somewhere in pre-Partition India. Nestled amid them, the bride seems to be enjoying all the attention, her feet dipped up to her ankles in a pool covered with rose petals. Soon, an elderly lady starts to chant a prayer, while another begins to strike a drum, and the rest clap along.

As the narrator’s (Mansoor’s) voice tells us, the prayer is based on Allama Iqbal’s ‘Bachhon ki Dua’, which had become so popular back then that the singing women would tweak it to suit a particular occasion. In this case, they’ve changed the lines to read like a manual on how to become the ‘ideal wife’. The ladies sing of the virtues of being submissive to your husband, even if he slaps you in the face. They sing of obedience and allegiance even if the husband is away partying.

It gets to a point where Khan’s bride can’t take it anymore. She rises, albeit gracefully, only to belt out her own version of the dua, which is hinged on equality for both the partners. She also makes a wish for a kind of camaraderie where if one partner likes “roti” (bread) and the other likes “chawal” (rice), they are able to enjoy a happy concoction. The song reaches crescendo at this insanely innovative thought which, however, makes for a clever conceit for companionship.

Written, composed, and directed by Mansoor, ‘Dua e Reem’ (which literally translates as ‘Prayer of a beautiful antelope’) is a delightful video that packs a pertinent message. No wonder the video was released on the eve of the International Women’s Day (March 8). It has vocals by Damiah Farooqi, Shehnaz, and Mehek Ali. The supporting cast includes renowned women’s rights activist Dr Fauzia Saeed, senior TV actress Roohi Khan, and Naghma Gogi and Lucky Khan, two trans-women who have earlier featured as singers in Coke Studio 11’s ‘Baalkada’.