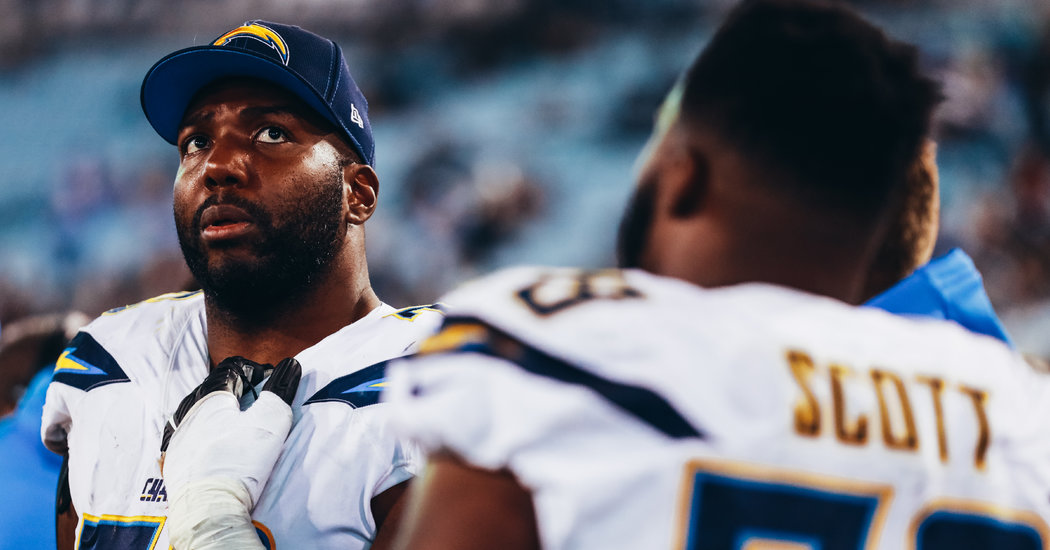 KEY BISCAYNE, Fla. — With just days to go before N.F.L. players vote on a 10-year labor agreement, one of the most influential members of its union’s executive committee has accused the staff of the N.F.L. Players Association of negotiating the proposed deal in bad faith.

Russell Okung, who has been vocal opponent of the proposed 10-year labor deal now before roughly 2,000 N.F.L. players, on Monday filed an unfair labor practice charge with the National Labor Relations Board, the independent federal agency tasked with guarding employee rights.

The three-page filing accuses the N.F.L.P.A. staff, including its executive director, DeMaurice Smith, of forcing a vote on the deal over the objections of its executive committee, in violation of the union’s constitution. Okung also accused the union’s leadership of trying to muzzle him from speaking out about the lack of transparency with the executive committee about the negotiations with N.F.L. owners, which began last year.

The owners said in February that if the players do not approve the proposed deal by the end of the league’s calendar year on March 18, then the coming season will be governed by the existing collective bargaining agreement until it expires next year.

The N.L.R.B. typically takes several weeks to investigate charges and decide if there is sufficient evidence to proceed with formal complaint, which can lead to litigation, which can take several more months.

Union spokesman George Atallah said the union’s lawyers have not seen a copy of the filing. They will comment after reviewing it.

The 11-member executive committee, which is made up of current and former players, is responsible for negotiating labor agreements. The owners approved the new, 10-year deal last month, ahead of negotiations for what is expected to be lucrative broadcast rights with media companies. Many players have opposed the deal because it adds an additional regular season game and only increases players’ portion of league revenue to 48 percent, among other points of dispute.

Last month, the executive committee voted 6-5 to not recommend the deal. After a meeting with owners at the draft scouting combine in Indianapolis, which led to a few alterations to the proposed C.B.A., the committee voted again, this time 7-4 not to recommend the deal. The measure then moved to a vote of the 32 team representatives on the board, before a general body vote. The board voted 17-14 with one abstention, below the two-thirds majority needed to recommend the deal. The union said that the simple majority was enough to send the proposal to the full membership, which has until 11:59 p.m. on Saturday to vote in a newly extended deadline.

Okung said that the proposed collective bargaining agreement should not have been sent to the full membership to vote because the deal was rejected twice by a majority of the executive committee. The dispute hinges on the view of the proposal. If the proposal constitutes an amendment to the existing labor deal, as Okung believes, it must be approved by a two-thirds majority of the union’s 32 player representatives. In his view, the proposed C.B.A. lacks enough substantive change from the current labor agreement to be considered a new deal.

If the deal is considered a new agreement, as union staff contends, then only a simple majority of the board must approve it for full membership to vote. Okung said if that is the case, the deal should not have proceeded because the executive committee twice rejected it.

Okung, who was recently traded from the Los Angeles Chargers to the Carolina Panthers, also contends in the filing that Smith and members of the N.F.L.P.A. staff violated the union’s constitution by “freezing out and attempting to prevent Mr. Okung and the other members of the Executive Committee from fulfilling their Constitutional roles as the Negotiating Committee of a new or extended Collective Bargaining Agreement.”

Okung, who joined the Executive Committee as a vice president in 2018, states in his filing that the union leadership has tried to intimidate him from speaking out about what he believes are irregularities in negotiations. He claimed to have been “threatened with criminal prosecution and union sanction by N.F.L.P.A. leadership and was subjected to an unprecedented investigation, specifically for behaviors that could not be construed under any circumstances as harmful.”

The filing comes a day before the 32 players representatives, who are meeting here at their annual convention, is expected to elect a new president, the highest ranking player in union leadership. The current president, Eric Winston, has held the position for six years but is prohibited from running for re-election because he was not on an N.F.L. roster last season. Okung has announced his candidacy. It is unclear who else is running.