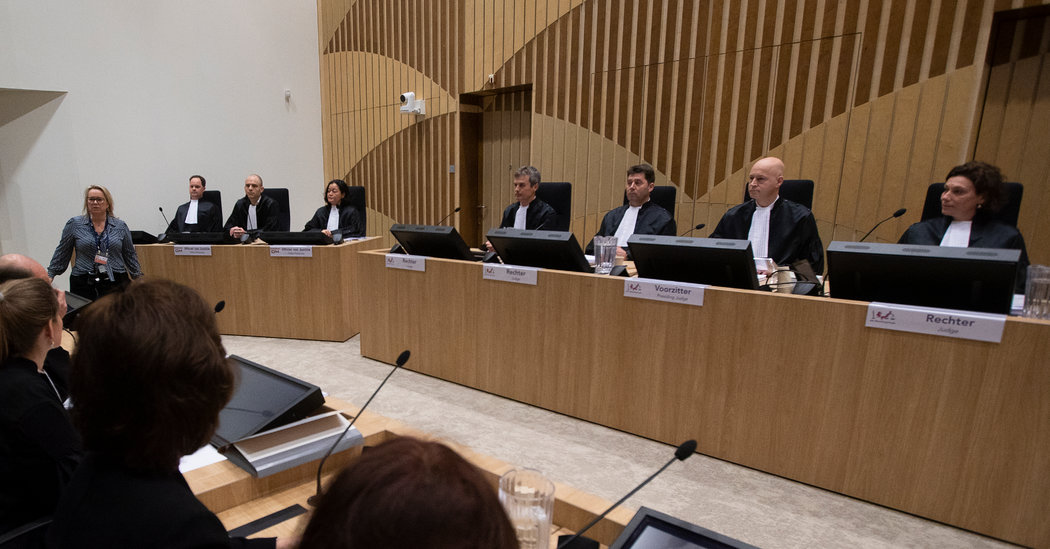 MOSCOW — A trial of four men with ties to the Russian security services began on Monday for the shooting down of a passenger jet over eastern Ukraine in 2014.

The trial by the District Court of The Hague is an attempt at justice in what for years had seemed a crime without punishment. It has been hailed as a victory for a group of international investigators who meticulously pursued the case despite Russian stonewalling.

The four suspects, believed to be in Russia or separatist areas of Ukraine, will be tried in absentia and are unlikely ever to spend time in prison. Family members of the victims placed 298 empty chairs, one for each passenger and crew member, in front of the Russian Embassy in the Netherlands over the weekend to protest the defendants’ absence.

The trial is expected to become a slow drip of evidence that will embarrass the Russian government by debunking a variety of conspiracy theories promoted by state media, and it may implicate senior Kremlin officials already linked to the disaster by existing evidence.

“In 2014, nobody ever thought there would ever be a case against the persons responsible for the downing of MH17,” Brechtje van de Moosdijk, a spokeswoman for the Netherlands Public Prosecution Office said, referring to the number of the Malaysia Airlines flight. “But now, even though there will not be any suspects, there will be a trial.”

In July 2014, an antiaircraft missile provided to separatist forces by the Russian military shot down the Malaysia Airlines flight at cruising altitude on a trip from Amsterdam to Kuala Lumpur, killing all 298 people aboard.

Russian state media floated various theories, including that a Ukrainian military jet had downed the plane or that the Central Intelligence Agency had crashed a planeload of bodies into eastern Ukraine to frame Moscow. Russia vetoed an effort to form a United Nations tribunal for the case. The trial is being held in the Netherlands, as most of the passengers were Dutch.

The Kremlin has long been reluctant to admit any involvement in the tragedy as that would mean conceding that it had a military role in the Ukraine conflict.

In the trial’s opening days, prosecutors are expected to summarize their case and read the names of all 298 victims. Any fresh evidence is unlikely to emerge until later this year.

The trial’s opening set off a new round of criticism of Russia. Tony Abbott, who was prime minister of Australia when the jet was shot down, killing 38 of his countrymen and women, condemned the Kremlin’s long campaign of denials.

“With MH17, Russia has demonstrated that there’s a touch of evil at the heart of their government,” Mr. Abbott told the The Sydney Morning Herald. “When it comes to ethics and morality, not that much has changed since the worst days of the Soviet Union.”

Christopher Robinson, the American deputy assistant secretary of state for European and Eurasian affairs, told Radio Free Europe that it was “long past time for Russia to comply, to reveal what it knows” about the tragedy. “Russia has behaved reprehensibly in this issue,” he said.

Russian officials have called the trial politicized, and said the team of international investigators should have included Russian members. When the chief prosecutor in the Netherlands, Fred Westerbeke, revealed recently that prosecutors had a witness, Maria Zakharova, a spokeswoman for the Russian Foreign Ministry, denied that could be the case. “They made a farce out of tragedy,” Ms. Zakharova said.

In June, prosecutors indicted Igor Girkin, a former colonel in Russia’s Federal Security Service, the successor agency to the K.G.B., who went by the nom de guerre Strelkov, or the Shooter. At the time of the plane’s downing, Mr. Girkin was defense minister of the larger of the two separatist enclaves, the Donetsk People’s Republic.

The other defendants are Sergei Dubinsky and Oleg Pulatov, both former Russian military intelligence officers, and Leonid Kharchenko, a Ukrainian citizen who led a Russian-backed military unit.

Russia’s involvement in the events was evident immediately. The Associated Press had reported before the plane was shot down that separatist forces were moving a new antiaircraft system into the conflict zone from the direction of the Russian border. Debris from near the plane’s cockpit was peppered with the telltale pockmarks of antiaircraft shrapnel.

An international team of prosecutors from Australia, Belgium, Malaysia, the Netherlands and Ukraine painstakingly investigated the case for years, gathering missile fragments, cellphone intercepts and witness accounts, helping to dispel the miasma of lies and conspiracies hanging over the attack. They both proved a Russian role and refuted the flurry of other theories.

Investigators concluded last year that there was “almost daily telephone contact” between separatist leaders and Russian officials, including with Vladislav Surkov, a senior aide to President Vladimir V. Putin. All four defendants are accused of 298 counts of murder, each punishable by up to life in prison.