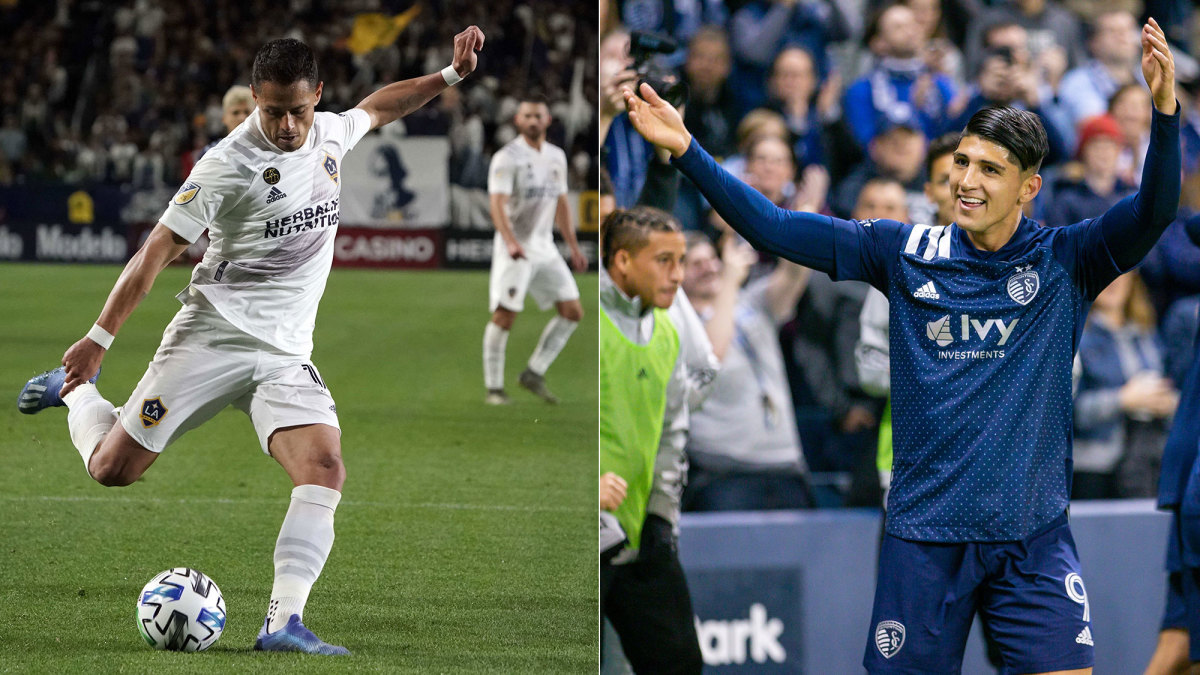 MLS’s second week is in the books, and it’s been more of the same for two major Mexican forward signings–for better and for worse.

Beyond that, only four perfect teams remain, with Atlanta United, Sporting Kansas City, Minnesota United and the Colorado Rapids making it two wins in two games. On the other side of the spectrum, expansion clubs Miami and Nashville are both still looking for their first points of the season–as is NYCFC.

To cap it all off, a highlight fest of a draw broke out between LAFC and the Philadelphia Union, with their six-goal thriller dazzling in the wee hours of Sunday night/Monday morning.

Here’s a look back at the weekend across MLS:

Chicharito’s stats so far in Los Angeles: Two shots (none on goal) and the fewest touches on the Galaxy through two games; two late night TV appearances; one meeting with LeBron; one puck dropped at a Kings game; one refusal to talk to the media.

It’s been a rocky start to life with the Galaxy for Javier Hernandez, who is under the spotlight like few signings before him due to his global stature, his significance specifically in the L.A. community and the man he replaced, goal-machine Zlatan Ibrahimovic.

In simplified terms, he’s not getting put in position to score, and he’s not the kind of player who is going to conjure up magic out of nowhere, especially at this point in his career. Whether that requires a complete tactical overhaul or if it’s just a matter of working out timing and run patterns with his new teammates remains to be seen, but the longer he doesn’t become a goal threat, let alone start piling up the goals on a consistent basis, the hotter that spotlight will become.

It took three tries for Chicharito to sink James Corden in a dunk tank. Perhaps the third match will be the charm for him, too, with the Galaxy heading to play at Inter Miami and their new star attraction desperately looking to get on the scoresheet. There’s time yet to determine where he’ll fall on the scale of Nery Castillo to Carlos Vela.

One high-profile Mexican forward new to MLS who is delivering is Alan Pulido. The former Chivas man continues to look the part for Sporting Kansas City, with a goal and an assist in his home debut following a goal in his team debut a week before. SKC has been craving forward production like this, and it’s worth noting the opponents thus far (Vancouver, Houston) are the same ones that have blanked Chicharito.

A more difficult test in Atlanta beckons next.

While you were sleeping, the leading contender for MLS Game of the Year broke out in Los Angeles.

A long-range blast from Sergio Santos was upstaged by a sumptuous free kick by Vela … which was then surpassed by an even more outrageous free kick by Jakob Glesnes, only to have that be answered by a peach of a curler from Diego Rossi. Less-spectacular finishes from Brenden Aaronson and Eddie Segura followed, and the only reason it wound up at 3-3, was because of Andre Blake’s point-blank save on Brian Rodriguez in stoppage time–one of eight saves the Jamaican international had on the night.

Sit back, relax and treat yourself to the highlights:

Saturdays are for late equalizers. At least that’s the case for Real Salt Lake and FC Dallas, whose stoppage-time strikes salvaged draws, and for the Seattle Sounders and Chicago Fire, who scored slightly earlier to rescue a single point apiece.

FC Dallas came from 2-0 down to take a point off Thierry Henry’s Montreal Impact, with an 83rd-minute strike from Zdenek Ondrasek followed by a goal six minutes into stoppage time from 17-year-old U.S. youth international Ricardo Pepi.

And the Chicago Fire got a 70th-minute goal from former U.S. left back Jonathan Bornstein to force a deadlock in New England.

You’d be forgiven if you forgot that Drew Moor, linchpin of the Colorado Rapids’ 2010 MLS Cup-winning team, was back with the club. Yet there was the 36-year-old defender, popping up with a game-winning goal to give Colorado a second straight victory in stoppage time to start the season.

The Rapids have only led for all of 18+ minutes this season, but they have six points to show for it.

Don’t tell that to Ifunanyachi Achara and Toronto FC, with the rookie out of Georgetown scoring a valuable winner vs. NYCFC and putting in an overall impressive debut shift in the 1-0 victory.

Achara was the 25th overall selection in January’s draft, and while his performance clearly does not mean that A) he’s a league MVP in waiting and B) all SuperDraft picks are thus capable of such showings, it does indicate that for those who dedicate the time to properly scout, there is some “super” value still to be had.

Atlanta United’s first match without the injured Martinez, who is out for the long haul after tearing his ACL, featured the two most likely in-house solutions stepping up. No teams have second- and third-best scoring options whose transfer fees combine for nearly $30 million. And while Pity Martinez and Ezequiel Barco aren’t the goal-binge-types quite like Josef Martinez, they should be able to do a sufficient job with creating in the attack with the Venezuelan marksman sidelined.

Josef Martinez was in attendance, applauding from a Mercedes Benz Stadium suite and getting a chance to witness Barco’s celebration tribute first-hand.

Emerson Hyndman scoring a great goal for a second straight game also bodes well for the Five Stripes, who turned to Adam Jahn at center forward but will clearly dip into the market for reinforcements. In the meantime, things are O.K., but that could change quickly with a Concacaf Champions League quarterfinal first leg at Club America this week.

Rodolfo Pizarro fittingly has Inter Miami’s first official goal in MLS play, but the club remains without a point through two games after imploding in a second-half sequence of events.

First, the good: A well-worked goal and first-class finish to cap a move that began with the lineups still scrolling on the broadcast.

Now, what can’t happen: A red card to Roman Torres, a penalty committed by Victor Ulloa and a gift given to a team playing at home. It all went belly up in a matter of minutes for Miami, which let a real chance at points slip away on Yamil Asad’s penalty and Frederic Brillant’s nice winner that almost immediately followed.

Ike Opara spent the first three years of his career in San Jose with the Earthquakes, and he bookended his return there with a pair of goals for his surging new team.

No team has more goals than Minnesota United’s eight through the opening two games, with the veteran center back Opara doing his part in a wild 5-2 win. The game was Opara’s second multi-goal performance of his career, with the other coming in the last game which he scored, last June vs. FC Cincinnati.

Remember when Diego Valeri coming back to Portland this season seemed unlikely at best? The Timbers (and their fans) must be quite pleased at the change in that storyline, with the Argentine maestro scoring for a second straight game–and doing so in style–on Sunday. He makes this stop-and-volley look easy in a 1-0 win over Nashville.

The flip side, of course, is that the Timbers were completely toothless in the second half, Valeri has Portland’s only two goals so far this season after the club spent big to sign Jaroslaw Niezgoda and Felipe Mora (the former has yet to play, for what it’s worth) and that isn’t a sustainable recipe for success.

It can’t be that big of a surprise that FC Cincinnati, Inter Miami and Nashville SC opened the season at 0-2-0. FCC has been an on-field trainwreck in its time in MLS (though the roster is improved in Year 2), while Miami and Nashville are expansion teams getting their feet under them and are having the scoring troubles that were anticipated at the start of their inaugural seasons.

NYCFC, however, is a different story. It topped the Eastern Conference a season ago and entered 2020 with high expectations. NYCFC returned basically every player that mattered from a season ago and got off to a bright start in CCL under new manager Ronny Deila. A red card three minutes into the opener certainly didn’t help matters vs. Columbus, but the club was fortunate to lose only 1-0 to TFC in a playoff rematch from a season ago, with Sean Johnson’s eight saves (and some officiating decisions) helping keep it tighter.

With a CCL quarterfinal series vs. mighty Tigres UANL sandwiching a league match vs. FC Dallas, it could get worse before it gets better for one of MLS’s early disappointments.