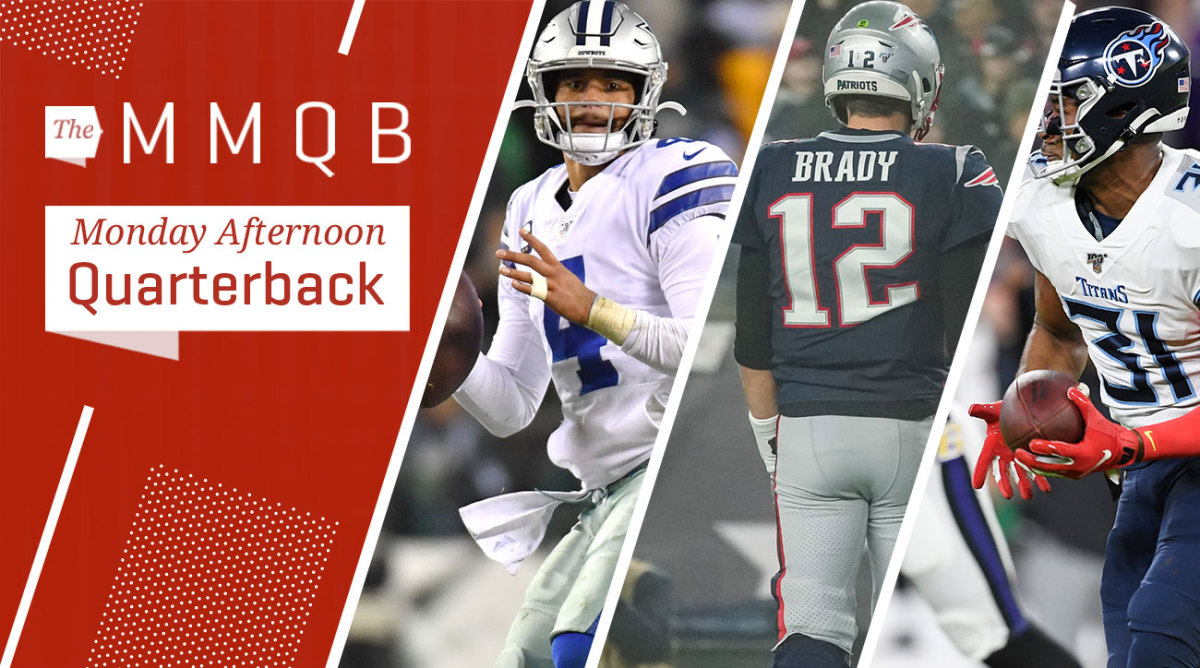 This really feels like a long wait for the new league year to start. But we’re all talking about Tom Brady and every other free agent under the sun, so I guess the NFL wins again. As expected…

• Because Dak Prescott’s been raked over the coals a little, we’ll give you the math on his leverage points. The exclusive franchise tag number sits right now at $31.63 million. That means tagging him again in 2021 would cost the Cowboys $37.95 million. That means, by doing nothing, he can average $34.7 million over the next two years, then potentially hit the market in 2022, at age 28 (which is the Kirk Cousins template). In most deals, very little is guaranteed past Year 2. So if you’re Prescott, would you play the next two years (with the risk of injury in Year 1) on tags, or sign a long-term deal averaging that number ($34.7 million) knowing there’d be a series of two or three or four de facto team options after that? You’d probably need some sweeteners to sign long-term, if you were going to give the team that kind of control, right? And that’s what makes it tough to do a deal with a quarterback on an expiring contract. The Cowboys have to prove, in essence, they’re giving Prescott a better option than pursuing the Kirk Cousins route. Kirk Cousins, by the way, has made $98 million the last four years, since his rookie deal expired in March 2016. That’s about the same, on average, as what Andrew Luck got in an extension that year, and Cousins got to switch teams in the middle, and has $30 million coming next year, with a no-tag provision thereafter.

• In the MMQB, we laid out how the Niners see asset management, and you can’t look at their quarterback situation in a one player-vs.-the-other way. I’d add that the Patriots look at things that way too. I don’t think it’s far-fetched to think that Bill Belichick could look at the idea of Jarrett Stidham (2020 cap number: $744K), a reclamation project (Marcus Mariota) and a draft pick, and find merit. The savings would give the coach breathing room to augment the roster elsewhere—an edge that teams with quarterbacks on rookie deals have been taking advantage of throughout this decade. It’s at least something to think about.

• I asked Titans safety Kevin Byard on Sunday for his feelings on the possibility of Tom Brady landing in Nashville. And while respectful of Brady, he did intimate where he stands. “I’m on social media, so I see all that,” Byard said. “Honestly, this time of year, every rumor, every piece of speculation that’s out there, really, who knows what’s gonna happen? I know we have free agents. I understand Coach [Mike] Vrabel, [GM] Jon Robinson have decisions to make. But I want all those guys back. I want all the guys to come back, even though I know that’s probably not happening. And I try to worry about my own stuff, and be ready, so we can repeat what we did last year, and take it a little further, and be in position to win a Super Bowl. We’re only gonna get better.” Translation: He’d love Ryan Tannehill back, but it’s not up to him.

• It’s fair to say that the NFLPA staff wants as many players to vote as possible. The strength of the CBA proposal they’ve put forth is in how it helps the rank-and-file, and that 60% of the league’s players are on the minimum (and will net a $100,000 in 2020 as part of this deal) is important here as the union tries to get every last one of them to cast a ballot. So we have a two-day delay, with the deadline to vote now on Saturday night at 11:59 p.m. ET. Which …

• … could affect the vote for president. Of the four candidates nominated on Monday, Panthers OT Russell Okung and Giants S Michael Thomas went “no” during the executive committee vote in late February, Bucs LB Sam Acho voted yes, and Browns C J.T. Tretter isn’t on the EC but offered a full-throated analysis of the CBA proposal for his fellow players on social media. Here’s the thing: When they vote tomorrow, they won’t know whether or not the CBA will pass. That means they’d have to vote knowing a 2021 lockout was on the table, which makes it more likely that you’d go with a hard-liner. Which would seem to favor Okung and Thomas. And it could affect a lot, CBA or no CBA, when it comes to the future of the union.

• I’d say my biggest problem with the CBA, if I was a player, would the lack of an opt-out somewhere in there. The landscape is going to change pretty significantly (gambling, how we consume games, etc.) and probably unpredictably and, if it was me, I’d want protection against that. I also understand why the owners don’t want an opt-out in there—having a long, guaranteed deal will allow the league to do longer, more lucrative broadcast deals, and do other business more efficiently.

• We’ll see if the league moves the tag deadline. As stands now, it’s on Thursday at 4 p.m., and will happen under the current rules, which allow for teams to use two tags, one franchise and one transition. The chance to do that could impact the strategy of teams like the Cowboys (Prescott, Amari Cooper) and Titans (Tannehill, Derrick Henry). So either the league moves it back three days, past the CBA vote. Or they’ll have to tell teams what the plan would be if the CBA’s approved (likely that teams that tag two players will have to rescind one upon the new CBA’s ratification).

• It’s easy to feel good about Josh Norman going to Buffalo—Bills coach Sean McDermott, a defensive backs coach by trade and then the Panthers defensive coordinator, was instrumental in Norman growing from an inconsistent, immature young corner into an All-Pro in 2015. So I’m sure Norman feels like whatever he has left, at 32, McDermott will be able to get out of him. And Buffalo could wind up with a pretty nice bookend for Tre’Davious White at a relatively cheap rate.

• One thing I heard this weekend: Things took a wrong turn between Trent Williams and Washington initially because Williams was asking for quarterback money. It’s a bold move, of course. And it’s probably a bunch of different people’s fault that things spiraled from there.

• Pay attention to the tally of states with legalized sports gambling. Illinois became No. 15 on Monday. Word has been the NFL won’t go full bore with their strategy to monetize gambling—for the sake of equality among its ranks—until all (or almost all) teams play in states with legalized sports betting. I’ve talked to owners who believe that within three or four years, the numbers will be somewhere around 35 or 40, which might be enough.