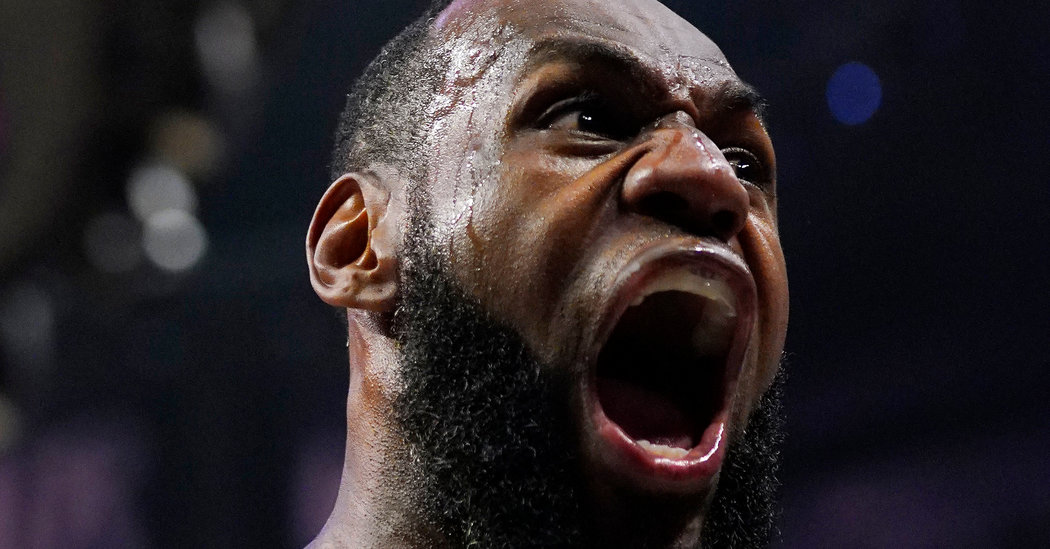 LOS ANGELES — LeBron James has been very good at basketball for a very long time. Beyond all the points he has scored and the rebounds he has grabbed and the championships he has won, it is worth remembering just how much time he has spent plying his trade.

Now in his 17th season, James has supplied more than 48,000 regular-season minutes, which ranks among the top 10 on the N.B.A.’s career list. At 35, he is the 10th-oldest active player in the league. Even so, he has shown no signs that he is approaching the end of his career. His production defies logic.

“Just remarkable,” Doc Rivers, the coach of the Clippers, said before his team faced James’s Lakers on Sunday afternoon at Staples Center. “I’ve never seen a guy get better at 35 in sports. It’s just unusual. I mean, he’s doing something right — he really is. Because he looks stronger and faster.”

James proceeded to overpower the Clippers in a 112-103 win, finishing with 28 points, 9 assists and 7 rebounds as the Lakers kept rolling. It was their second win in three days against opponents who are, like the Lakers, championship contenders. On Friday, the Lakers eased to a 113-103 victory over the Milwaukee Bucks. All James did in that game was collect 37 points, 8 assists and 8 rebounds while putting the defensive clamps on Giannis Antetokounmpo for key stretches of the second half.

Combined, the two wins broadcast a couple of clear messages to the league, if those messages were not already apparent: The Lakers are for real, and James has seldom been better.

“He was unbelievable,” Lakers Coach Frank Vogel said. “In my mind, this season, this was his best two-game stretch. Really just dominated — dominated — both games.”

Not so long ago, James looked fallible, human, old. He injured his groin last season, which led to his missing a big chunk of games, and he wound up watching the playoffs from home for the first time since 2005. Perhaps it should not have been a total surprise: James was acting his age. No athlete excels forever, not even LeBron.

Given those struggles, his renaissance this season has been something to behold: He has looked virtually indestructible while averaging 25.7 points, 7.8 rebounds and a career-high 10.6 assists a game. The Lakers (49-13) have the best record in the Western Conference before their game against the Nets on Tuesday night.

If he has lost a step (which is debatable) and now lacks the superhuman physical gifts he once possessed (ditto), James has tried to compensate by working as hard as ever, he said. The groin injury shook him. He seemed to recognize his own mortality as an athlete. Last summer, while filming “Space Jam 2,” he stuck to a rigid workout schedule. He made sure everyone knew it, too.

“If you follow me on social media, I was in the weight room at 3, 4 o’clock in the morning,” he said, “making sure that I was preparing myself for this season no matter what was going on.”

At the same time, it has not been the most tranquil season for James, or for the Lakers, or for the rest of the N.B.A. Early on, James found himself embroiled in controversy over China and free speech. The league has also had to cope with the deaths of Kobe Bryant and David Stern. Now, there are widespread concerns over coronavirus, which has league officials considering whether to play games without fans to help reduce health risks. For his part, James told reporters last week that he would refuse to do his job in empty arenas.

“We play games without the fans? Nah, that’s impossible,” James said. “I ain’t playing if you don’t have the fans in the crowd. That’s who I play for.”

In any case, he was able to play for them over the weekend — and, in the process, leave his imprint on the Bucks, the Clippers and voters for the N.B.A.’s Most Valuable Player Award. In eight games since the All-Star break, James has averaged 30.1 points while shooting 55.1 percent from the field. The Lakers have won 11 of their last 12 games over all.

“Probably one of the smartest players to ever play basketball,” Rivers said. “I think we get lost in LeBron’s physicality too much, and we should think about his brain more. His brain is what makes him great. There are a lot of people in the league with LeBron’s body. There’s no one in the league with his brain.”

The Lakers have leaned on James this season as their point guard, a role he had been reluctant to embrace for much of his career. But he is leading the league in assists, and he spent Sunday methodically puncturing holes in the Clippers’ shrink-wrap defense.

He collected rebounds and pushed the ball upcourt. He found Avery Bradley for open 3-pointers. He threw lobs to Anthony Davis, who had a monster game of his own. But when James unearthed seams to the basket, he was more than willing to do the hard work himself. In the game’s final minute, James went right at the Clippers’ Marcus Morris Sr., bursting past him for a layup while drawing a foul that sealed the win.

“He was just too much for them,” Vogel said.

James soon checked out of the game as the arena filled with “M-V-P” chants. Keep in mind: It was technically a home game for the Clippers, but Staples Center was packed with Lakers fans. The Lakers still run Los Angeles, and James seemed determined to remind everyone, over the course of an eventful weekend, that he still runs the league, too.

Once James reached the bench, his teammate Kyle Kuzma pretended to put a crown atop his head.

“It’s my responsibility to put this team in a position to be successful,” James said. “They look at me as a leader. And it’s my job, not only on the floor to get guys opportunities, get them great looks, but to inspire them, as well. To show them that I’m not slowing down, even at this stage of my career.”