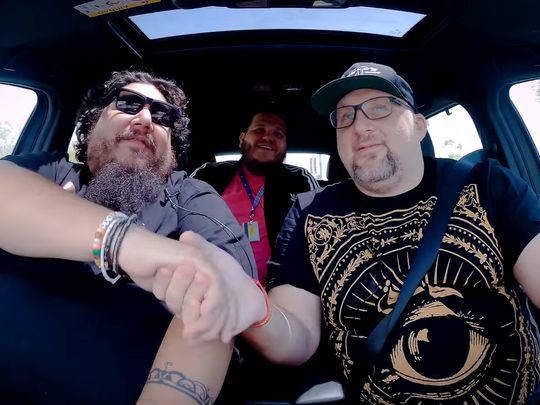 Did you know the UAE has its very own ‘Carpool Karaoke’?

Big Hass — a UAE-based radio presenter from Saudi Arabia and a long-time champion of the regional music scene — has kept the engine roaring on his YouTube series ‘Buckle Up with Big Hass’ for two years now, and he has no plans to hit the brakes.

Similar to James Corden’s popular late-night segment — where he interviews famous musical guests on a fake ‘ride to work’ in Los Angeles — Hass picks up emerging and established artists around Dubai, getting to the bottom of what makes them tick.

“For the first time in a long time, it felt 100 per cent me. No sponsors, no edits, no cuts, just one-on-one with my guests, trying to get to know them and push them further in our culture,” Hass tells Gulf News tabloid.

“To be honest, the reason why I launched ‘Buckle Up’ was because I’m a fan of conversations and podcasts. I found it real easy for me to pick up my guests, have a conversation in the car with no lighting, permits or sound issues,” he adds.

The series recently sped past its 44th episode on YouTube, which features Lebanese singer-songwriter Michele.

If you’re hoping to be next in the hot seat, you should know: there’s no art to who gets to ride shotgun next to Hass.

To him, it’s a more intuitive process.

“I find myself picking guests that I want to get to know more and Alhamdulillah [thanks to God], it’s been a great journey and a great diverse line-up of guests,” he reveals.

“The crazy part is that the ‘podcast’ section [with audio episodes] has also been doing well, which means people are watching but also listening, and that brings so much joy and pride into my heart.”

Corden’s recurring segment ‘Carpool Karaoke’ began in 2015 with Mariah Carey and has been going strong since, with recent guests including Billie Eilish and K-Pop band BTS. (It even spurred on a whole spin-off series on Apple Music.)

But Hass’ clips can exceed an hour long — compared to Corden’s 10-20 minute segments — affording him the freedom to dig deep and explore, without relying on ‘celeb power’ to fuel the ride.

“‘Carpool Karaoke’ is set under the TV umbrella, so the template of the show must be followed to the tee,” says Hass. “The concept of the show is to interview celebrities and to sing along in a car ride. ‘Buckle Up’, however, is a long-form YouTube show interviewing local and regional talents regardless of their ‘celebrity status’.

“It’s flexible, sometimes improvised, convivial and instead of singing along, I invite my guests to either play their instruments, adding a quick a cappella. Some rappers even freestyle!”

The greatest aspect of the whole thing?

“Bloopers,” says Hass. “Bloopers and the unplanned moments are the best part of my show.”

But despite the relaxed, well-shot and easy-to-binge nature of the show, there’s a deeper purpose to Buckle Up than simply entertainment.

“My motto is to shed light on talents as they go on their journey, before the popularity and the fame,” explains Hass.

“It’s important to highlight the ascending music scene in the region and it’s also vital to our culture to support our own before anything else.

“This creates an ecosystem of community, communication and potential collaborations. We need to keep making our circles bigger and making them intersect more often.”