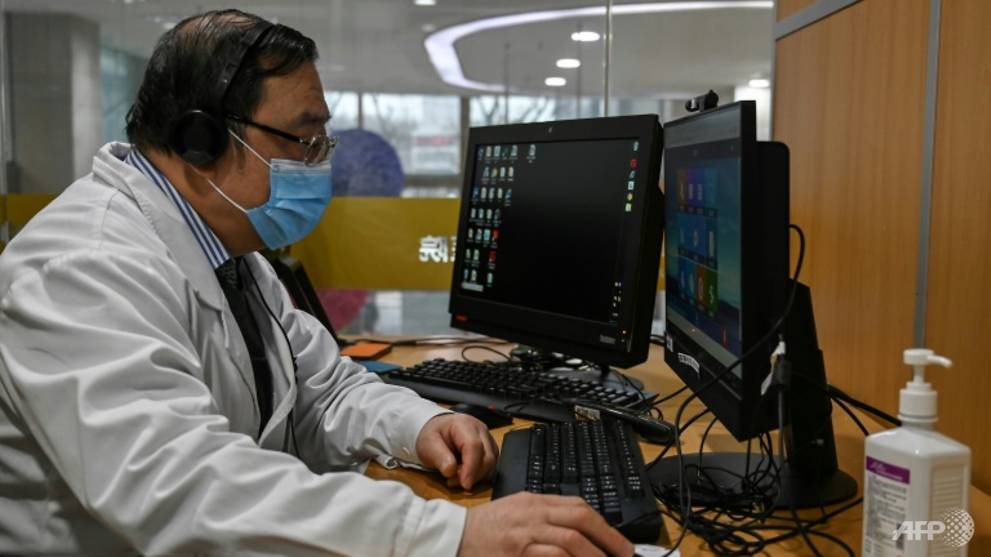 SHANGHAI: As the coronavirus crisis rages, a Chinese woman working in Paris takes to a computer to consult a doctor thousands of kilometres away in Shanghai about a worrisome cough and headache.

The physician says she probably has the common cold and prescribes rest, in a cyber-consultation that embodies the huge push the coronavirus epidemic has given tele-medicine.

As millions of Chinese heed official calls to reduce person-to-person encounters, are fearful of entering hospitals, or simply can’t reach clinics due to virus-related transport restrictions, tele-medicine is booming.

Online platforms for consulting doctors – offered by tech leaders Tencent, Alibaba and a range of other providers – have reported a surge in demand since the virus emerged in January.

The popular health app of Ping An Insurance Group, one of the world’s biggest insurers, has been visited 11 billion times since the outbreak erupted, the company said.

New users of the platform have multiplied ten-fold and it now counts at least 315 million customers who make 729,000 inquiries per day at clinics nationwide.

Wedoctor, an app backed by Tencent, launched a special coronavirus platform on Jan 23. It said that by the end of February thousands of doctors had provided nearly 1.5 million consultations through the programme.

Ali Health meanwhile, a healthcare app provided by Alibaba, said even as early as Jan 31 that the platform had more than 1,000 doctors participating and over 3,000 patients per hour seeking consultations.

The facility began experimenting with tele-medicine in 2015 and last month received a government licence to operate what it calls a “cloud hospital”.

Internet consultations have grown from virtually nil on Feb 25 to 5,293 as of Sunday.

“This will be a long-term change in medicine,” said Zhou Jian, a top official with the hospital.

“This changes the model.”

Users download an app, then join a queue of patients. After a brief consultation, doctors give medical advice which may include merely rest, consulting a specialist – which also can be done online – or prescription medication.

To curb the coronavirus’s spread, China’s government has been promoting stay-at-home options like tele-commuting and online education, and late last month began allowing the use of national medical insurance to cover prescriptions issued via the web.

At the Shanghai hospital, medications are paid for online using one of China’s ubiquitous e-payment platforms, then delivered to patients free of charge, sometimes the same day, officials said.

“It doesn’t matter where you are, as long as you have a mobile phone and a signal, you can have a face-to-face medical consultation with our doctors,” said Zhou.

Most e-consultations at the hospital have nothing to do with coronavirus symptoms.

Dozens of doctors across a range of disciplines, from paediatrics to cardiology to dermatology, are available, taking turns at a cluster of cubicles equipped with computers and the necessary software.

Hospital officials said the benefits are many, including easing the burden on hospital staff, streamlining processes and allowing the elderly or infirm to avoid an unnecessary trek outside.

But many elderly Chinese unaccustomed to using apps often have trouble, said cardiologist Wang Dewen, 75, after completing a series of online chats with patients.

“Older people are not as proficient with operating a mobile phone. That’s probably the biggest difficulty,” he said.

However, if tele-medicine is to grab a foothold anywhere, China is a good bet.

From messaging to buying groceries and meals, paying bills, making investments and seeking out romantic partners, the country has embraced the use of mobile technologies like no other nation.

Pulling out cash can bring a snigger in a place where many purchases are done via one-click mobile apps linked to a bank account.

And traditional money has lost even more currency of late as people seek to avoid contact with anything that could carry COVID-19.

Virus-phobia has sent hundreds of millions of Chinese in search of ways to work online, with schools, businesses, government departments, medical facilities – even museums and zoos – wrapping themselves in a digital bubble for protection.