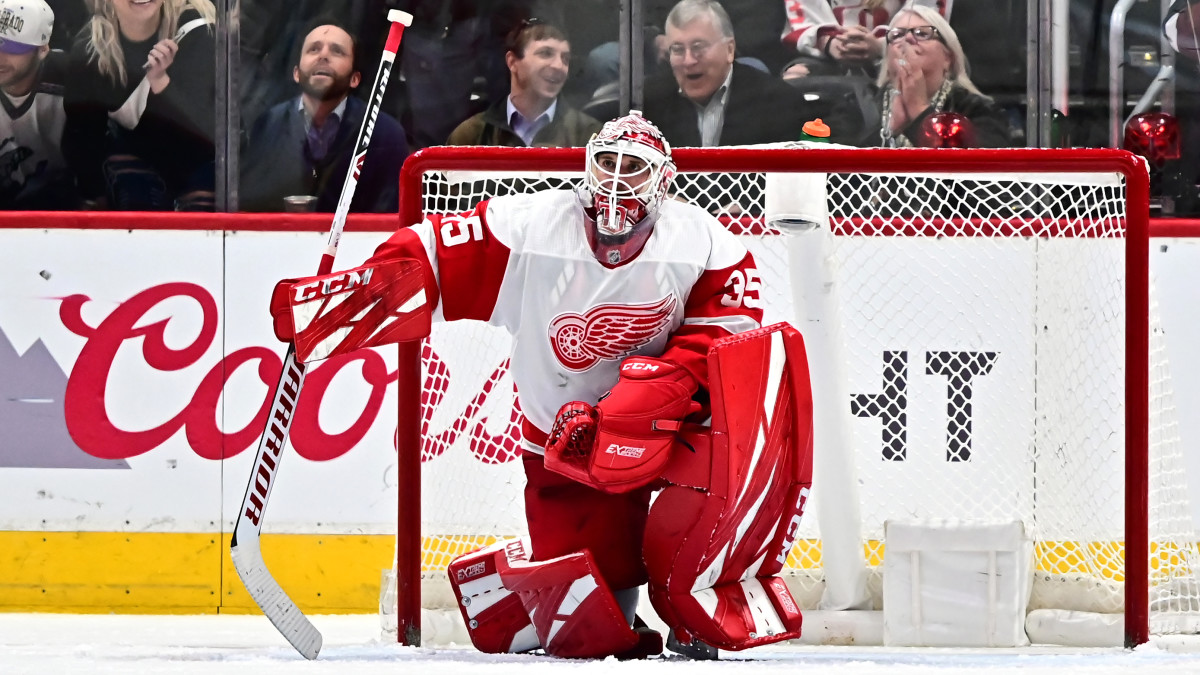 David Ayres played half an NHL game. He recorded a victory. Jimmy Howard has played 27 games this season. He has two victories, but none since October.

It’s been a sad fall from grace for Howard, a three-time 35-plus game winner in the NHL. This season was supposed to go much differently: if healthy, Howard would have been able to hit the 50-game mark again, with Jonathan Bernier serving as a reliable backup for a team where 31st place was almost a guarantee from the get-go. But Bernier has played surprisingly well and has earned the starting spot, while Howard has failed to recover from an early-season injury to post one of the worst seasons by an NHL goaltender that we’ve ever seen.

Of course, the Red Wings are having a historically terrible season, but the difference in Bernier’s play (13-21-3 record with a .920 SP and 1.35 GSAA at 5-on-5) is astounding. While Howard has been bad, he hasn’t played enough games to quantify it as being one of the worst by an NHL goaltender, but it’s sure not pleasing.

**
More From The Hockey News:
*Henri Richard: Another Hall of Famer and Childhood Hero Is Gone
*What Will the Jets’ Defense Corp Look Like in 2020–21
*NWHL Playoff Preview: Pride Are Favorites, but Don’t Crown Them Yet
**

For this ranking, the goalie had to have won fewer than 10 games and lost at least 35 while playing a minimum of 41 games – that’s half a season by today’s schedule, even though that wasn’t the norm for most of the NHL’s lifespan. With that in mind, let’s look at back at some of the worst records in NHL history by goaltenders:

Peter Sidorkiewicz, Ottawa, 1992-93 (8-46-3)
The Vegas Golden Knights had the most successful launch in NHL history, making it all the way to the Stanley Cup final in their first season, partly due to the stellar play of goaltender Marc-Andre Fleury. Strong goaltending has been a rarity in the expansion world, though. Sidorkiewicz famously had one of the worst seasons any goaltender could have asked for, winning just eight of his 64 games, highlighted by a disastrous -50.1 GSAA. Sidorkiewicz was the Senators’ representative at the all-star game that year (and even won the game), but he left the organization at the end of the season and went on to play just four games with New Jersey from 1993 to 1998.

Ken McAuley, NY Rangers, 1943-44 (6-39-5)
McAuley played just two seasons in the NHL, starting off with a league-leading 39 losses and 310 goals against in 50 games played. His 6.24 GAA is the worst by any goaltender with 25 games played in a season and he’s the only goaltender to allow over 300 goals in a season. McAuley had another crack at it the following season and improved to 11-25-10, but that was it for his NHL career as he was replaced by Chuck Rayner the following year.

Ron Low, Washington, 1974-75 (8-36-2)
Like Sidorkiewicz, the odds were stacked against Low from the beginning. He assumed Washington’s starting duties in its inaugural season after splitting the net in Toronto with Jacques Plante the year prior, and it was clear Low wasn’t ready for the disaster that was about to unfold. Low’s -57.1 GSAA is the worst in NHL history and he had even fewer wins the following seasons with six (in five fewer games) but the rest of his stats were on par with his brutal 1974-75 season. Fortunately, Low played another eight seasons in the NHL after his awful first one in Washington but he never resumed starting duties after leaving the American capital.

Jim Rutherford, Detroit, 1976-77 (7-34-6)
If you think Wings fans are starving for playoff action now, imagine how they felt following the 1967 expansion. Detroit made the post-season just once from 1967 to 1977 (a 4-0 sweep in the first round at the hands of Chicago in 1970), and the final year of the streak was the worst one of all. Rutherford was the starting man in Detroit but Ed Giacomin, who played 15 fewer games, came out with one more victory (and three shutouts) than Rutherford accomplished. Rutherford had a winning record the following season, his last as an NHL starter, before bouncing around the NHL and AHL at the end of his career. With three Stanley Cups as an NHL GM, he likely isn’t too concerned about that one rough season.

Gerry Desjardins, NY Islanders, 1972-73 (5-35-3)
As expected, the Islanders had a brutal first season in the NHL, finishing with just 12 wins and 30 points in 78 games. Desjardins split the net with Billy Smith that season, but even though Smith had a 7-24-3 record himself, it was Desjardins’ five-win season that really stood out. His -43.5 GSAA is the fifth-worst in league history and despite playing in just 44 games, Desjardins sat behind Gilles Meloche (235 GA in 59 GP) in goals allowed. Desjardins had a couple of strong seasons in Buffalo near the end of his career, and the Islanders went on to build one of the best dynasties in hockey a few years later, so it worked out in the end.