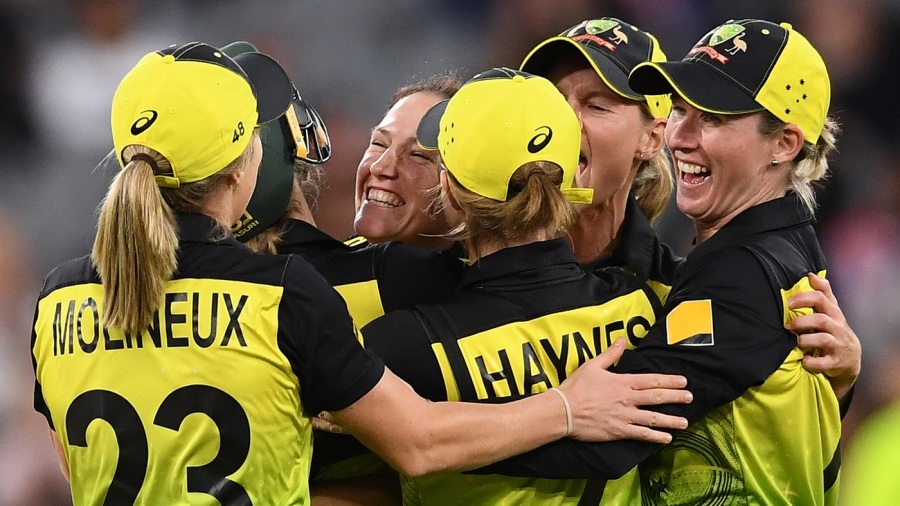 “We haven’t played our best game of cricket yet and that’s still out there somewhere and hopefully it happens tomorrow,” Meg Lanning said on Saturday. Her team delivered in magnificent fashion, riding on the coattails of an audacious innings from Alyssa Healy, to claim a fifth T20 World Cup title with a crushing 85-run win in front of an MCG crowd of 86,174, just marginally short of a new world record for a women’s sports event. .

There were so many bigger-picture narratives about the day, but there was only one thing in the minds of the two teams for the few hours on the field. It was Australia’s day from the moment Lanning won the toss. They set the tone with the first over of both innings. Healy was dropped in an over that went for 14, making a similar statement that her husband, Mitchell Starc, who was among the thousands watching, did against New Zealand in 2015 men’s World Cup final. In the field, Megan Schutt got the better of Shafali Verma who had previously won their head-to-head hands down.

It had not just been about Healy with the bat. Beth Mooney, who was also dropped on 8, finished as the leading run-scorer of the tournament with 259 at 64.75 after an expertly-paced 78 of 54 balls to ensure the opening stand was built on even if India clawed things back somewhat in the final five overs.

That was the only period where the contest was even close. After Verma’s early departure things quickly got worse for India when Taniya Bhatia was forced to retire hurt after a blow on the neck (and was later subbed out with concussion) and before the end of the fourth over both Jemimah Rodrigues and Smriti Mandana had picked out mid-on against left-arm spin. All that was left was for Australia to finish the job.

Against the first ball of the final Healy came down the pitch against Deepti Sharma and swung a boundary through midwicket. The same could easily have happened the next two deliveries as well as Sharma took until her fourth delivery to pitch the ball. Then came a moment India will rue for a long time when Healy drilled a chance to cover where Verma shelled it. Another boundary, driven beautifully through the covers, signed off the first over which cost 14 runs. Even that early in the match it felt like a huge swing towards Australia. After two overs Healy had five boundaries and though she only added one more in the next four, by the end of the powerplay Australia had a firm grip at 49 for 0.

Immediately after the fielding restrictions were relaxed, India turned to their trump card on Poonam Yadav. Her first delivery was a perfectly decent googly that was nudged into the off side by Mooney. It might sound like a very small moment, but that was the delivery that caused so many problems in the opening match at the Sydney Showground. Australia’s strong start meant they could also sit on her somewhat, especially when the carnage continued at the other end. Healy was taking things to a new level. Two consecutive sixes straight down the ground off Rajeshwari Gayakwad – the first 83 metres – powered her towards a 30-ball fifty, the fastest by a male or female in any ICC global limited-overs final. Even better was to follow, though, when she launched three consecutive sixes off Shikha Pandey, the third of them a drive over cover that was eye-poppingly brilliant.

Mooney’s innings summed up so much about her career: overshadowed, for a large period, by a team-mate but when you look she has top-scored with a defining innings. She was the perfect foil for Healy’s early onslaught, feeding the strike to her partner as often as she could although not without some eye-catching shots of her own. When Healy fell, picking out long-on trying for a sixth six, Mooney went to a 41-ball half-century and followed it with a pristine inside-out cover drive off Radha Yadav. To India’s credit, they did not completely fall apart. Sharma struck twice in her last over to exact a modicum of revenge by claiming Lanning and Ash Gardner. Having started the last five overs with nine wickets in hand they only brought 42 runs.

Schutt’s first over the tournament, against India, went for 16 as Verma took hold of her. “Clearly, I don’t think I’m the best match-up to those two in the powerplay, they find me easy to play,” she said after the semi-final. It was a very different story this time. Verma laid down the gauntlet with a wonderful lofted drive first ball, only for it to plug in the outfield, but two balls later edged a back-of-a-length delivery with Healy following her runs with a superb catch up to the stumps. The first three bowlers used by Australia – Schutt, Jess Jonassen and Sophie Molineux – all struck in their opening overs. It was complete dominance.

Harmanpreet Kaur has done some magnificent things against Australia, but this has not been a great tournament for her and it ended with a slog-sweep that found deep midwicket to leave India 30 for 4. It was another wicket for Jonassen who, like Mooney, is such a key part of the team but does not always get the airtime of others. Australia could easily have drifted through the closing overs, but their fielding and catching was a final statement of how they peaked when it mattered. Mission accomplished.