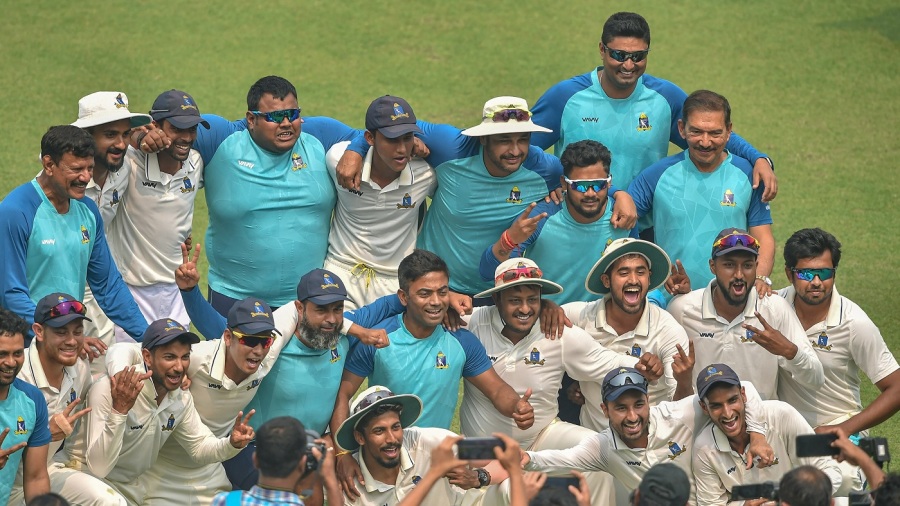 Not even the most passionate Bengal supporter could have seen this coming: a team almost always on the fringes, with a history of differences and infighting, getting together as a unit to pitch for their first Ranji Trophy title in three decades. They last made the final in 2006-07, and only one member of this squad – Manoj Tiwary – knows what it is like to play in one, even if that may not hold much significance.

Saurashtra have now made their fourth final since 2012-13. They are a growing force, a team that has emerged from the shadows of the now-retired Shitanshu Kotak, Cheteshwar Pujara and Ravindra Jadeja. Players have carved out individual identities because they have been given a long rope.

The core of the squad that made that first final in 2012-13, where they were blown away by Mumbai inside three days, is still the same. And youngsters who started to flourish around 2015-16, when they were beaten in their second final, again by Mumbai, are starting to step up and become senior players. Like Prerak Mankad, Chirag Jani.

An association run almost by a family – the Shahs – with Jaydev, the most capped captain in Ranji Trophy history as president, has carried forward Saurashtra’s small-setup-big-thinking philosophy to the next level. They have a small talent pool, only one big centre in Rajkot, and players who come from outside the city are made to feel welcome, just like their inspirational captain Jaydev Unadkat was, straight out of a trial in Porbandar in 2009.

ALSO READ: Chetan Sakariya, the boy who made a ‘rich man’s sport’ his own

This is a contest between Bengal: a side that blew away the tournament favourites thanks to their incredibly talented bowling attack, and one, Saurashtra, that overcame self-doubts at various stages and found an extra kick in the dying moments to eke out a dramatic win, one that left them emotionally drained. They first recovered from 15 for 5 in the second innings, then found a double-century stand hard to dislodge as defeat loomed, only for Unadkat to deliver the knockout blow.

One captain, Abhimanyu Easwaran, is desperate to turn around a horror season that started with a magnificent Duleep Trophy century that briefly attracted thoughts of a Test call-up. But a barren run since, and his nature of dismissals, have left him far behind in the pecking order. Unadkat, meanwhile, is on the cusp of a Ranji Trophy all-time record, having picked up 65 wickets. Another big performance here and an India recall can’t be an impossible dream.

Cheteshwar Pujara has failed to hit a half-century in four innings in Ranji Trophy finals. In 2015-16 against Mumbai, he managed 27 and 4. Last year, he was out for 1 and 0 to left-arm spinner Aditya Sarwate. He’s coming into the match on the back of a disappointing New Zealand tour from India’s point of view. Can he channel all that into a match-winning effort for Saurashtra?

clicked photos with Utpal Chatterjee and Arun Lal, members of the 1989-90 Ranji Trophy-winning team and current members of the support staff, after winding up training. He will be playing his 100th Ranji Trophy game for Bengal. Having recovered from a finger injury that hampered his batting in the semi-final, he’ll want to leave his mark in possibly the biggest game he’s played in recent times. As for form, he has a triple century this season.

Pujara walks back in to Saurashtra’s XI, which will mean at least one forced change. Kishan Parmar, who made 37 and 0 in the semi-finals, could make way.

Bengal will welcome back Wriddhiman Saha, who joined the team on Saturday evening after taking an extra day off to be with his newborn. That means one of Sudip Chatterjee and Shreevats Goswami may have to miss out. Bengal may also consider playing an extra spinner here, which could mean another game for Arnab Nandi, who looked off colour in the semi-final.

It’s a typical Rajkot pitch with a biscuit brown flavour. Day-time temperatures have touched 33 degrees and the surface was covered by a rugsack-like carpet to prevent it from further baking. Both sides reckon a big first-innings batting effort will set the tone for the contest, with spinners coming into the game a little later.

“I’ve forgotten that we won in 1989-90. That was a long time ago. This bunch has the fitness, the fighting belief and spirit. We’re clear of our roles, strengths and are confident. We don’t focus on results. One bad game can’t undo the gains of the season. The pride and passion with which we’ve played has been incredible.”
Bengal coach Arun Lal isn’t willing to let one game define their season

“I was restless on the flight back from Auckland. I kept texting my wife because Jaydev (Unadkat) was on the field. I wanted constant score updates on the final day (through in-flight WiFi). I felt relieved when we finally won. Winning a Ranji final will mean a lot for the region.”
Cheteshwar Pujara on how he felt on his way back from New Zealand