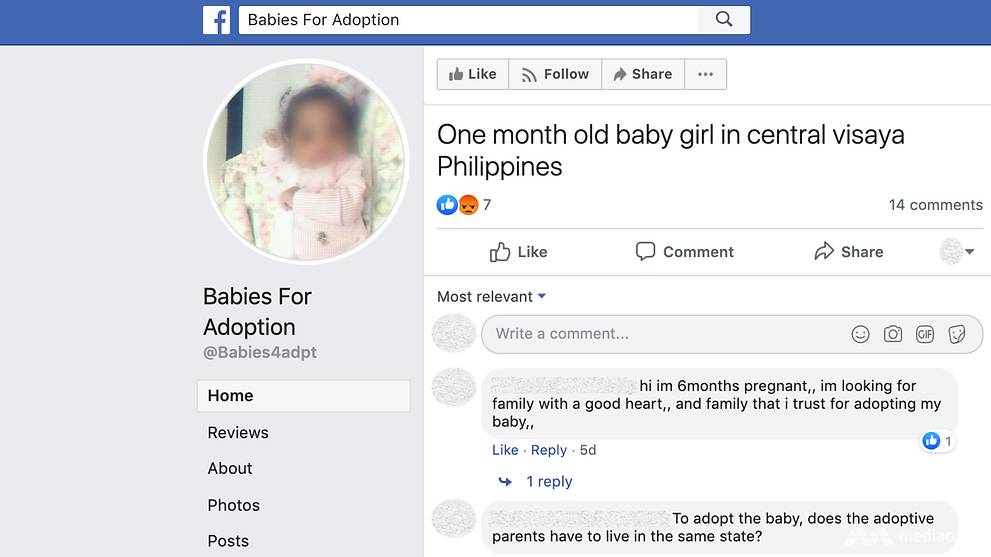 MANILA: At 1.24am on Feb 11, eight-month-pregnant Dalisay sent a private message to a prospective buyer of her unborn child on Facebook.

“Hi Ma’am. Are you willing to adopt?”

She had seen the woman’s comment in a conversation thread on a Facebook page, saying she wants to adopt a child. It was one of many posts on that site where babies – both unborn and newborn – are openly advertised for illegal adoption.

No answer was given until a day later, when the woman came back with questions and a seemingly keen interest. She asked Dalisay if she could see the baby and what she needed to do to adopt the child.

READ: Babies for sale – An investigation into the Philippines’ adoption trade
READ: ‘It’s not that I want to sell my kid. I just need money’ -The Philippine mothers who sell their babies

I’d demand only 50,000 pesos (US$1,000). You don’t have to pay for the hospital because I have PhilHealth insurance. I just want to start a good life with my husband. And we’re also thinking about the good future of our baby.

Dalisay is 21 and her husband is 24. She said they can barely afford to even feed themselves and did not plan to have a child. Both are desperate to find an adoptive parent for their baby and to do so, they have opted to use Facebook, one of the most popular social media platforms in the Philippines, with more than 66 million users nationwide.

Social media is an emerging market for the ‘adoption’ trade, an illegal business in the Philippines where newborn children are bought and sold through the anonymity of the Internet.

Operating behind fake accounts are mothers, brokers and buyers who leverage the loosely regulated platform to traffic children, while hiding their true identity from law enforcement officers.

According to the National Bureau of Investigation (NBI), a leading agency in the national fight against the illicit trade, commercial adoption of children has existed in the Philippines for 15-20 years. However, its expansion online is a recent phenomenon.

Last year, his division intercepted a gang of child traffickers in an entrapment operation. Following a tip-off and long negotiations with perpetrators, officers managed to catch four Filipinos red-handed, selling an infant inside a department store. Two of them were parents of the child, who Aguto said was six days old. The others were brokers who set up a social media account to look for a buyer and negotiated the price.

The gang sold the baby for US$200, the usual going rate in the underground adoption trade. However, based on accounts from baby brokers CNA has spoken to, prices for an infant can range from US$100 to US$1,000 or more.

Commercial adoption of children in the Philippines is legally qualified child trafficking – a serious crime  punishable by life imprisonment and a fine of US$40,000-US$99,000. According to Aguto, the online advertisement of a child for adoption could be treated as “attempted human trafficking”.

Still, a number of such posts can be found on social media sites such as Facebook. During an investigation into the online adoption trade in the Philippines, CNA found several Facebook pages that appeared to facilitate child adoption outside the legal channels. They contained public threads of conversations that openly discussed the details and mechanics of possible transactions, including age, gender, locations and photographs of newborn babies.

“Blatantly, they were discussing online they can buy a baby for this much, how they can go around the laws in the Philippines to kind of ‘adopt’,” Aguto told CNA.

Traffickers would sometimes make it appear as if they worked for the official agency overseeing adoption in the Philippines – the Department of Social Welfare and Development (DSWD) – by using its logo for their profile. One of the cases was reported to the Department of Justice a few years ago and led to the account’s removal by Facebook.

“You can see from the advertisements on that Facebook page that there are babies being offered,” said Yvette T Coronel, deputy executive director of the department’s Inter-Agency Council Against Trafficking.

According to Facebook, the company recently consolidated its existing policies into one dedicated section focusing on human exploitation and continues to remove any of such content as soon as it becomes aware of it.

“We have a zero tolerance policy for human exploitation, including the sale of children for illegal adoption. This is something we take extremely seriously, and we use a mix of proactive detection technologies and community reports to find and remove this content as quickly as possible. We also work with law enforcement in situations where there is immediate risk of harm,” a Facebook company spokesperson told CNA.

The company also confirmed it has removed all the suspicious pages CNA had discovered during its investigation for violating its Human Exploitation policy. One of them, according to the spokesperson, was proactively detected by Facebook’s systems while another was identified as the result of a user report.

For years, the DSWD and law enforcement agencies have traced suspicious Facebook pages and groups to investigate possible commercial adoptions. However, according to the DSWD’s assistant secretary Glenda Relova, most of them emanate from outside the Philippines and operate as closed groups.

“The membership within the groups is closed. So, it’s hard to access without the cooperation of Facebook,” she told CNA.

Another challenge for authorities probing the online adoption trade is the fact that transactions take place behind closed doors. Once a potential buyer or baby broker creates contact with a seller on social media, the conversation is usually taken to a messaging application where they continue to discuss further details in private.

Still, for any transaction to complete, perpetrators are required to reveal certain information such as their bank details and address, which law enforcement officers can use to track them down.

“They need their real identity to get the money. Even if they do a bank-to-bank transaction, they need a real account and that’s one way we can trace them,” Aguto told CNA, adding that the receipt of the child also forces traffickers to come out of their online hiding place.

“They have to have an exchange,” he said. “Somehow, somewhere, they’ll have to give their real identity.”

For Dalisay, she has no idea yet where she will give birth to her son or how she would deliver him to whoever agrees to pay US$1,000 in exchange. In a private message to the potential buyer, the soon-to-be mother suggested the payment can be made through a bank transfer.

“As for me, as soon as the baby comes out, you can register him straight away.”

Dalisay’s name has been changed to protect her identity. This is the final part in CNA’s three-part series ‘Babies for Sale’.