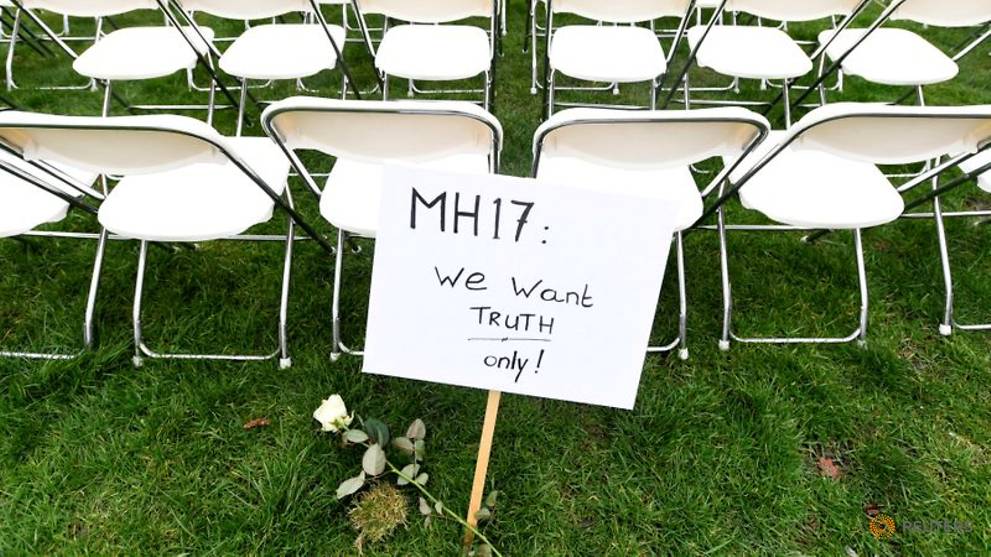 THE HAGUE: Rows of white chairs were placed in front of Russia’s embassy in The Hague on Sunday (Mar 8) in a quiet protest by families of those who were shot down with Malaysia Airlines Flight 17, on the eve of the trial, in absentia, of four men accused of murder for their involvement.

MH17 was downed over rebel-held territory in eastern Ukraine in July 2014, by what international investigators say was a Russian missile sent to help Moscow-backed rebels fight Ukrainian government forces. All 298 people aboard died, including 196 Dutch citizens.

Russia, which has been held politically responsible by the Netherlands and Australia, denies any involvement.

“This is for me a very beautiful symbol for 298 people who perished. They are gone. My brother never returned,” said Piet Ploeg, whose older brother Alex died in the crash.

“The idea of the action is to make perfectly clear to the Russian state that they have to cooperate with the investigation”.

Embassy officials did not comment. Last week a spokesman for President Vladimir Putin said the Kremlin would wait for the outcome of the trial, but that it doubted the objectivity of the Dutch-led investigation.

Those present observed two minutes of silence. White roses were placed on some of the chairs, and placards stood in the field. One read “The truth, the whole truth, and nothing but the truth”, and was accompanied by a single white rose.

Victims have been incensed by Russia’s denials of involvement in the conflict in Ukraine, its vote to block the establishment of a UN court for MH17, and its steadfast rejection of any responsibility for the downing of the plane.

“For us it’s very important that the trial starts, that all the evidence will be presented, and that, in the end, an independent court will reach its verdict. That the world will know what happened, why it happened, and who was responsible. What was the role of Russia,” said Ploeg.

The empty chairs, one for each victim, also symbolised the four suspects’ absence from the court. They are believed to be in Russia, which will not extradite them, and it is not clear whether any of them will conduct a defence.

Lucy van der Kerk, who lost her aunt, said she was glad the trial was happening, but that even a verdict – likely to be years away – would not take away her family’s pain.

“The story will never end for us, because we don’t get our aunt back. Those people, they don’t come back, so it will always hurt.”