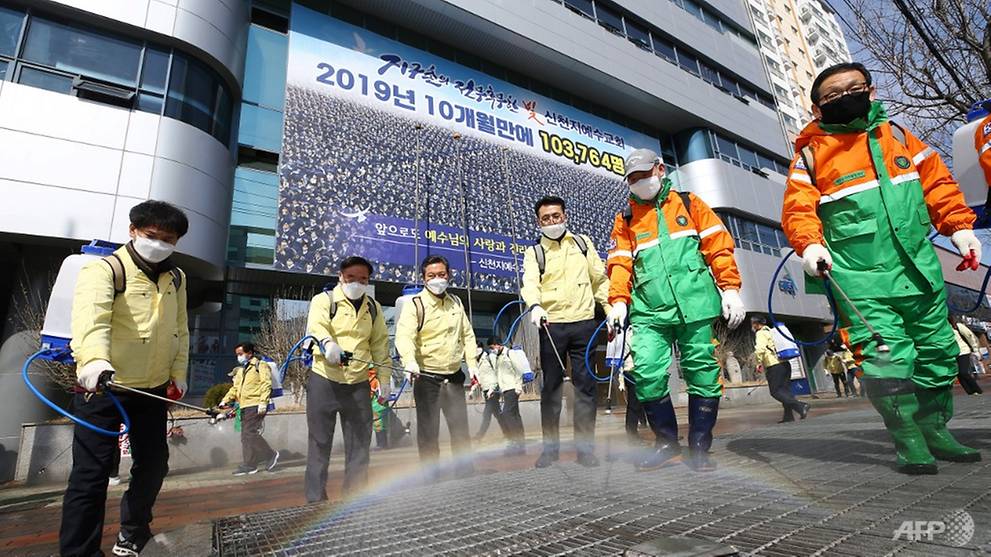 SEOUL: South Korea’s coronavirus cases jumped above 7,000 on Saturday (Mar 7), up by 448 from the previous day, with more than half of the total number linked to a secretive church at the centre of the country’s outbreak, health authorities said.

The death toll rose by two to 46, according to the Korea Centers for Disease Control and Prevention (KCDC).

Since mid-February when a woman tested positive after attending services at a branch of the Shincheonji Church of Jesus in the southeastern city of Daegu, the number of infections has exploded in South Korea, giving it the most cases outside China.

There are 7,041 cases in total including a new small cluster of cases reported on Saturday at an apartment complex in Daegu, where some members of the church live, the KCDC said.

While 448 new cases remains a sizeable jump, it marked a third straight day of declines in the number of new cases for South Korea.

“There is a possibility that new cases increase as tests are still underway,” Kwon Jun-wook, deputy director at the KCDC told a briefing.

Lee Man-hee, the founder of the church, apologised on Monday calling the epidemic a “great calamity”.

The US Commission on International Religious Freedom has voiced concerns over members of the Shincheonji Church being blamed for the spread of the coronavirus.

“We urge the South Korean government to condemn scapegoating and to respect religious freedom as it responds to the outbreak,” it said on Twitter on Friday.

The large amount of infections in the country has prompted nearly 100 nations to impose curbs on travellers from South Korea.

On Friday, South Korea said it would suspend visas and visa waivers for Japan in response to Tokyo’s travel restrictions on Koreans, as fears over the coronavirus reignited a feud between the neighbours dating back to before World War Two.

Dr Mike Ryan, top emergencies expert at the World Health Organization, told a briefing in Geneva on Friday that Japan and South Korea should focus on managing the epidemic and saving lives and not on “a political spat over travel restrictions.”

The coronavirus, which emerged in China, has spread to more than 90 countries, infecting more than 100,000 people and killing over 3,400 people globally.