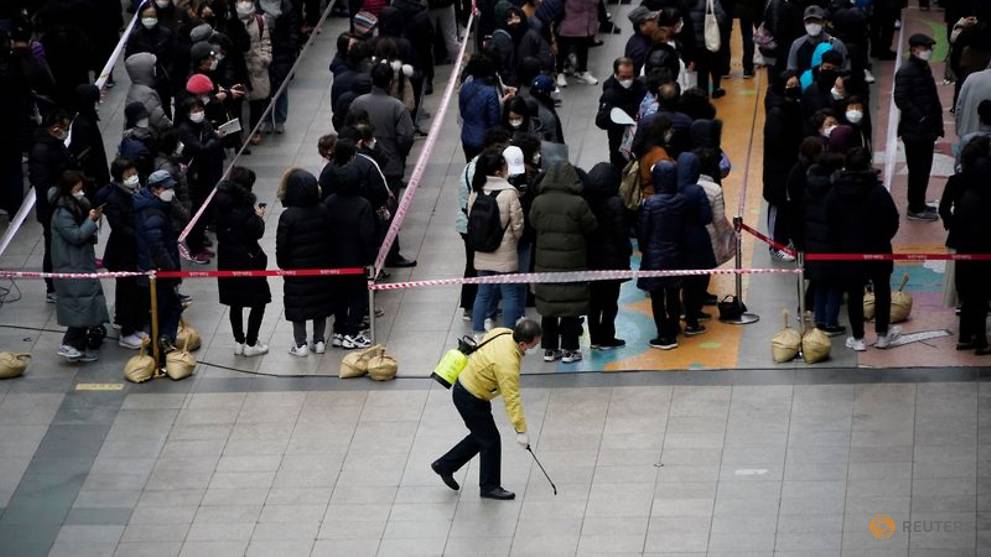 The death toll remained unchanged at 44 from late Friday, the KCDC added.

The number of cases of the contagious disease has spiked in South Korea since mid-February when a 61-year-old woman known as “Patient 31” tested positive after attending religious services at a branch of the Shincheonji Church of Jesus in the southeastern city of Daegu.

South Korea has reported the highest total of coronavirus cases outside China, and around 60 countries and regions have imposed travel bans or quarantine on arrivals from the world’s 12th-largest economy.

More than 90 per cent of South Korea’s cases are in the southern city of Daegu and the neighbouring North Gyeongsang province.

Most of the country’s infections are linked to the Shincheonji Church of Jesus, a religious sect often condemned as a cult, one of whose members attended at least four services before being diagnosed.

Scores of events – from K-pop concerts to sports seasons – have been cancelled or postponed over the contagion, with school and kindergarten breaks extended by three weeks nationwide.

On Friday, South Korea said it would suspend visas and visa waivers for Japan in response to Tokyo’s own travel restrictions on Koreans, as fears over the coronavirus reignited a feud between the neighbours dating back to before World War Two.

Dr Mike Ryan, top emergencies expert of the World Health Organization (WHO), told a briefing in Geneva on Friday that both Japan and South Korea should focus on managing the epidemic and saving lives, but not on “a political spat over travel restrictions.”

The WHO said on Friday all countries should make containing the coronavirus outbreak their top priority.