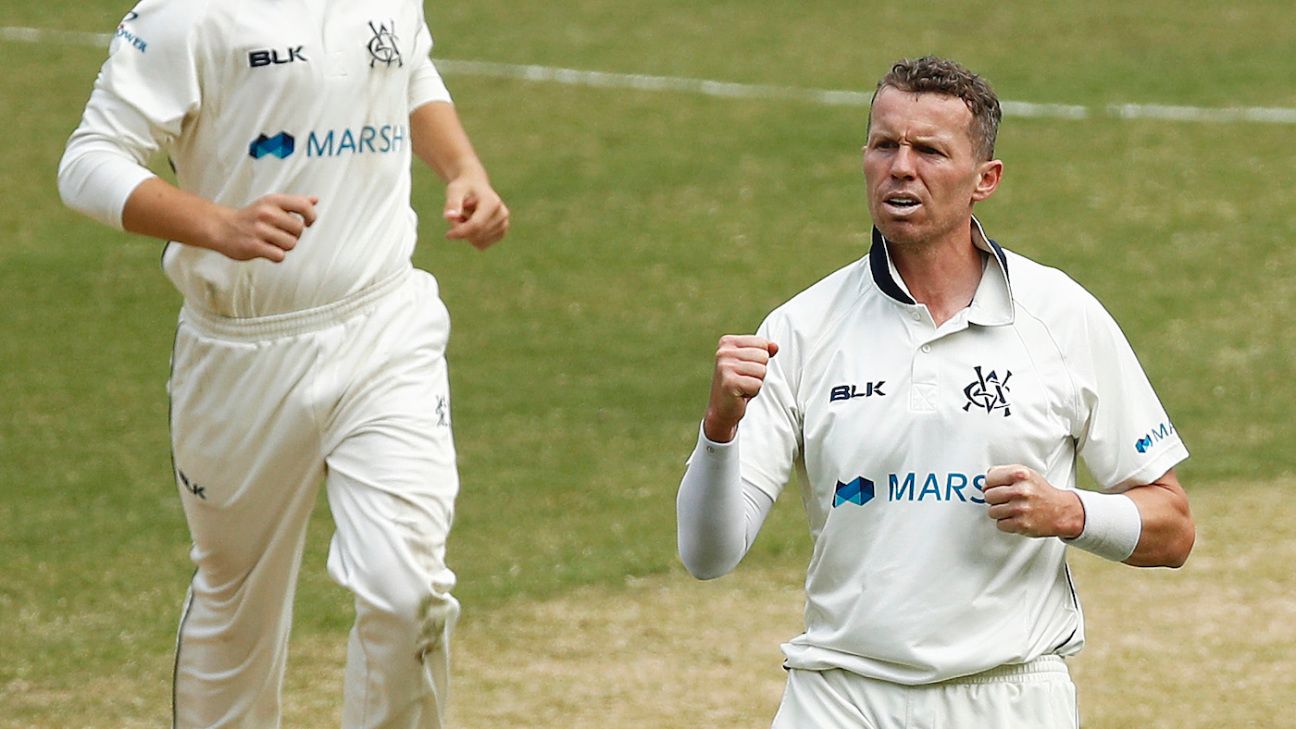 Three wickets each to Peter Siddle and Andrew Fekete has put Victoria in control of their clash with South Australia at Adelaide Oval.

The skilful duo exploited the helpful conditions to put South Australia’s top order under enormous pressure. They took four of the first six wickets between them as the home side slumped to 6 for 123. Jake Weatherald made a very patient 67 from 149 balls but fell to the offspin of Matt Short, gifting a catch to cover.

South Australia’s tail wagged to ensure the first-innings deficit was kept in check with Joe Mennie making 34 and Daniel Worrall 24 to tick the total past 200.

Victoria looked set to reach stumps unscathed with a lead of well over 100 and all ten second-innings wickets in hand but Wes Agar made the late breakthrough with Marcus Harris adjudged lbw for 33 in the penultimate over the day.

A composed 78 from Charlie Wakim helped Tasmania build a first-innings on day two at Bellerive Oval before New South Wales pegged it back thanks to Sean Abbott‘s four-wicket haul.

Wakim made his second half-century in as many matches to help Tasmania to the brink of a first-innings lead. He shared a 99-run stand with Ben McDermott who contributed 46. Wakim was frustrated to depart for 78, hitting a half-tracker to point, with Tasmania still behind at 6 for 181. But Beau Webster continued his excellent form making 48 while Nathan Ellis contributed a handy 20 to push the lead to 75 before Tasmania were bowled out. Abbott and Trent Copeland took seven wickets between them with Abbott claiming 4 for 52.

The Blues were in trouble early in their second innings with Ellis and Lawrence Neil-Smith removing both openers to leave them 2 for 29. But Kurtis Patterson and Daniel Solway steadied with a 68-run stand. Patterson chipped one to mid-on late in the day for 46 but Solway remained unbeaten on 36 as the Blues hope to set the home side a challenging fourth-innings chase.

Bryce Street made his second first-class century to lead Queensland reply against Western Australia in Perth. The opener finished with 115 off 281 balls, an innings of patience, but also strokeplay considering the 11 boundaries it included. Alongside him, Joe Burns was equally compelling and looked set to score a hundred of his own until he was stopped eight runs short by Matthew Kelly in the 60th over. Burns made 93 off 162 balls with 12 fours. The Queensland middle order then went into a wobble, but Sam Heazlett and Jack Wildermuth have stemmed the rot with a 32-run partnership in the 10 overs’ time.