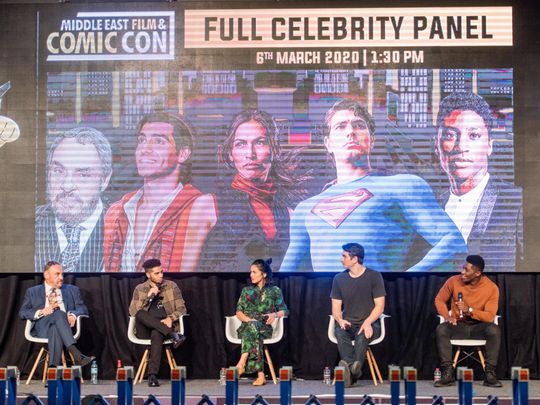 A month ago, when ‘Aladdin’ actor Mena Massoud and ‘Arrow’ actor Joseph David-Jones bumped into each other at a Los Angeles gym, they had no idea they would be sitting together on a panel in Dubai discussing diversity in filmmaking.

Massoud, quoted as saying that he hasn’t booked a single audition since his breakout role in ‘Aladdin’ last year, suggested there’s still a long way to go for Arabs in Hollywood.

“When I started 10 years ago, my first professional union job was Al Qaeda No 2, and I had two lines. So, it’s gotten better,” said Massoud.

“But, if you take a look at the African-American community, for example, they’ve been fighting for their place in Hollywood for decades. Only now are they really starting to take off.”

Massoud added: “I’m trying to be a voice for the North African Arab community. We’ve got to continue to fight for our place in the industry. We’re seeing it with Asians now, too, with ‘Parasite’ and ‘Crazy Rich Asians’. Every group, I think, has got to fight for their rights.”

David-Jones emphasised the importance of having diverse writing rooms and directors.

Massoud agreed, saying, “While it’s great for Rami Malek, Ramy Youssef and I, we need more Sam Esmails in the world.”

The sprightly Rhys-Davies, 75, brought life to the panel, taking each question as an opportunity to jump up from his seat, step up to the edge of the stage and perform a short, theatrical monologue that was in equal measures epic and hilarious.

“The great secret to an audition is to already have a job,” he advised the audience in his penetrating voice.

Notably absent from the panel was Kevin Sussman of ‘The Big Bang Theory’, who was in attendance at MEFCC, and Carice van Houton of ‘Game of Thrones’ fame, who cancelled her appearance at the convention at the last minute.

A JOB I WOULDN’T WANT TO WORK IS…

Rhys-Davis: “Coal miner. My grandfather died in a coal mine. That is a job for real men.”

SOMETHING I RECENTLY ENJOYED WATCHING IS…

Massoud: “‘Succession’. The acting is terrific and very grounded.”

Yung: “‘Judy’. It wasn’t what I expected and [Renee Zellweger’s] performance is incredible.”

Routh: “‘Joker’. [It showed] how mean we can be to each other and how we can do better.”

David-Jones: “‘Parasite’. I was enthralled the whole time. I literally did not know where the story was going to go.”

IF I HAD A SUPERPOWER, IT WOULD BE…

Massoud: “Being invisible would be cool because you watch people without them knowing that you’re there.”

Yung: “The ability to duplicate so I could be here with you guys and at home with my baby. I miss her.”

Rhys-Davis: “The ability not to get annoyed. I could conquer the world.”

Routh: “Flight. Travel the world, get everything from a bird’s-eye view and you see the whole perspective.”

David-Jones: “I spend so much time travelling. I would love to be able to teleport and just be somewhere. That way, I could be here every weekend and see everything in Dubai.” (Rhys-Davis jumps in to add: “You would travel at that [snaps fingers] speed, but then still be at the security line beforehand.” David-Jones laughs, conceding: “Still a coronavirus screening.”)