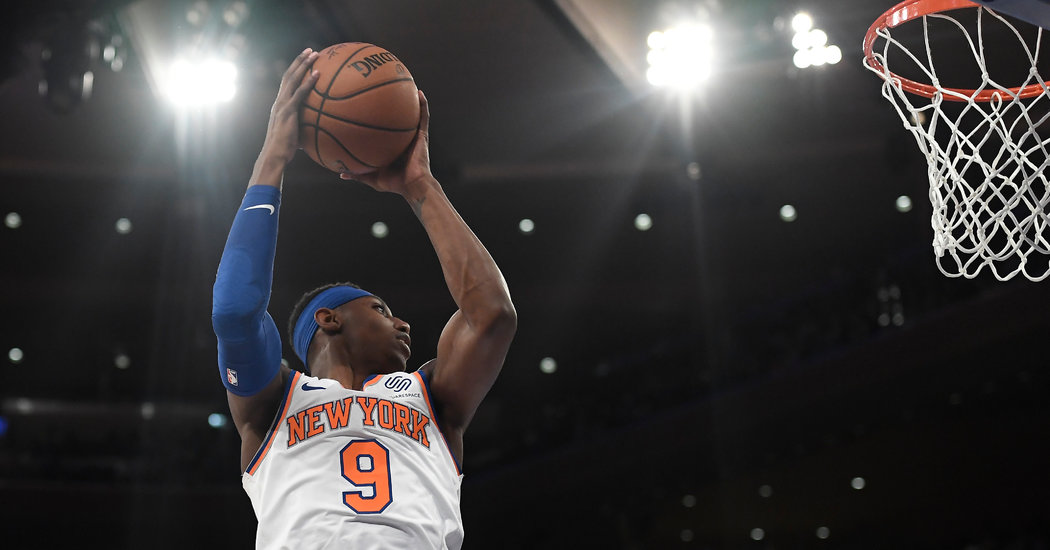 Knicks rookie RJ Barrett was in the midst of one of the best games of his career and he was doing it at Madison Square Garden against the Houston Rockets, a potential finals team. The crowd ate up his creative finishes at the rim, including one late in the fourth quarter that sent the Garden into a playofflike frenzy of jumping and screaming fans.

Barrett finished with 27 points, tied for his career high, and the Knicks won. For most teams, this would have been the story — that Barrett showed flashes of becoming the kind of franchise player that N.B.A. teams hope they can nab with a third-overall pick in the draft.

But Barrett is not a rookie for just any franchise. The next 24 hours after that game on Monday became a bizarre litigation of whether Spike Lee, the director and Knicks superfan, had been mistreated by the team’s owner, James L. Dolan, that night.

Barrett’s performance became a sideshow to the circus that is and has been the Knicks for much of the past 20 years.

That is life as a lottery pick for the Knicks, for whom unusual happenings are the norm and the media buzzards are always hovering. Simply put, being a rookie for the Knicks, a franchise seemingly addicted to chaos in the country’s biggest city, is different from being one for any other team. It can be jarring for young men entering adulthood, and even more so for Barrett — who fans hope will be the centerpiece of a long-desired championship-level team.

“One thing I’ll say about New York is that their fans are very passionate and supportive,” Michael Sweetney, the former Knick, said in an interview. “But they’ll also tell you the truth, too. If you’re sucking and not playing well, they’ll tell you that.”

Barrett is the latest in a long line of players who have tried to make it in New York. But very few do, as many past Knicks lottery picks can attest. This is a city that booed Patrick Ewing in his prime when the team was winning, after all. Veteran leadership and a stable front office matter — and this current iteration of the Knicks has little of either.

Even when the Knicks have played poorly — and over the last two decades, they usually have — the spotlight has never shifted. The media press box is often full, players’ mistakes are magnified and no one is spared from withering mockery in the headlines of tabloids like the New York Daily News and the New York Post.

It is a pressure unique to players in New York. Although pressure, of course, is in the eye of the pressured.

“You all aren’t really all that bad,” Mitchell Robinson, the second-year Knicks center, said of the media with a smile. “Some of you are, but I can’t speak for all.”

Barrett, 19, has so far put together a solid but unspectacular rookie campaign. He was drafted third after Zion Williamson, his teammate at Duke, and Ja Morant, the young star in Memphis. Barrett was averaging 14.1 points a game, 5 rebounds and 2.6 assists on an inefficient .474 true shooting percentage before Friday’s game. And while he will almost assuredly not win the Rookie of the Year Award, he is arguably having the third-best season out of this rookie class — essentially meeting expectations.

Those around the team say Barrett handles any extra pressure with poise.

“He goes out there, he locks in and he focuses in,” Robinson said. “You can see he wants to win and play hard.”

And then there are the fans. New York is a city rife with basketball history, particularly on the playgrounds. The Knicks fan base is dedicated and has for years continued to fill the seats at the Garden, even with an agonizing run of futility: The team will most likely miss the playoffs for the seventh straight year, the longest streak of postseason misses for the franchise since the 1960s.

Sweetney, now a men’s basketball coach at Yeshiva University, had one of his first New York-specific moments when he was walking through Times Square. He saw his face on a billboard advertising Knicks season tickets.

“When you’re in the city, and people notice you, they’re definitely going to say something to you. It’d be weird stuff like ‘Man, how are you going to give up an offensive rebound on that put back?’” Sweetney said with a laugh.

Sweetney, like Barrett, was drafted in the lottery by the Knicks, although a bit lower at the ninth slot out of Georgetown University in 2003. His rookie year was filled with drama as well. Isiah Thomas was hired midseason to run basketball operations, ushering in an ignominious era for Knicks basketball. There were three head coaches in Sweetney’s rookie year alone — Don Chaney, Herb Williams and Lenny Wilkens. The team finished 39-43 that year and was swept in the first round of the playoffs. Sweetney had several veterans in front of him on the depth chart so he did not receive much playing time. His N.B.A. career lasted four years.

“There were so many distractions going on when I was there,” Sweetney said, “Me being a lottery pick and not living up to my expectations was probably the least of their worries.”

Sweetney said a source of counsel for him during that first year was Ewing, a fellow Georgetown Hoya who told him to keep being positive. Sweetney also received guidance from a certain fan.

“Spike Lee wasn’t an ex-player, but he would always give me advice on New York City and what it means to be a Knick,” Sweetney said.

For Barrett, he will likely play for his third head coach next year (David Fizdale was fired in December; Mike Miller has been filling in as interim coach) and is already on his second team president. This year’s Knicks team will finish with a worse record than the one Sweetney played for in 2003.

“My advice to him is to keep being him,” Sweetney said. “Keep working hard. I think he’s built for New York. It’s not New York media, but he played with Zion Williamson. They always had the microscope on them.”

Some Knicks rookies have been drafted in the lottery into a stable Knicks franchise. One of them was Greg Anthony, now a TNT analyst. After having grown up as a Knicks fan, he was picked 12th in 1991. Those Knicks were a perennial playoff team anchored by Ewing and Coach Pat Riley, both future Hall of Famers. Anthony played all 82 games during his first year, coming off the bench and getting used to playing in high-pressure situations. Anthony was 24, and unlike many lottery picks these days he was not just a year removed from high school. That probably helped him.

“The era was different, Anthony said. “You had a lot of media scrutiny, obviously, just because of the market. But I don’t think it carried the same impact it did 20 years ago.”

As a rookie, Anthony said he received tips about how to behave from veterans like Ewing and Charles Oakley. His eye-opening experience of being in New York was watching the Knicks get booed in their first preseason game against the Dallas Mavericks. Anthony would go on to have a 10-year career in the N.B.A., including a role on a Knicks team that made the finals in 1993-94.

“We ran a pretty tight ship when it came to the game and practice so I had great mentorship in that regard, so that was a huge advantage to have, as opposed to what you’re seeing today,” Anthony said. “Look, they’ve already had a coaching change.”

Coaching changes can happen anywhere, of course. But the Knicks have had a particularly rocky season all around, from the front office’s public upbraiding of the team during a surprise news conference after a loss in November to fans’ yelling at Dolan to sell the team after another loss in January. And with only two teammates over 30 — Taj Gibson is 34, and Wayne Ellington is 32 — Barrett doesn’t have a stable of experienced veterans to mentor him.

“He has been really a pro,” Miller said. “He has the right demeanor for it. I think he embraces it and I think he is genuine what he does. With those things in mind, I think he’s done really well.”

If nothing else, Barrett has company on the team — teammates who can commiserate about spending their first year in the Knicks wringer. Robinson, Kevin Knox, Frank Ntilikina and Damyean Dotson were all drafted by the Knicks. Allonzo Trier, now in his second year, went undrafted but was signed by the team. That is atypical in recent years for the Knicks, who have often stocked the franchise with veterans because of a lack of draft picks after poor front office decisions.

Knox, who was a Knicks lottery pick in 2018, said that while there is a “little more pressure” playing in New York, he and Barrett are not fazed: “We all put the jersey on and hoop the same.”

“Me, I played at Kentucky. RJ played at Duke,” Knox said. “We played on big stages in college. Tough games all the time. It’s just another basketball game for us.”