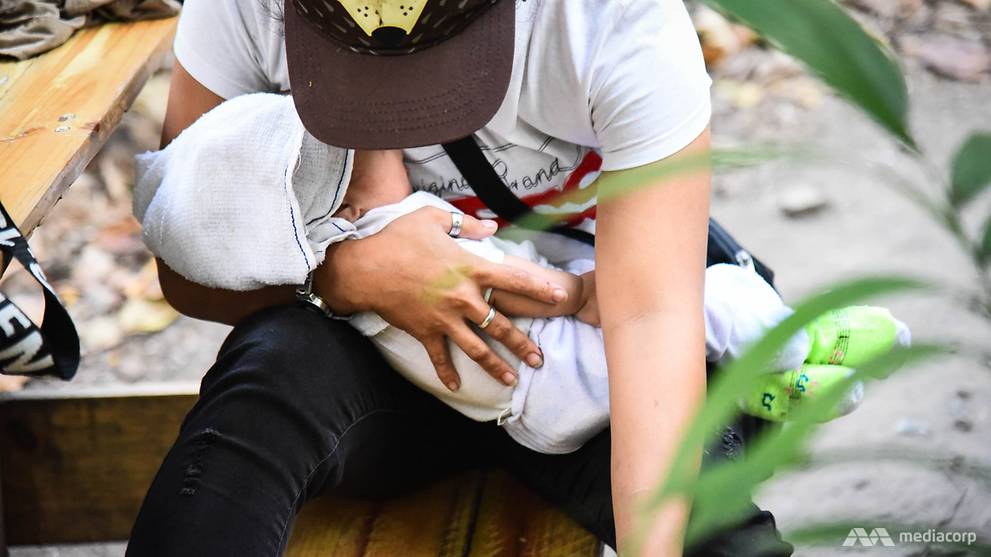 MANILA: Christine holds her baby as she breastfeeds him in a quiet park near the Port of Manila. She has covered his small head with a piece of cloth to shield him from the burning sun. His eyes may be closed but the boy knows his mother is there. He grabs her with his tiny hands as she cradles him in her arms.

The baby is two months old, delicate and defenceless. His father died before he was born and his mother has become his sole protection, his only source of love and security. But he has no idea she wants to sell him as soon as she can.

Christine has decided her baby boy is worth US$200 and whoever can afford the price is welcome to adopt him.

“I could use the money to start a business and sell something. At least something valuable could come out of what I’m about to do with my baby,” said the 29-year-old mother from one of Manila’s slums.

In the wretched community she comes from, thousands of residents live in endless misery. There is hardly any opportunity for them to escape to a better life from their home – rows of dirty shacks sprawling in a labyrinth of alleyways full of rotten garbage, human waste, cockroaches, mosquitoes and flies. Many people collect trash for a living and children often go to bed hungry. Some babies drink water instead of milk because poverty does not spare them.

When Christine became pregnant last year, she knew her baby would struggle from the moment he was born. So, she decided to do what some mothers there have done  – sell her child for illegal adoption.

Commercial adoption of children is qualified as child trafficking under Philippine law. The crime is punishable by life imprisonment and a fine of US$40,000-US$99,000. But despite the severe penalties, law-enforcement officers continue to receive reports on the illicit trade, which mostly concentrates in the country’s poorest communities.

Christine is unemployed and lives with her grandmother, who makes about US$2 a day. Life is already a constant struggle for them, even without the burden of raising a child. She already has eight children from three husbands. Most of them live with another relative elsewhere and hardly get in touch.

For the likes of her, their unwanted pregnancy could open up financial opportunities and let them have a shot at a better life. The mother-of-eight claimed the idea of selling her son is painful but necessary, and that the money could help her start over. For that to happen, however, someone needs to buy him before he grows a stronger emotional bond with her.

“He’s bigger now. I can talk to him,” she said. “I think it’ll hurt more if I push through with this.”

During the investigation into the adoption trade, CNA interviewed baby brokers who have connected various buyers to new mothers in slum areas. Based on their accounts, babies are usually sold when they are a few days old. Buyers prefer them young.

For Christine, commercial adoption should mean nourishment, security and education for her child – the kind of life she can never afford to give him. But it also means she also gets to reap some benefit from the deal.

If you’re interested in my child, I’ll give him to you as long as you give me something.

“Money,” Christine added. “Of course, I need that for my children. It’s not that I want to sell my kid. I just need the money.”

HOW BABIES ARE BOUGHT AND SOLD

The sale of children for adoption is an open secret in poor Philippine communities. When someone gets pregnant without planning to, and does not have enough money for an illegal abortion, an option could be to look for an adoptive parent with cash to offer.

According to the National Bureau of Investigation, the usual going rate for an infant is between US$100 and US$500 and buyers tend to be Filipinos. One of them is Pia, a 42-year-old fisher from a coastal community in southern Philippines. In 2017, she bought a baby boy from a woman in Manila for US$200 after receiving a text message from a friend about an unwanted baby.

“I told my husband about it and he said we should keep the baby,” Pia said. “I tried to get a discount but the mother said it wouldn’t be enough to cover the trip. So I said if I could work something out, I’d send the money. And so I did.”

The adoption trade is largely hidden and conducted through word of mouth. Sellers, brokers and buyers are careful to cover their trail of evidence that could lead to exposure and arrests. Instead of a meeting in the capital, Pia asked for the baby to be delivered in her remote hometown and paid for him through a money transfer agency.

In Manila, CNA met the child’s biological mother, Jasmine. Her baby was turning three months old when she sold him for adoption. Before the exchange, she said she and husband brought their son to Pia’s friends for them to have a look.

“They took his pictures and asked us a few questions. Then the next time we met, we delivered the kid. They had already paid,” she said.

I cried. It was like my chest hurt because of it. I thought ‘So, this is what it’s like to sell a kid’. The pain was indescribable. We stood outside the gate and I looked at them. They were dancing around with the baby. We were both crying.

Despite its commercial aspect, Jasmine views paid adoption as a guarantee for her child’s well-being. She believes whoever could pay US$200 to adopt him would be wealthy and able to give him a better life.

LEGAL ADOPTION: ‘TOO MANY QUESTIONS’

Adoption is allowed in the Philippines as long as it is conducted through the Department of Social Welfare and Development or accredited agencies. Once the practice circumvents the legal channels, which involves both administrative and judicial processes, authorities said it could have an unscrupulous motive that is not based on the child’s best interest.

“That kind of step-by-step process sort of establishes the good intention of the adopter – that you really want this child as your own child and you have to prove it along the way,” said Yvette T Coronel, deputy executive director of the Inter-Agency Council Against Trafficking from the Department of Justice.

On the other hand, if they really want to do the shortcut, that sort of gives an impression that they’re not really sincere in wanting this child, that they want to make a profit out of it quickly. They want the return of the investment quickly just like in business.

Children traded in illegal adoption are considered trafficked under Philippine law. According to the UN’s International Labour Organization (ILO), a number of children around the world are trafficked to become household servants.

“The babies that are sometimes trafficked for adoption are sometimes an exception to this rule, because they may find themselves in a loving home. Often, however, they find themselves being raised for a specific exploitative purpose, for example to work on the family farm or in the family business,” it said in the Training Manual to Fight Trafficking in Children for Labour, Sexual and Other Forms of Exploitation.

However, many Filipinos are still unaware of what constitutes child trafficking or the dangers it could pose to children, according to Coronel. At the same time, she added, the government’s crackdown on human traffickers mostly relies on tip-offs rather than being proactive.

“It’s really hard because trafficking in general as a crime is largely hidden.”

For Christine, legal adoption is not an option and seeking help from a certified child-placing agency will only give her hassle.

“People say they have too many questions,” she said. “I only want to be asked once, like if I want to keep the baby.”

Names have been changed to protect the identities of women in this story. This is the second part in CNA’s three-part series ‘Babies for Sale’. In the final part, we explore how the adoption trade goes online.