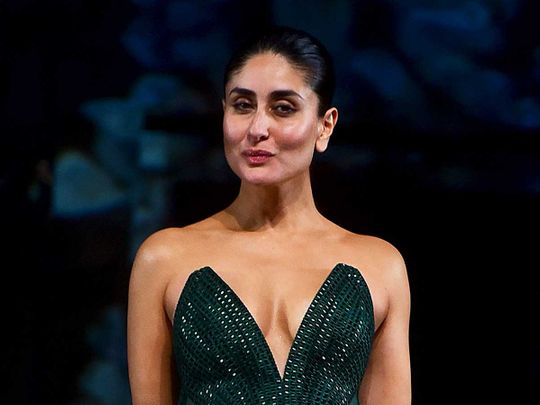 The Bollywood blue blood, who wears her success like a fashionable cape, prompts the elusive question: “Can women can have it all?”

As we observe International Women’s Day on March 8 to celebrate the achievements of women around the globe, Kapoor Khan seems to be the perfect candidate to answer that tricky question.

But the mother of a three-year-old Taimur and one of Bollywood’s highest paid actresses lets us in on a secret.

“I fall, I falter and I get up,” said Kapoor Khan in an exclusive interview with Gulf News tabloid! ahead of the release of her new film ‘Angrezi Medium’, also starring Irrfan Khan and releasing in the UAE on March 12.

“I take it one day at a time. Every day is a journey and every day is a learning experience with your little one and your work. Every day I learn something new … I am a first time mother and I always tell myself that it’s OK even if I did something wrong. I am going to learn from my fall and from all my mistakes. I don’t have a blueprint plan on what’s going to happen in my life or career,” added Kapoor Khan. Her game-plan is superbly simple.

“But I definitely know that I won’t sacrifice a lot of time away from Taimur. I am happy to do just one or two films in a year. I am going to try and select the best movie that I get offered. That’s all there is to it,” said Kapoor Khan.

The 39-year-old may not be armed with a life’s master plan, but there’s no denying that Kapoor Khan — who was born into the first acting dynasty family of Bollywood, ‘The Kapoors’ — is the queen of evolution in Bollywood.

From playing that bratty, entitled Poo (Pooja) in ‘Kabhi Khushi Kabhie Gham’ to playing the feisty Punjabi Geet in the romantic blockbuster ‘Jab We Met’ and then proceeding to play a woman struggling with IVF in the recent hit comedy ‘Good Newwz’, Kapoor Khan is a shape-shifting artist. She also spearheaded the sparkling all-women romantic comedy ‘Veere Di Wedding’ — a tale of four progressive women dealing with love, career and life — and lived to tell its successful story.

A conversation on the phone with her is like a master class in tackling life as a woman who seems to have struck the perfect work-life balance. Gulf News tabloid breaks down the nuggets of wisdom we gleaned from our interview with the actress, who made her debut in Bollywood with ‘Refugee’ in 2000, and is still as relevant in 2020.

Here’s Kapoor Khan’s handy rule book to make it big in life, love and everything in between …

“People have always clubbed actors as this narcissistic bunch. I have taken both success and failure in the same breath. I am too practical a person not to do that. If you see my decisions and career choices in my journey, you will understand the practicality of my brain. That is the way I am. I am pragmatic and I am very proud of it. For instance, when I heard about my part in ‘Angrezi Medium’, I knew instantly that I really wanted to do that film. For me, it’s never been about how big or small my role is in a film, it’s about the experience. I have always been a confident actor and I just do the best of what I can do.”

Rule No 2: Always be greedy for good work

“No matter how big or small my part is in a film, an actor will always remain an actor. An actor rises above their parts and the key is to make something great out of it. In ‘Angrezi Medium’, I play a cop. It’s a small part, but I hope I have made something significant and memorable out of that small role. Even if you play a small part in a relevant film, then you have done your job.”

Rule No 3: Never analyse or overthink your own success

“I have never really analysed my own success, but it has been such an exhilarating journey. There have been so many ups and so many downs in my career and they balance itself out. The ups and down have kept me grounded. I don’t know what the key to success is. But all I know is that have been here 20 years in Bollywood and not many actresses have been able to do that. I honestly feel my staying power is more to do with re-invention and the rejuvenation of my mind. And, that has allowed me to last so long and that has allowed me to evolve. I am constantly trying to refresh my mind and I am always trying to get away from the insular, toxic Bollywood world. I come back to it when I am ready again. I am happy that I have the ability to do that and that has kept me sane.”

Rule No 4: Never take your education for granted and it’s never too late for college

“I have always taken my education for granted. I regret that I never had the opportunity to complete my studies. That is something that will always be there in my mind. I didn’t complete my education although I could have easily done so. Now, I am married to Saif [Ali Khan, a cerebral actor] and that makes me wish that I had completed my education. I was in such a rush to join films that I didn’t focus on my education. But it is never too late as Saif says. Even at 50 years, I can decide to attend college to learn. That’s something that is unfulfilled and something very close to my heart.”

Rule No 5: Always trust your instincts

“Both Karisma [her older sister] and I joined the world of films at a young age. These days, girls are a lot more seasoned, cautious and sharp. But there are no regrets there. I rely heavily on my instincts and emotions. I am not a method actor per se. I love cinema and acting so much that I can easily flip in and flip out of characters. Acting is something that I enjoy doing so much … I hope I have 20 more years of acting to do.”

What is ‘Angrezi Medium’?

Directed by Homi Adjania, Kareena Kapoor Khan will be seen in Irrfan Khan’s comeback film ‘Angrezi Medium’. The movie chronicles a father’s quest to send his daughter to a university outside India. While Kapoor Khan plays a small role in the film, she claims it was her greed to work with Khan that prompted her to agree to be a part of this warm film.

“I needed to tick that box. Since I have worked with all the Khans, I didn’t want to miss the golden opportunity to be in the same frame as Irrfan. Never go by the length of your role.”

‘Angrezi Medium’ is out in the UAE on March 12.