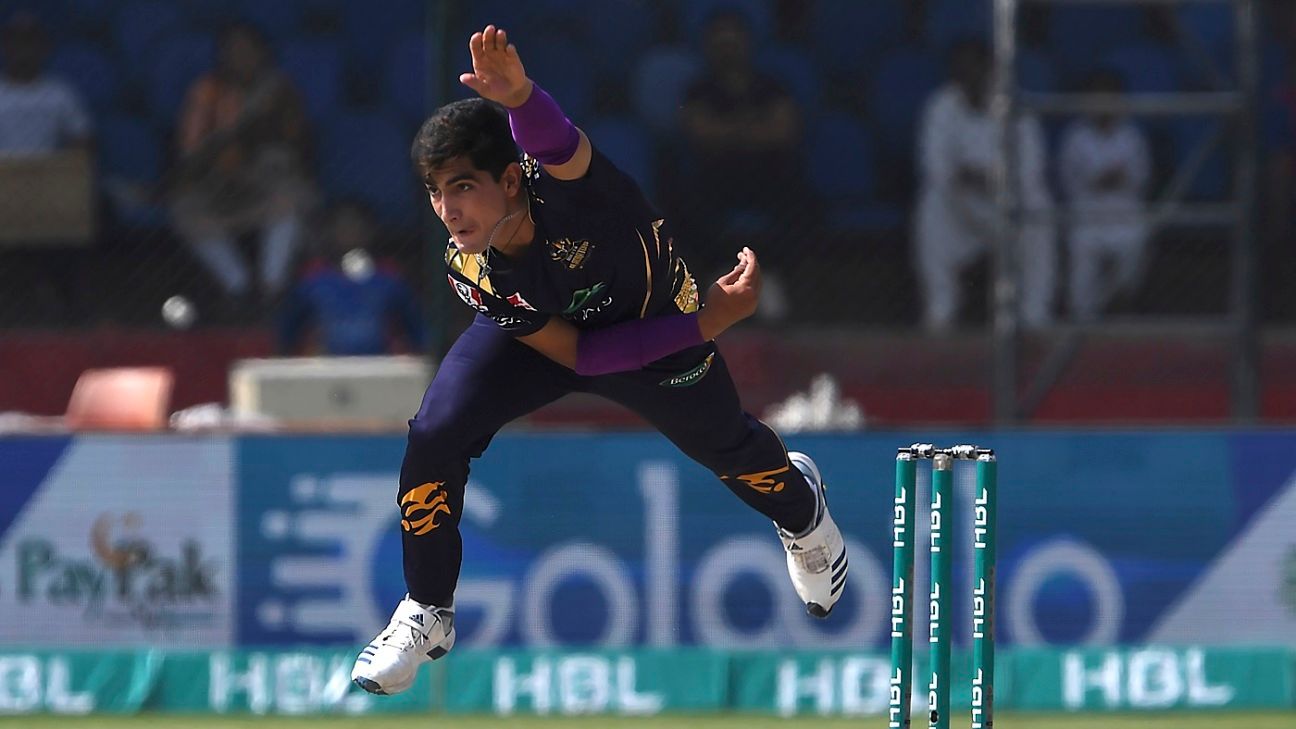 The injury suffered by Naseem Shah on March 5 during the PSL game between Quetta Gladiators and Peshawar Zalmi will see him miss the next week of games as doctors have advised him to rest for seven days. In the game, he walked off the ground after bowling two overs, and didn’t take the field again. It was later learnt that he had sprained his left ankle.

The Quetta management informed the Pakistan Cricket Board about Shah’s situation and put him on rehabilitation with physiotherapist Nisar Khan. The management confirmed that his sprain is minor and not serious enough to ask for an immediate replacement. However, they named legspinner Zahid Mahmood as cover for Shah while he recuperates.

ESPNcricinfo understands that the Pakistan national team’s management has raised concerns about Shah’s workload of playing back-to-back games in the PSL. Shah is an integral part of Pakistan’s plans for the World Test Championship, and the management had earlier urged the PCB, among other suggestions, to even monetarily compensate the teenager for the PSL games he was going to miss, to preserve him ahead of the national assignments. Late last year, Shah was pulled out of Pakistan’s Under-19 World Cup squad for the same reason.

“We haven’t decided about any replacement yet because we are hopeful that he will recover before our game against Multan Sultans in Lahore [on March 11],” Azam Khan, Quetta manager told ESPNcricinfo.

The bowling workloads of Shah, who turned 17 last month, have been the subject of scrutiny given how young he is – he has only played seven first-class matches outside of the four Tests. Over the last three months, he has made major strides in international cricket, holding records for the youngest to have taken a Test hat-trick and the youngest fast bowler to have taken a five-wicket haul.

With all the success, injuries have continued to follow him too. After debuting in the first Test of the series in Australia last year, he missed the second Test, as a precaution after he complained of a knee niggle in the nets. Before he broke through, in 2018 he was sidelined for a large part of the season with a back injury, even forcing him to miss the PSL that year.

After his spell against Bangladesh that brought him a hat-trick, he soon felt pain in his right rib cage and was taken to hospital for an MRI scan. There, however, he was cleared from any serious injury and was asked to rest ahead of the PSL. He went on to play five T20s for Quetta, taking only three wickets. If he does not play any further part in the tournament, his next major assignment will be the second Test against Bangladesh next month in Karachi.