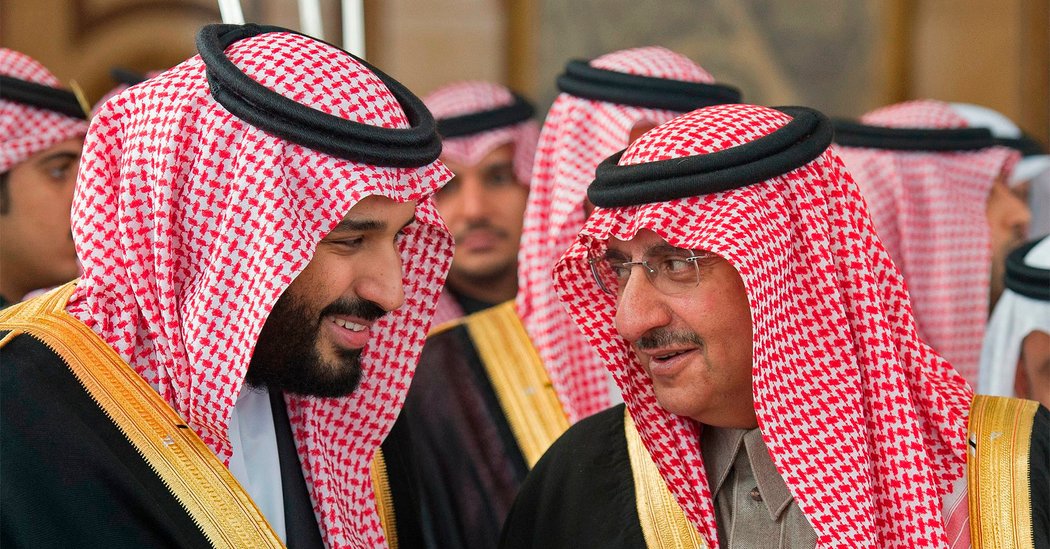 At least four Saudi princes have been ensnared in a wave of detentions ordered by Crown Prince Mohammed bin Salman, a person close to the royal family said Saturday.

Prince Nayef bin Ahmed, who held senior positions in the military, was detained on Friday along with at least three other senior members of the royal family. The full extent of the roundup remains unclear.

Analysts who follow the royal family said Saturday that the latest wave of arrests raised questions about whether Crown Prince Mohammed would soon seek to take formal power from his aging father, King Salman, 84.

Others suggested that the crown prince, who has established himself as the de facto ruler of the kingdom in the name of his father, was worried about discontent within the royal family as plummeting oil prices strained the country’s budget and economy. They say he may have ordered the roundup in part because he feared a challenge to his power.

Prince Nayef has held positions in the interior ministry and military and once headed army intelligence, according to a Saudi military website. But he did not appear to have any position in the government at the time of his detention.

He was detained together with his father, Prince Ahmed bin Abdulaziz, who is the last surviving full brother of the king.

Crown Prince Mohammed, 34, has established a track record of bold and ruthless moves with few precedents in the modern history of the kingdom. He has led a five-year military intervention in Yemen that has created one of the world’s worst humanitarian disasters without any sign of victory.

He also has cracked down on the privilege and clout of his own sprawling royal family in order to tighten his own grip on the kingdom, including by detaining hundreds of wealthy princes and businessmen in a Ritz-Carlton hotel that he repurposed as a prison. He demanded that they turn over large sums of their wealth as part of what he portrayed as a crackdown on corruption.

Outside Saudi Arabia, the prince is best known for his association with the killing of Jamal Khashoggi, a dissident and newspaper columnist, by Saudi agents in the Saudi consulate in Istanbul in 2018.

But even for Prince Mohammed, the detention of his uncle, Prince Ahmed, startled many analysts.

“It is surprising he would move on Prince Ahmed with the king’s authority still there,” said Kristin Smith Diwan, a scholar at the Arab Gulf States Institute in Washington.

The recent wave of arrests has sent tremors of fear through the family and raised questions about the status of the king, three people close to the family said Saturday.

The king was photographed in recent days meeting with the visiting British foreign secretary. A doctor with ties to the Saudi hospital that treats many royals said the hospital had received no word that the king was ill.

Prince Ahmed had appeared for a short time in the fall of 2018 to be a potential rival to the crown prince. But Prince Ahmed swiftly disavowed such ideas and his status as a full brother of the king had appeared until now to provide him a certain degree of immunity from the wrath of his nephew, Crown Prince Mohammed.

He was nonetheless detained on Friday, days after he had returned from a falcon hunting trip abroad. His son, Prince Nayef bin Ahmed was with him at the time, a person close to the family said Saturday.

Prince Mohammed bin Nayef, a former crown prince and former interior minister who had close ties to American intelligence agencies, was also detained. He had effectively been under house arrest since being forced out of his previous posts by the current crown prince in 2017.

His younger brother, Prince Nawaf bin Nayef, was also taken by security officers. Prince Ahmed, Prince Mohammed bin Nayef and Prince Nawaf were all arrested on Friday, according to three people familiar with the matter.

“It looks like MBS is just taking out all rivals,” said Michael Stephens, a scholar at the Royal United Services Institute, using the initials for the crown prince.

“It is either the case that the king is on his death bed or MBS just thinks this is a good time to bury the bad news,” he added. “But the problem is that after the Khashoggi murder, trust in the kingdom of Saudi Arabia is very low and no one will believe the official narrative.”