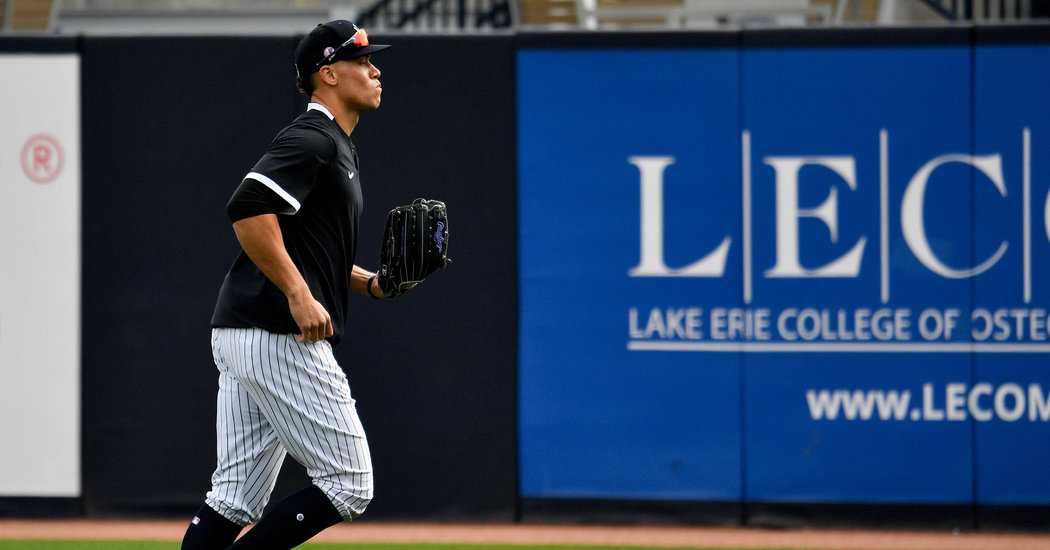 TAMPA, Fla. — A frustrated Aaron Judge on Thursday publicly discussed his shoulder and chest muscle injuries for the first time, but was unable to provide much clarity about what is causing his discomfort.

Judge confirmed that he had pain in both his right shoulder and his right pectoral muscle, but said there had been no definitive diagnosis.

“That’s what is making it tough trying to describe what I’m feeling,” Judge told reporters at the Yankees’ spring training complex. “I haven’t got a definite answer of what’s going on yet.”

Judge, 27, first noticed the shoulder problem in January while taking batting practice before spring training. He rested the shoulder and thought the trouble was behind him, but then the chest injury appeared last week while he was hitting in the batting cages.

Since then, he said, the problems have gone back and forth, raising his level of uncertainty and concern over what is causing the pain.

Brian Cashman, the Yankees’ general manager, has said that Judge underwent a battery of tests, but he did not specify what kind.

It has not been a good spring for the Yankees from a health standpoint. Luis Severino, one of their top pitchers, is lost for the season after having Tommy John surgery. James Paxton, another starting pitcher, is expected to be out until June after a back operation, and outfielder Giancarlo Stanton strained his right calf.

Stanton, who played in only 18 games last year, is not expected to be ready for opening day, March 26 in Baltimore. Judge has not ruled out the possibility that he could be ready in time for that game, but the more pressing issue is finding a diagnosis.

“We’ve just got to get answers first,” Judge said.

Last year, Judge was limited to 102 games because of an oblique strain, and in 2018 he played in 112 after he was hit by a pitch that fractured his right wrist. He hit 27 home runs in each of those seasons. In 2017 he played in 155 games, hit 52 home runs and won the American League Rookie of the Year Award.

“I’m pretty frustrated with it,” he said of the current situation. “I want to be out there with my team battling and supporting them on the field. Hopefully, that’s why we’re talking to a lot of doctors, trying to get some answers.”

Aaron Boone, the Yankees’ manager, agreed that the focus was not so much on whether Judge will have to start the season on the injured list, but on discovering the source of the problems and finding a solution.

“I want to know what we’re dealing with,” Boone said, “and hopefully have a time frame in place that, ‘OK, this is how long it’s going to be before he’s back doing anything.’ Then we’ll be able to better make those evaluations.”