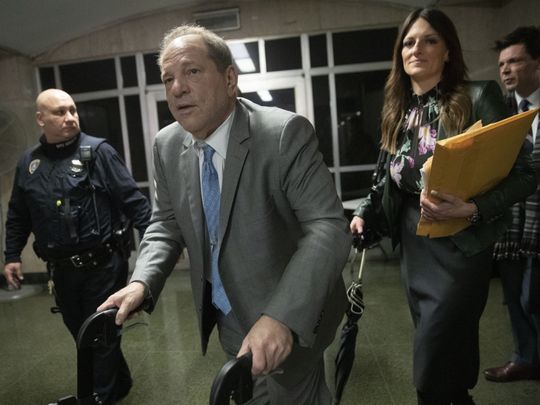 The 67-year-old ‘Pulp Fiction’ producer had been in a Manhattan hospital since his landmark conviction on February 24 after he complained of chest pains following the verdict.

Weinstein — whose films won multiple Oscars — was transferred to an infirmary ward at Rikers following an operation, his spokesman, Juda Engelmayer, said.

“He had a blockage removed,” Engelmayer said. Multiple US media reported that Weinstein had had a stent installed.

Weinstein was found guilty of a criminal sexual act in the first degree and rape in the third degree following a high-profile trial that lasted several weeks.

The #MeToo movement against sexual misconduct hailed the verdict as historic but Weinstein’s team say they plan to appeal.

A jury convicted him of forcibly performing oral sex on former production assistant Mimi Haleyi in 2006 and of raping ex-actress Jessica Mann in 2013.

He was cleared of the most serious charges of predatory sexual assault but faces up to 29 years in prison when he is sentenced on March 11.

Rikers is one of America’s most high-profile prisons and has incarcerated celebrities including Sid Vicious of the Sex Pistols, rapper Tupac Shakur and former International Monetary Fund managing director Dominique Strauss-Kahn.

The sprawling complex, known for regular violent incidents against inmates and guards, is due to close by 2026.