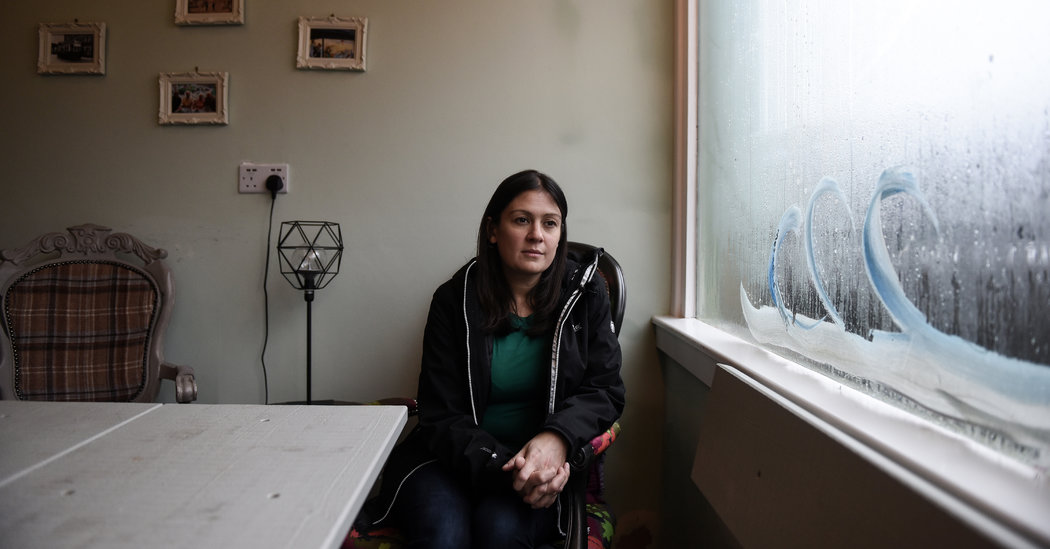 SOWERBY BRIDGE, England — Shaking the raindrops from her waterproof jacket, its oversized hood nearly covering her eyes, Lisa Nandy bundled into the Willow Cafe with a smile and an easy hello.

Ms. Nandy, 40, a Labour politician, is vying for her party’s leadership and was here to meet with residents of this small town in West Yorkshire that had been devastated by flooding days earlier.

As she sat with local leaders over a cup of tea to discuss the impact and the logistics of rebuilding a region in crisis, her brow furrowed as they listed their concerns.

But another crisis was also front of mind for Ms. Nandy: the one facing Britain’s Labour Party, which is still reeling from a December election that saw its support base in northern England crumble and delivered its worst result since 1935, spelling the end of Jeremy Corbyn’s leadership.

“I said when I launched the election campaign, if Labour doesn’t change, we will die and we will deserve to,” she said in a recent interview. “And I think it is that serious for the Labour Party.”

Younger, female and from the north of England herself, Ms. Nandy — the daughter of Luise Fitzwalter, a former journalist and local Labour councilor, and Dipak Nandy, a prominent Marxist academic born in India — is a portrait of just how different the party leadership could look.

Though she often jokes that at home she is considered the one on the right, she is a socially liberal, center-left contender in a field that leans further to the left.

Her remaining rivals — Keir Starmer, Labour’s Brexit policy leader under Mr. Corbyn, and Rebecca Long-Bailey, who served as Mr. Corbyn’s business secretary — are seen as more closely aligned with the party’s left wing, and Mr. Starmer is considered the clear favorite to prevail.

But with analysts pointing to the Labour’s betrayal of its working-class roots in England’s industrial north and a slide toward London-centered left-wing politics under Mr. Corbyn as the reason for its steep losses, Ms. Nandy offers an alternative — albeit most likely for the future. She is calling for change within a party that she sees as “far too top-heavy” and “far too disconnected.”

Arguably the least recognizable of the candidates heading into the contest, she made waves with a formidable performance during a sit-down with the famed BBC interviewer Andrew Neil in January. (Prime Minister Boris Johnson’s refusal to appear on Mr. Neil’s show caused a stir ahead of the general election.)

Since then, Ms. Nandy’s momentum has continued to build. In a straw poll of the audience after the most recent Sky News debate between the three candidates, Ms. Nandy was the clear crowd favorite. Speaking on BBC, the prominent political commentator George Monbiot described Ms. Nandy as his preferred candidate with “a lovely touch” who “gets the collaborative nature of what politics now need to be.”

During her visit to Sowerby Bridge, she won the praise — if not the outright endorsement — of Holly Lynch, the Labour lawmaker who represents the area.

“I think what Lisa is saying and what she is doing absolutely resonates with people,” Ms. Lynch said as the two toured a local cheese factory that had been disrupted by the flooding. She described Ms. Nandy as “grounded” and “quite funny at times, qualities that you don’t see in leaders of political parties.”

Whether that praise will translate to votes as members begin casting their ballots remains to be seen, and a recent opinion poll from the YouGov research group confirmed that Mr. Starmer remained firmly in the lead ahead of Labour’s announcement of its new leader on April 4.

But for now, Ms. Nandy is having a moment.

This ethos at the core of her leadership pitch emphasizes a shift in the party’s focus to Britain’s largely working-class towns and smaller cities that are often left behind, a move that she believes Labour must make in order to survive.

As industry disappeared from these former mining and manufacturing communities over the past four decades, young people left for the big cities, leaving behind overwhelming numbers of older voters who feel disconnected from the political system, she said. At the same time, the party’s other main wing of socially liberal urban youth face their own issues of high housing costs and strains on public services.

She believes she is the right candidate to offer those solutions by “investing in one area in order to alleviate the pressure on others,” an approach that, as she puts it, “solves a whole set of problems.”

Ms. Nandy was born in Manchester and grew up there and in the nearby town of Bury, and has spent the last decade representing the northern town of Wigan, where she lives with her partner, Andy Collis, and their 4-year-old son, Otis.

Liberal politics have always been part of her life. Her father was born in Kolkata and came to Britain in the 1950s to study at the University of Leeds. (Running short of money, he was taken in there by one of his professors, Arnold Kettle, an avowed communist and father of Martin Kettle, who is now a columnist with The Guardian.)

Mr. Nandy went on to become the first director of the Runnymede Trust think tank on race and helped draft Britain’s Race Relations Bill of 1976.

Ms. Nandy’s pedigree also includes her maternal grandfather, Frank Byers, who was a Liberal member of Parliament and went on to lead his party in the House of Lords. Her stepfather, Ray Fitzwalter, was a revered investigative journalist.

She lived her early adult years in London and worked at homelessness and children’s charities before entering politics.

But her goal is to make it clear that she is listening to both sides of the party, evidenced by this tour of Sowerby Bridge — trailed by a cameraman from her campaign — where the plastic bags and debris still clung in the branches of trees along the Calder River, a reminder of how high the floodwaters had risen. Mr. Johnson had been criticized for opting out of a visit to this part of West Yorkshire, and business owners described feeling neglected.

Despite what Ms. Nandy described as the “relentlessness of the process” of campaigning across the country, she has made it her mission to show that she is listening.

“This is the last moment where people in towns like mine are looking at us to see if we’ve got it,” she said, “and I am determined that they are going to hear that from us.”

During a meeting with party members in the upstairs room of a pub later in the day, she made her pitch to a crowd of two dozen people, mostly in their 60s and 70s, who listened as she spoke of the party’s existential crisis.

“This has been a really long time coming,” she said of the recent election failure, “and I don’t think the Labour Party has had an honest reckoning with how deep this is and how long and how far back the roots of this go in communities like mine.”

In a room of people who looked nothing like her, she embraced her identity as a youthful, mixed-race, female candidate — even nodding to her well-documented love of Britney Spears, as the only candidate whose fandom made national headlines.

“Now, I know for a lot of members this is a bit of a leap, because there’s never been a leader who looks or sounds like me,” she said, before pointing to the successes of young female leaders in New Zealand and Finland as proof that change is possible.

But despite her appeal, Ms. Nandy and her supporters acknowledge that her candidacy is a long shot. Linda McDougall, the wife of the former Labour lawmaker Austin Mitchell, was in the crowd and offered her support.

“But it’s a tough one, isn’t it?” Ms. McDougall told the candidate. “You need a miracle.”