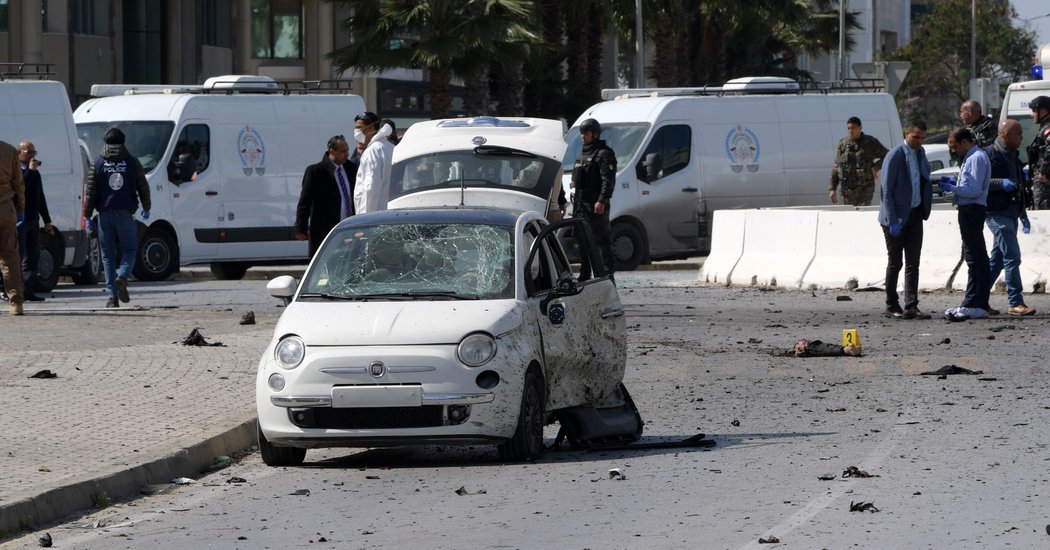 Two suicide bombers blew themselves up near the United States Embassy in Tunis on Friday, injuring five police officers and one civilian, according to officials.

“Emergency personnel are responding to an explosion that occurred near the U.S. Embassy in Tunis,” the embassy’s account posted on Twitter. “Please avoid the area and monitor local media for updates.”

The Tunisian Interior Ministry said in a statement that two men had approached a security patrol across the street from the embassy and detonated explosives around 11 a.m. local time. No group had yet claimed responsibility.

The attack took place in the business district of the Lac, an area in the east of Tunis, the capital, which is home to several embassies and offices of international institutions.

Tunisia was the birthplace of the 2011 Arab Spring uprisings, and has sustained a sometimes fractious transition to democracy since those protests deposed its authoritarian ruler, Zine El Abidine Ben Ali. But it has become a target of Islamist militants, with three major attacks in 2015 that were claimed by the Islamic State and killed dozens of people.

The attackers on Friday drove a motorcycle toward a police truck, which was parked near the embassy and was damaged in the explosion.

Security forces cordoned off the area, as debris could be seen on the road by the embassy, along with human remains believed to be from the attackers.

Tunisia had one of the largest contingent of militants to join the ranks of Al Qaeda and the Islamic State, also known as ISIS, with at least 5,500 citizens going to Syria and Iraq. As many as 1,500 fighters flowed to neighboring Libya.

The U.S. Embassy in Tunis was attacked in 2012 by crowds protesting an anti-Muslim video.

In recent years, Tunisia has struggled to control a threat from Al Qaeda and other Islamist groups. It remains under a state of emergency, and porous borders with Algeria and Libya have allowed militants to leave and return.

Tunisia’s security and police forces have also been the target of smaller-scale attacks. Last June, two suicide bombers set off explosions in separate attacks in Tunis, killing a police officer and wounding eight people. The two attacks were directed a police patrol and a police station.

In October, 2018, a woman injured 15 people, including 10 police officers, when she blew herself up in central Tunis.