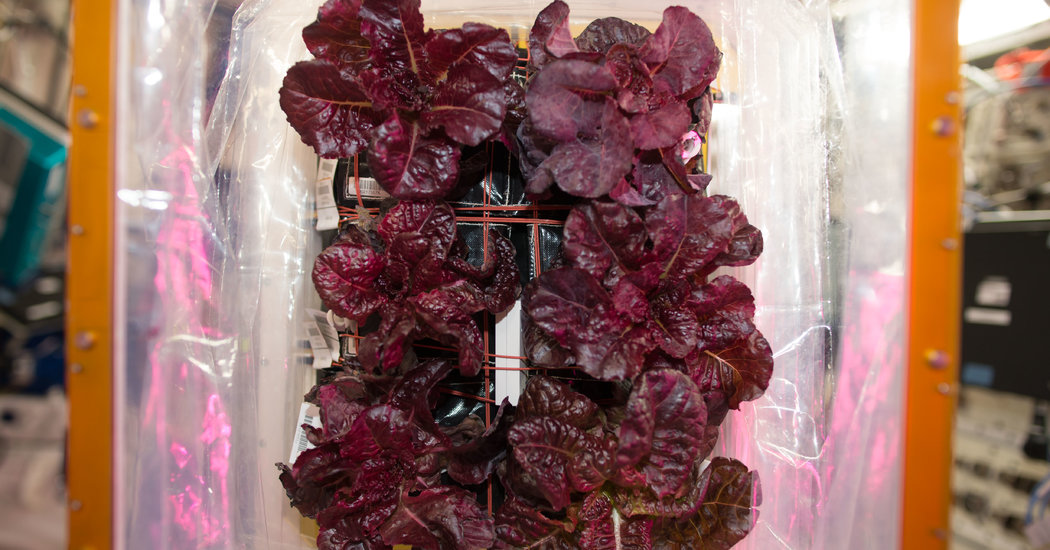 When astronauts head for Mars, perhaps sometime in the 2030s, there is a good chance that they will be growing their own vegetables to eat along the way.

In research published on Friday, researchers are reporting that lettuce grown in space is safe to eat and as nutritious as that grown on Earth.

“This was really good,” said Gioia D. Massa, a plant scientist at NASA’s Kennedy Space Center in Florida and an author of a paper that appeared in the journal Frontiers in Plant Science. “There wasn’t anything completely surprising or crazy or weird.”

At present, most of the food that astronauts eat at the International Space Station is prepared on Earth and sent up in packets. Deliveries of fresh produce arrive on cargo rockets, allowing the crew to enjoy some salad.

But for a longer, more distant mission to Mars, which might last three years, that would not be possible. Indeed, food and other supplies might be sent ahead of time, meaning the meals might be sitting around for five years before the astronauts eat them.

“It’s going to be old by the end of that mission,” said Grace L. Douglas, lead scientist for advanced food technology at NASA’s Johnson Space Center in Houston.

By that time, some of the nutrients and taste will most likely have decayed. And if astronauts do not enjoy what they are eating, they may eat less, potentially setting off a cascade of negative health consequences including loss of weight and muscle and damage to the cardiovascular system.

“We don’t have a system that will meet the requirements currently,” Dr. Douglas said.

The space agency is trying to develop processed foods that last longer, as well as methods for efficiently growing crops in a weightless environment. If that requires too much work, it would not be an effective use of an astronaut’s time.

“You want them out exploring,” Dr. Douglas said, “and not worrying about their next meal.”

Enter Veggie, a plant growth chamber aboard the International Space Station since 2014. Dr. Massa’s paper analyzes lettuce experiments from 2014 to 2016. (The space station astronauts did not wait for the final scientific analysis for safety assurances. In 2015, they ate part of their harvest.)

Since then, Veggie has also nurtured other plants including Chinese cabbage, zinnias and mizuna.

This is not the first garden in space. Astronauts have been growing plants in space for decades, but it is not easy without gravity. For one, instead of gravity dragging water down to the roots, droplets instead hover and adhere to leaves as easily as to roots.

“You tend to get challenges in watering your plants where we can get too much water or not enough water,” Dr. Massa said. “Water coats your surfaces. It will clog the pores of things. It will even crawl up the plants if you have too much water.”

Inside the Veggie chamber, the lettuce grew not in soil but in a porous ceramic clay that traps air and water around the roots. “It’s the same material that’s on a baseball field, what you have between the bases,” Dr. Massa said.

LEDs provided nourishing light, and wicks, taking advantage of the surface tension of water, guided water to the roots.

The low-gravity red lettuce was as healthful as its counterparts grown on Earth and even contained somewhat higher levels of compounds known as phenolics, which are believed to be healthy for the people who eat them because they act as antioxidants.

Plants produce more phenolic compounds when they are stressed, and that might have been the result of growing in the unearthly environment without gravity. But the differences fell within the margin of error, and the number of plants grown were too small to come to convincing conclusions.

The researchers also performed DNA analysis to survey what microbes were living in and around the plants grown on the space station. That, too, proved reassuring. The microbes appeared to be similar in diversity to what was seen on Earth, and there were no signs of pathogens like salmonella that occasionally contaminate crops.

“It’s just a rigorous, careful study on the safety of crops grown in space,” said Bruce Bugbee, a professor of environmental plant physiology at Utah State University, who was not involved with the research. “This kind of research is really helpful for us to feed people away from the planet Earth.

NASA selected five research projects last month to develop better plant-growing systems. One by Dr. Bugbee aims to use more sensors and controls to more precisely mete out water and nutrients. NASA will choose the two most promising prototypes, and researchers will then make more polished versions to be tested in space, Dr. Bugbee said.

Astronauts will also probably want to eat more than just lettuce. That adds other challenges. For tomatoes, for example, scientists will have to figure out how to recycle the rest of the plant that is not edible — the leaves, the stems and the roots.

Another challenge: There is no easy way to wash produce when floating in space. In 2015, the astronauts wiped the leaves with sanitizing wipes before eating them.

“NASA has underestimated the challenge,” Dr. Bugbee said. “Now they’re finally admitting, ‘Wow, this is harder than we thought.’ We’ve got to have more sophisticated systems.”