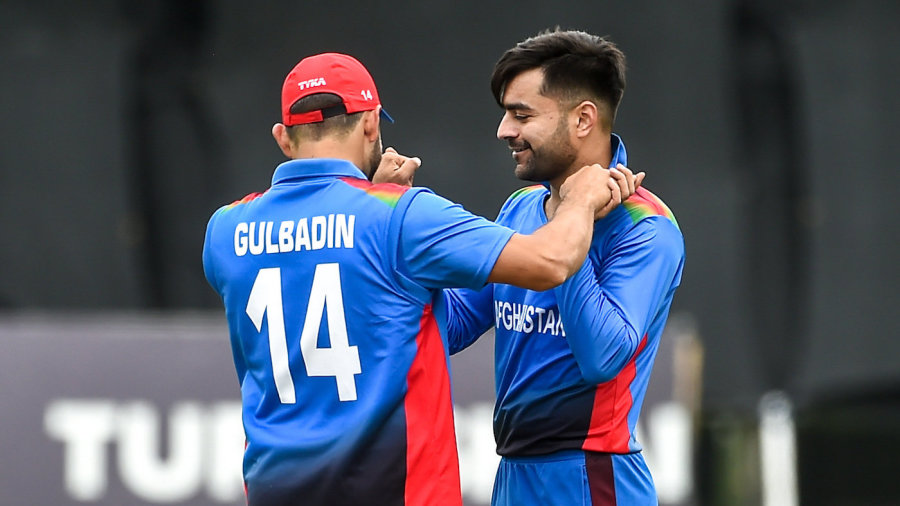 While three of Afghanistan’s bowlers conceded more than 9.75 per over, Rashid Khan‘s four-over spell of 3 for 22 ensured Ireland could post only 172 for 6 in their 20 overs. After that, brisk scoring from opener Rahmanullah Gurbaz and the No. 6 Najibullah Zadran, who both maintained strike rates of over 200, kept Afghanistan 11 runs ahead of the DLS par score when the rain arrived 15 overs into the chase, handing the hosts a 1-0 lead in the three-game series.

Ireland had won the toss, and on the back of a 63-run stand between Paul Stirling and Kevin O’Brien inside the powerplay, they got off to a flying start. But then Mujeeb Ur Rahman struck off the powerplay’s last delivery to remove O’Brien for 35. Stirling, however, continued his charge, hitting a half-century before being dismissed for a 41-ball 60. Khan, who dismissed Stirling via a caught and bowled, then dismissed Andy Balbirnie and Lorcan Tucker to keep Ireland’s run-scoring in check. Despite some late hitting from No. 5 Harry Tector, what Ireland could post was 22 runs fewer than the average first-innings score in the three T20Is that had been played at the ground previously.

Afghanistan openers Hazratullah Zazai and Gurbaz got a fifty stand by the fifth over of the chase, but the latter was soon trapped lbw by offspinner Simi Singh. Zazai was then bowled trying to cut Singh three balls later, and at the end of five overs, Afghanistan were 55 for 2. Karim Janat and Asghar Afghan were then both run-out in quick succession, which reduced Afghanistan to 70 for 4, but then Samiullah Shinwari and Najibullah put on 63-run partnership to drag Afghanistan out of trouble.

They batted under a steady drizzle, with one eye on the DLS par score – that they were always ahead of – but then Shinwari perished trying to slog Boyd Rankin in the 15th over. With 30 balls to go, Afghanistan needed 40 runs, but that’s when the rain got heavier. Najibullah did not wait for his new partner as the umpires asked both teams to exit the field, and 25 minutes later, they confirmed that no more play would be possible. The win was Afghanistan’s seventh-straight T20I win over Ireland in India.