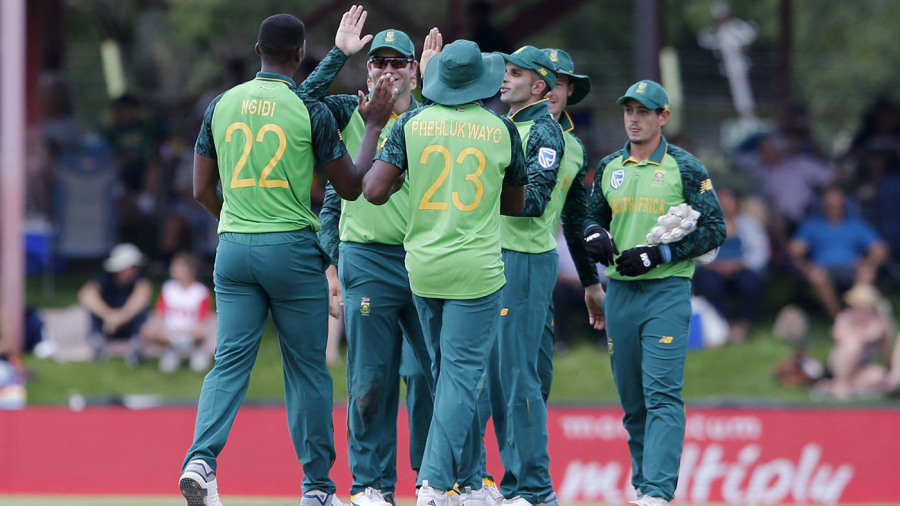 South Africa ended their year-long wait for a series win thanks to the efforts of Janneman Malan and co in Bloemfontein, removing some of the stress from the final fixture of the home summer. Quinton de Kock has overseen some fitful performances in the white-ball formats, but the continuation of South Africa’s dominant recent ODI record against Australia has provided a rallying point after the tumult of 2019-20.

With Malan and Heinrich Klaasen both scoring maiden hundreds, backed up by the promise of Kyle Verreynne and signs that Lungi Ngidi is rediscovering top form, South Africa can glimpse the outlines of a new-look one-day side ahead of next week’s trip to India that will round off their season. It may be that 50-over cricket is something of a development format right now, with greater emphasis on the back-to-back T20 World Cups in 2020 and 2021 – but then South Africa could do with developing their player pool after a slew of retirements over the last year or two.

Australia’s ODI plans may also be in need of some tinkering, with the Bloem result now making it four defeats in a row, and with largely a full-strength squad to pick from (barring the absence of Glenn Maxwell). D’Arcy Short made a career-best batting at No. 5 – for the first time in an Australia shirt – in the second match, but there is a sense of ponderousness around their middle order. For all the talk about how to pronounce Marnus Labuschagne’s surname, it may have gone unnoticed that Australia have lost on all four occasions in which he has spent time in the middle.

Priorities, as we’ve mentioned, lie elsewhere – as evidenced by the (completely understandable) decision to let Mitchell Starc leave the tour early in order to go and watch Alyssa Healy play in the T20 World Cup final. The absence of one final duel between de Kock and Starc – who had pegged back the South Africa captain’s middle stump three times in five innings – deprives the series finale of another edge. It has been a low-key tour, perhaps inevitably after the controversy of 2017-18, but the possibility of a 3-0 scoreline should be enough to keep both sides motivated to the end.

One day you’re cock of the walk, next you’re a feather duster – or the opposite, if you’re Janneman Malan, who has been in record-breaking form since his debut in Paarl, where he fell to the first ball of the match. He limped out of that game after hurting his leg in the field, but was fit and firing when it came to the second ODI, when his unbeaten hundred got South Africa over the line. He has since been announced as Leicestershire’s overseas signing for the English summer and – who knows? – there could still be greater accolades to come.

Mitchell Marsh came to South Africa having not played a limited-overs international since 2018, but won his chance after a strong Big Bash ahead of the likes of Marcus Stoinis, Peter Handcomb and Ashton Turner. However, innings of 19, 6, 19, 16 and 36 in five T20I and ODI outings, to go with a combined 1 for 89 with the ball, suggest he is nowhere near resolving his enigma status with Australia. Potchefstroom could therefore represent a final opportunity to maintain his involvement, ahead of the three-match ODI series against New Zealand starting next week.

Temba Bavuma has been given further time to recover from his hamstring injury, with Rassie van der Dussen joining the squad as cover. Tabraiz Shamsi is preparing to go on paternity leave imminently and de Kock has hinted at giving opportunities to those who haven’t played, which could see Lutho Sipamla and Beuran Hendricks come in.

With Starc heading home, Australia will have to bring in either Josh Hazlewood or Kane Richardson – possibly both, at the expense of Ashton Agar, given Short provides another option in the spin department.

Senwes Park has not hosted an ODI since 2013, and the pitch has a reputation for being batting friendly – although that was not on show during the U19 World Cup final last month, when Bangladesh scrapped to a dramatic win over India after being set a target of 178. This late in the season, the surface is unlikely to get much quicker. It’s set to be a hot day in Potchefstroom, a student town, which could lead to a lively atmosphere in the stands.

“From the last game, we were pretty good at everything. Maybe one or two small things, maybe in the field, we can be a little bit better at that. We’ve played pretty well these last two games. It’s a matter of maintaining the standards we’ve set.”
Quinton de Kock wants to finish the series in style

“I batted down the order for Western Australia when I started playing one-day cricket, so I’ve done it a little bit and enjoyed it. Looking forward to the opportunity to doing it for Australia and hopefully do it well.”
D’Arcy Short is happy with his new brief in the ODI side