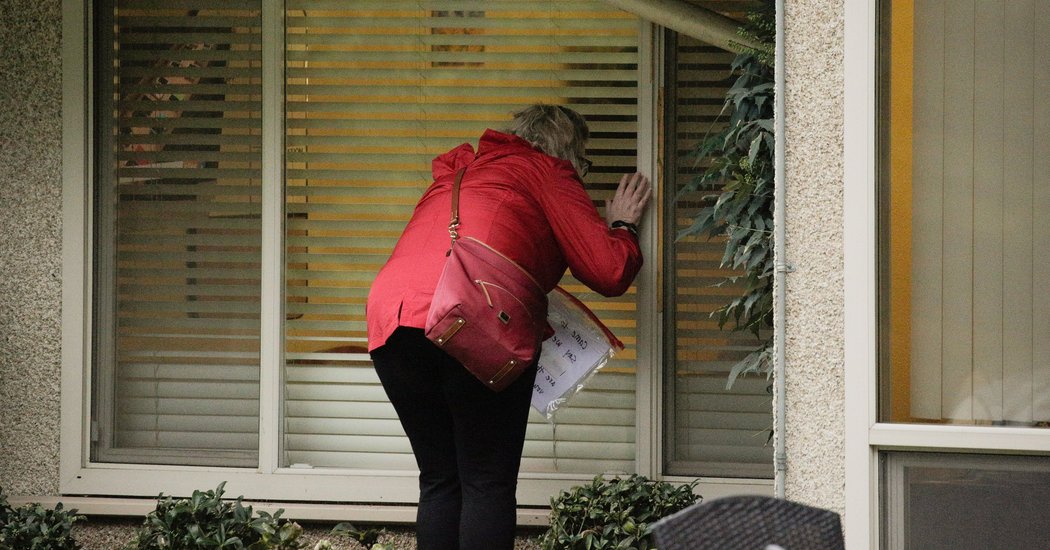 KIRKLAND, Wash. — The hardest day of Debbie de los Angeles’s life had been the day she put her mother into a nursing home. That was before coronavirus.

As fatal infections spread through the Life Care Center in suburban Seattle, where her 85-year-old mother lived, Ms. de los Angeles had tried not to worry. Nurses were monitoring her mother’s temperature. They reassured Ms. de los Angeles that her mother had no fever, cough or other signs of infection.

But at 4:15 a.m. on Tuesday, a nurse called with troubling news. Her mother, Twilla Morin, had developed a 104-degree fever. They were giving her Tylenol. Then the nurse confirmed her do-not-resuscitate orders.

“We anticipate that she, too, has the coronavirus,” a voicemail message from a nurse said. “We do not anticipate her fighting this.”

Moving into a nursing home can be a wrenching choice for aging parents and their adult children. But families said they never imagined facing a public health crisis in the quiet hallways where they once believed their loved ones would be safe.

In the week since the Kirkland nursing facility became the focal point of an unfolding coronavirus outbreak in the Pacific Northwest, daily life has stalled into a sleepless, slow-motion agony. With visits restricted, families now call and call for updates from the overworked nursing staff. The families wonder whether they should demand a visit, risking their own health and wider contamination. Some want their parents moved to the hospital or to a different facility but have no idea who else would care for fragile patients potentially exposed to a deadly disease.

“I just feel ill that my mom could be dying alone,” said Vanessa Phelps, whose 90-year-old mother has chronic breathing problems and has lived at the facility for four years. “It’s pure panic and I can do nothing. I have no control.”

Some families now call twice a day to ask how their octogenarian parents are feeling and reassure them about the alarming television news transmitted into their rooms, much of it featuring the crisis right there inside the center. Some video chat on tablet computers designed for older users. One woman stood outside her mother’s window to catch a glimpse between the slats.

It has been like seeing a ship sink without lifeboats. “We are watching from the shore and not being able to do anything,” said Alex Stewart, whose 95-year-old grandmother lives in the nursing center and has been crocheting a small blanket in anticipation of Ms. Stewart’s baby — her first great-grandchild. “It is a very helpless feeling.”

Nobody knows for sure how the coronavirus first entered the facility, which has become a grim warning of how the virus can spread particularly quickly inside nursing homes. At least eight of the 14 coronavirus deaths in the United States have been Life Care residents, and at least a half dozen other people connected to the facility have been sickened by the virus.

Even amid intense scrutiny of the nursing center and its record of handling infections, families said they were struggling to get basic information from Life Care’s leaders and public health officials. They said they had spent untold hours on the phone, being shunted between county and state government offices and the Centers for Disease Control and Prevention.

One man said he called a federal hotline and introduced himself as the son of an octogenarian Life Care resident. The response, he said, was concerning: He was asked whether there had been any coronavirus cases in his area.

Many residents inside the 190-bed facility went days without being tested for coronavirus, families said, even as they and their roommates started coughing and feeling feverish. Families worry that the true number of infections may be higher than official totals.

Experts in infectious diseases say older people, many of whom have underlying health problems and respiratory problems, are particularly vulnerable to the virus and have a higher risk of death.

“People keep saying, ‘Why don’t you just go and bust them out?’” said Kevin Connolly, whose 81-year-old father-in-law, Jerry Wall, has been at the home for about a year recovering from heart failure.

“It’s his home,” Mr. Connolly said. “He likes the food, he likes the care, he has friends there.”

At a news conference on Wednesday, Dr. Jeff Duchin, the officer for public health in Seattle and King County, said teams were now working to test every Life Care resident for the virus, and apologized for a breakdown in communication. A federal disaster medical assistance team was expected to arrive at the center on Thursday.

Ellie Basham, the executive director of Life Care, said in a statement that it was assigning every resident a representative who could answer questions from family members.

Families welcomed the promised help, and praised the nurses and caregivers who showed up to work even as the virus spread and as several employees tested positive. It appeared that the virus tests were underway on Thursday; one relative reported that her father had been swabbed.

On Wednesday night, Ms. Stewart said her grandmother had begun to feel chills and short of breath.

Day by day, desperation has grown for families of sicker, weaker residents.

Bridget Parkhill’s 77-year-old mother had been ill for nearly a week inside the home. On Wednesday, she was taken to the hospital after her coughing worsened and she felt a heaviness in her chest. “We are devastated that it’s come to this,” Ms. Parkhill said. Her mother returned to the home on Thursday.

Ms. de los Angeles, 65, said that her mother, Ms. Morin, had never wanted to move into a nursing home.

Ms. Morin had been a numbers whiz, once halting an embezzlement scheme while working as a bookkeeper. She had also learned to day trade stocks and would get up early for the market open on Wall Street, three time zones ahead of her home in Kennewick, in southeastern Washington State.

Ms. Morin moved into her first nursing home about four years ago after she could no longer stand or walk by herself. As her dementia deepened, Ms. Morin sometimes confused Ms. de los Angeles, her only child, for her sister.

Her world at the Life Care Center, where she had lived for two years, had narrowed to her shared room, the wheelchair she rolled to the dining room and the table where she often ate by herself. She loved a cup of hot chocolate at night and cared for a doll as if it were a real child. In lucid moments, she knew she was proud of her grandsons, Ms. de los Angeles said.

Ms. de los Angeles wanted to race to the nursing facility this week when she heard that her mother’s condition was deteriorating. But she knew the risks of infecting her husband, who has lung problems, were too great.

She got regular updates from the nurses caring for her mother, and was comforted that mother’s favorite nurse was on duty, and that her mother appeared to be mostly sleeping. And yet.

Early on Wednesday morning, Ms. de los Angeles woke to a new voicemail message from Life Care. Her mother had died at 2:10 a.m., the message said. Because of the “unique situation” at the home, her mother’s remains had to be picked up by the coroner, a nurse said.

By late morning, Ms. de los Angeles and her husband, Bob, were sitting on living-room couches at their home in Monroe, Wash., surrounded by their four grown sons, looking at old photos and sharing memories of Ms. Morin.

They had to arrange her cremation and decide whether it was safe to pick up her ring, stuffed teddy bear and other belongings. They were waiting for test results to determine whether Ms. Morin had contracted the coronavirus. It had been a month since the family’s last visit, so they were not worried about being infected themselves. Ms. de los Angeles said she simply needed to know.

“I still question what’s going on in that nursing home,” Ms. de los Angeles said. “They gown up. They wear masks. But the virus is still making its way around.”