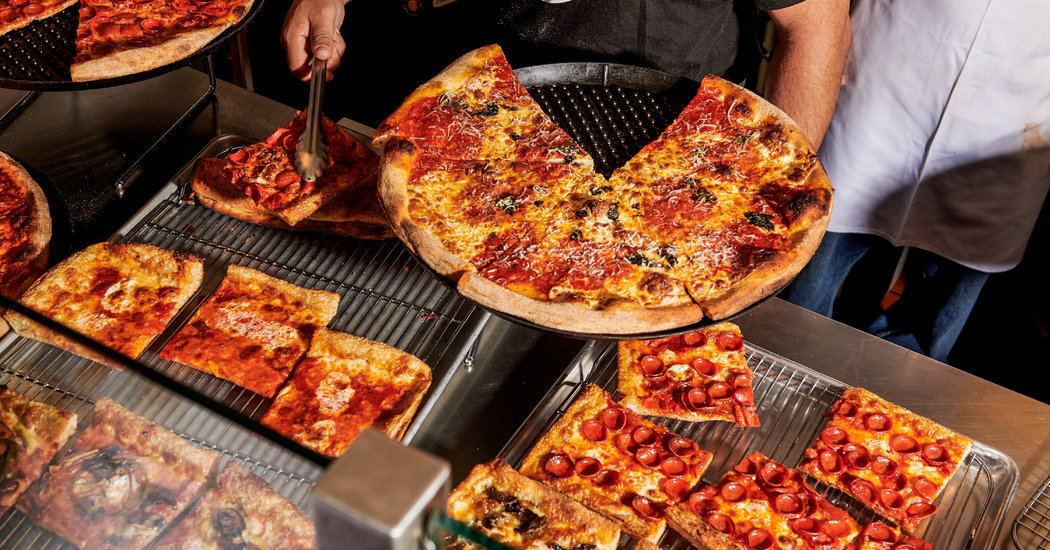 In a city with the Eiffel Tower, the Space Needle and an Egyptian pyramid all along the LED screen-lined Las Vegas Strip, it should be no surprise that seemingly every regional variety of pizza is available.

But what may surprise is the level of craft brought to pizza in Las Vegas. These pies aren’t from frozen balls of dough or assembly-line creations. They are the creations of people passionate about their craft who have also formed a tight-knit community where the pizzamakers share recipes and support each other.

“In order for us to make better pizza than there was 10 years ago, or a week ago, or yesterday, we have to be committed to helping each other in our community and our industry,” says the owner and pizzamaker at Good Pie, Vincent Rotolo, who relocated to Las Vegas from Brooklyn in 2011. “When that happens, that’s where the magic is.”

These days, Las Vegas has a thriving pizza scene, an open community of pizzaiolos (or pizzamakers) dedicated to expanding the profile of Sin City’s pizza scene, and embracing the influence of outsiders who are bringing hometown ideas to a city without a style of its own.

Mr. Rotolo and John Arena — who is something of the city’s pizza godfather, having moved to Vegas from Brooklyn in 1980 to buy a pizza shop — are two of the founders of the two-year-old Las Vegas Pizza Alliance. On any given day, they can be found with other local pizzamakers, bouncing around ideas and recipe tweaks.

The Alliance threw the city’s first Pizza Festival on Nov. 16, drawing a near-sellout crowd to an event space just off the Strip where, under a cloudless sky, locals and visitors alike got both a taste of the city’s many artisan pizzas, and takeout boxes filled with enough pizza to last for days.

Mr. Arena routinely travels to pizzerias, and also responds to questions from pizzaiolos from around the world, including Brazil and China. He’s even taught a class on the dish at the University of Nevada Las Vegas. In one instance, Flour & Barley, a restaurant on the Strip, asked Mr. Rotolo to consult on its gluten-free pies, one of Mr. Rotolo’s specialties. The restaurant ended up taking first place in the category at the 2017 USA Caputo Cup, a pizza competition at the Pizza & Pasta Northeast, in Atlantic City, N.J.

That sharing of what used to be secretive makes sense considering the varied background of local pizzeria owners. Some, like Mr. Arena, come from pizza-making families, while others, like the Buffalo-raised Chris Palmeri of Naked City Pizza, came to Vegas originally as a fine dining chef, but found the corporate world of the Strip casinos off-putting.

It all adds up to a city that has a pizza style for seemingly every taste. Unlike the signature facsimiles of Vegas, including the faux Statue of Liberty at New York-New York Hotel and Casino, these pies are authentic takes, sometimes prepared by a city’s expats, other times by students of pizza history.

There are acclaimed — and in some cases, award-winning — versions of the square, sauce-on-cheese grandma, the thick-and-chewy-crusted Detroit and gluten-free pizzas at Good Pie; the cheese-heavy, Buffalo-style pizza, complete with cup-and-char pepperoni, at Naked City Pizza; square and circular pan pizza at Mr. Arena’s Metro Pizza and Chicago deep-dish pies at Amore Taste of Chicago.

The dish is showing up on menus at non-pizzerias, too: James Trees, who once worked with the award-winning chef Michael Mina at Aqua Las Vegas (among other restaurants), has added his own sourdough pizza menu to his Arts District Italian eatery, Esther’s Kitchen.

That eclecticism spreads to the dining experiences, as well. Metro Pizza, which has five locations in Las Vegas and the surrounding area, has a welcoming, all-ages feel at its largest restaurant in the city’s Centennial Hills neighborhood, with deep, padded booths and a painted map of “America’s Family of Pizzerias” on the wall.

To pay tribute to the grandma pie and the nonnas who made and make it, Mr. Rotolo has arranged a wall of photos of grandmothers — his and others (including the mid-90s “Grandmama” character that Larry Johnson, the former forward at the University of Nevada Las Vegas and pro basketball star, made famous in popular Converse commercials. That wall will expand, Mr. Rotolo says, as Good Pie plans its move this spring to the Las Vegas Arts District, alongside the up-and-coming neighborhood’s new bars, galleries and restaurants.

There are more traditional Vegas experiences, too: The Cosmopolitan hotel’s slice counter, hidden at the end of an unmarked, record-lined hallway on the hotel’s third floor, is known as “Secret Pizza,” and seems busiest as the hotel’s nightclub winds down, and Evel Pie, where Mr. Rotolo was once the head pizzaiolo, has a punk-rock-meets-Evel-Knievel aesthetic, replete with a Knievel-themed pinball machine, ’70s-era bunting and music, and the words “Live Hard, Ride Fast, Eat Pizza” in lights above the bar.

“If I’m in New York, I’m opening a New York-style pizza place. If I’m in Chicago, I’m going to do deep-dish Chicago,” says Mr. Rotolo. “But being in Vegas, you can choose to create the style of pizza which you’re most deeply connected to, because it brings you back to that nostalgic place of whatever home represents to you.”

52 PLACES AND MUCH, MUCH MORE Discover the best places to go in 2020, and find more Travel coverage by following us on Twitter and Facebook. And sign up for our Travel Dispatch newsletter: Each week you’ll receive tips on traveling smarter, stories on hot destinations and access to photos from all over the world.