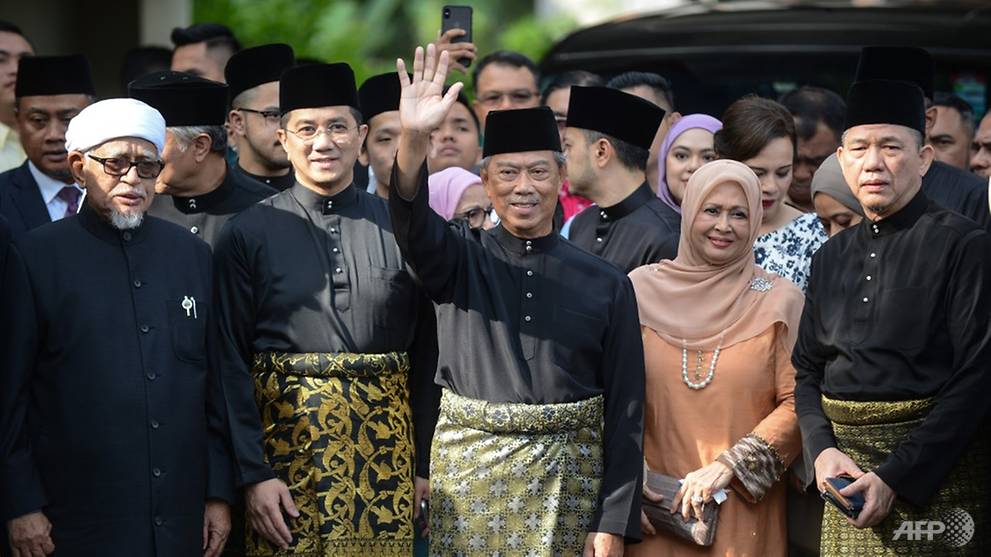 KUALA LUMPUR: Malaysian Prime Minister Muhyiddin Yassin has been in office for less than a week, but the 72-year-old already has a lengthy to-do list.

Having been sworn in after the uncertainty of Dr Mahathir Mohamad’s resignation and the collapse of Pakatan Harapan (PH), Mr Muhyiddin’s urgent priority is to steady the ship and steer Malaysia back on track.

Among the issues he has to confront is how to strike a balance among various parties’ interests in his Cabinet line-up.

The leadership change also reconfigured the political alignments in parliament. Now, both the Perikatan Nasional and the Pakatan Harapan (PH) coalitions claim that they have a simple majority out of the 222 lawmakers.

Mr Muhyiddin was appointed by the king last Saturday (Feb 29). A palace statement said the king has found that Mr Muhyiddin likely commanded the support of the majority of members of parliament (MPs).

However, PH is insisting that Dr Mahathir still commands the support of 112 MPs.

Furthermore, Mr Muhyiddin’s task has been made more difficult by the ongoing COVID-19 outbreak, as Malaysia has been hit with a second wave of infections this week involving a cluster in Kuala Lumpur.

In his first national address as prime minister on Monday, Mr Muhyiddin said he was aware that Malaysians wanted a government that is clean, has integrity and is free of corruption.

“To begin with, I promise to appoint Cabinet members from among individuals who are clean, have integrity and have the right calibre,” he had said.

READ: Malaysian PM Muhyiddin says he stepped forward to ‘save the situation’, denies allegations of being traitor

All eyes are on who will be named in the key posts – especially the deputy premier, as well as the finance, home affairs and economic portfolios.

The parties in the ruling coalition include the United Malays National Organisation (UMNO) with 39 MPs, Parti Islam Se-Malaysia (PAS) with 18 MPs and around 30 MPs from Parti Pribumi Bersatu Malaysia (Bersatu).

The Malaysian Chinese Association (MCA) has two MPs while the Malaysian Indian Congress (MIC) has one. Gabungan Parti Sarawak (GPS), with 18 MPs, is an ally to Perikatan Nasional but not officially part of the coalition.

Publicly, the parties in the coalition have pledged to give Mr Muhyiddin time and space to make his decision.

Responding to CNA’s queries, PAS President Abdul Hadi Awang said that he has left the decision to Mr Muhyiddin “as it is his prerogative as prime minister” to name his Cabinet “without conditions or requests”.

Mr Hadi added that he has also suggested to the prime minister to include a group of professionals, who are non-politicians, to be part of the government.

“We will give the prime minister the space to name his Cabinet. With god’s will, it will strengthen ties between BN, PAS, GPS and Bersatu behind the country’s leadership,” he said.

However, political analyst Associate Professor Ahmad Martadha Mohamed from Universiti Utara Malaysia posited that behind the scenes, UMNO could have exerted “mild pressure” on Mr Muhyiddin to ensure that their members are appointed to key ministerial positions.

UMNO’s president Ahmad Zahid Hamidi said on Monday that he could not attend a hearing in his graft trial as he was meeting Mr Muhyiddin to discuss the new Cabinet.

Mr Zahid was later warned for his absence when he was unable to produce a letter from the prime minister’s office confirming this.

Assoc Prof Ahmad Martadha said: “Muhyiddin is going to have a very, very difficult task. He has to follow through with whatever he promised, to select ministers who are free from corruption and are clean with high integrity.”

“But when they heard the prime minister’s address, there were some rumblings among UMNO leaders … Some key UMNO leaders have been charged but they want to make clear that they are innocent until proven guilty by the courts,” he noted.

Meanwhile, MCA vice-president Ti Lian Ker said the party is keeping an open mind on the issue of Cabinet positions.

“It is up to the wisdom of the prime minister,” he said.

Mr Ti, who is also a senator, said MCA hoped Mr Muhyiddin would recognise the fact that Malaysia has a big percentage of non-Malays and their voices need to be heard.

“While we do not want to play up differences, the political reality is there are racial and religious gaps. We need political leaders to empathise with the needs of the communities – MIC with the Indians, and MCA with the Chinese,” he said.

“Given the complexity of how he has come to power, the criteria, the implications of his choice will affect everything. So the Cabinet he chooses must not only be stable but positive and driven. Stability is, of course, the keyword here.

“He needs to work on getting the best people based on merit and not forgetting ethnic backgrounds,” said Dr Jeniri

“Now it (the ruling coalition) is very Malay-centric … He needs to set up (the Cabinet) to bring Indians, Chinese, and non-Muslims from Sabah and Sarawak.”

A corollary issue is the combined influence of UMNO and PAS within the ruling coalition, versus Bersatu’s smaller size.

Dr Wong Chin Huat, a political scientist from Sunway University said that Mr Muhyiddin has already “started on the wrong foot” as Bersatu is not the largest party in the Perikatan Nasional coalition, and hence he has limited control.

“As of now, Muhyiddin does not have any prospects to continue as prime minister after General Election 15. Even if his Perikatan Nasional coalition wins, Bersatu will not emerge as the largest party,” said Dr Wong.

“Like how UMNO has grabbed top posts from Bersatu at the state level, Muhyiddin is but a seat warmer in the eyes of UMNO and PAS.”

Dr Jeniri said the prime minister has no choice but to please UMNO and PAS.

“That’s the bottom line now. Mr Muhyiddin has to please them. Being the smallest in Perikatan Nasional, he has to give in to their demands and it’s not easy at all,” he said.

Assoc Prof Ahmad Matadha also pointed out that UMNO, in particular, feels that it has the right to have its members hold key positions because it has the most number of MPs in the ruling coalition.

“In fact, if the prime minister is not careful, UMNO could be pushing for fresh general elections. They feel that together with PAS, they would be confident to win it without the help of Bersatu,” said Assoc Prof Ahmad Martadha.

The prospect of a general election could spell bad news for Bersatu. Democratic Action Party (DAP) member and former deputy defence minister Liew Chin Tong said that Bersatu would be “eaten up alive” by the two other parties.

“I worry if the UMNO and PAS coalition, which dominates Mr Muhyiddin’s fledgling Bersatu, ever have the intention to call for elections. They may even ban elections if they think they cannot win power through democracy,” he claimed.

Who would fill the deputy prime minister position?

He noted that if My Muhyiddin picks Mr Azmin, this could trigger some hostility among some of the UMNO leaders.

“UMNO is the party with the majority number of seats so they want the DPM post given to them, so this is a thorny issue that the prime minister has to resolve,” said Assoc Prof Ahmad Martadha.

He added that offering the position to GPS could be a compromise, as it had sided with Mr Muhyiddin as the kingmaker during the height of the political crisis.

QUEST FOR A BIGGER MAJORITY IN PARLIAMENT

An issue that must be addressed before the next parliamentary sitting is the size of the majority support Mr Muhyiddin could muster in the House.

Out of 222 seats in the House, he must have the backing of at least 112 to form a government.

Analysts have pointed out that Mr Muhyiddin should even aim to have around 125 MPs behind him to form a stable government that would be able to pass Bills and govern sustainably.

In a statement, DAP advisor and senior PH politician Lim Kit Siang has called for Mr Muhyiddin to convene an emergency parliament sitting to prove that he indeed has the support of the majority of parliamentarians.

A parliamentary meeting was previously scheduled for Mar 9, but the speaker has announced that it will be postponed until May 18.

“This has been interpreted as “a sign of weakness” that the Prime Minister, Mr Muhyiddin Yassin does not have the majority support of MPs to be a legitimate Prime Minister of Malaysia,” Mr Lim claimed.

READ: Explainer – What are the possible scenarios of a no-confidence motion in Malaysian parliament?

However, according to Assoc Prof Ahmad Martadha, what Mr Muhyiddin has on his side is the power to decide on policies, allocation for development and the appointment of Cabinet ministers,

This could be useful in persuading some MPs in the PH coalition to crossover before parliament convenes in May,

“Mr Muhyiddin has the power to call the shots, so he can put a lot of things on the bargaining table.”

He also expects Mr Muhyiddin to try to persuade PH ally Parti Warisan Sabah to crossover to support him and Perikatan Nasional. Warisan has nine MPs and the numbers would be key in helping Mr Muhyiddin secure a comfortable margin.

Beyond the issue of political stability, those interviewed said that the prime minister also needs to show strong leadership on the COVID-19 issue.

Mr Muhyiddin has tasked the civil service to implement the stimulus package previously announced by Dr Mahathir. But there is a lot more to be done.

When it looked like the worst may have been over for the spread of COVID-19 in Malaysia, the country has been hit with a new cluster in the capital Kuala Lumpur, causing at least 19 new cases originating from one man.

The man, 52, has been identified as a director of UDA Holdings, which is a government-linked company, and a senior member in the leadership of sovereign wealth fund Khazanah Nasional.

The spread has come at a bad time for Mr Muhyiddin, as he has yet to pick a health minister to spearhead the government’s efforts in combating the virus.

The previous health minister from the PH coalition, Dr Dzulkefly Ahmad, earned praise from observers for his leadership in Malaysia’s fight against COVID-19.

Dr Dzulkefly is a toxicology expert and was able to utilise his knowledge to explain to the public regarding COVID-19.

Even Mr Annuar of UMNO has reserved praise for Dr Dzulkefly. In a tweet on Thursday, Mr Annuar wrote: “I feel that it’s not wrong if Dr Dzulkefly, as a representative for the people, be given the opportunity to be part of Malaysia’s team to manage the spread of COVID-19.

“The interest of the general public has to be prioritised over party politics. Personally, I would recommend that Dr Dzukefly continue to help the government.”

However, Prof Ahmad Martadha said that the appointment is likely to come from Perikatan Nasional, and the onus is now on Mr Muhyiddin to appoint someone with similar credentials with a proper medical background.

“Tan Sri Muhyiddin cannot afford to fight COVID-19 alone, he has to name someone as minister for health, and this person must have a strong medical background,” said Assoc Prof Ahmad Martadha.

MCA secretary-general Chong Sin Woon told CNA that the party has strong confidence that the prime minister will be able to find his footing to rise above politics and focus on issues that matter to Malaysians, such as the economy and national harmony.

“The country can benefit from a figure who will be able to rise to the occasion. For a while, real issues haven’t been looked into as the political front slipped into a condition that was not conducive for Malaysia’s development,” he said.

Additional reporting by Tho Xin Yi.