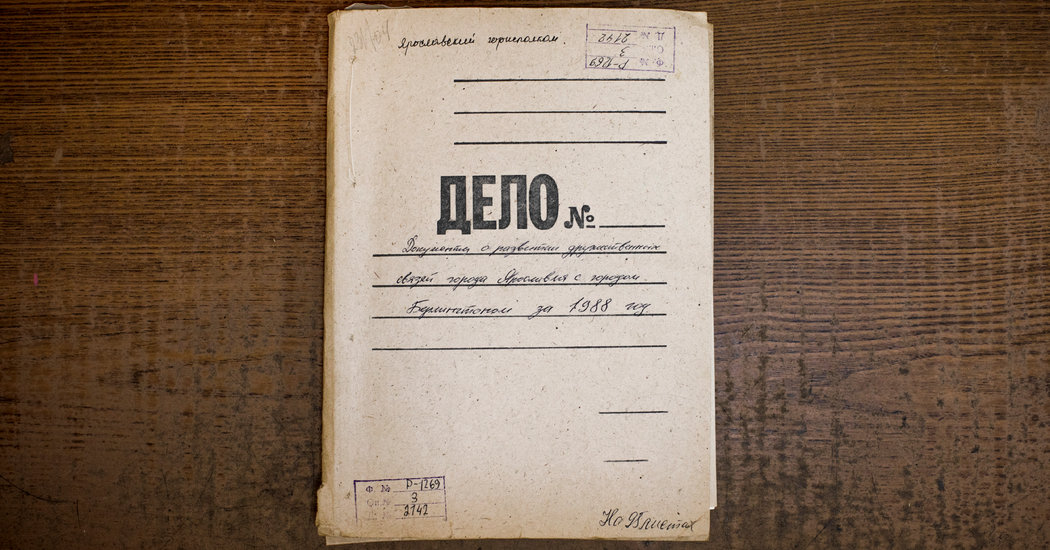 The New York Times reviewed 89 pages of letters, telegrams and internal Soviet government documents revealing in new detail the extent of Bernie Sanders’s effort in the late 1980s to establish sister-city ties between Burlington, Vt., and a city in the Soviet Union.

The documents are part of a government archive in Yaroslavl, Russia, which became Burlington’s sister city when Mr. Sanders was mayor. The files are open to the public, though archivists said that, until now, no one had asked to see them.

Here are five excerpts from the archive.

Checking In at the Yubileynaya

This check-in slip to the Yubileynaya Hotel on the Yaroslavl waterfront shows that two newlyweds from Burlington — Bernie and Jane Sanders — stayed in Room 415 from June 7 to 10, 1988. “USA” is scrawled at the top of the slip.

‘Live Together as Friends’

“There are no rational reasons why the United States and Soviet Union cannot live together as friends. Our sister city relationship can perhaps play a part in bringing the two countries closer together.”

After his visit to Yaroslavl in June 1988, Mr. Sanders continued to push for Soviet officials to approve a sister-city partnership with Burlington. When Yaroslavl went forward with plans for a partnership the following month, Mr. Sanders was exuberant in a letter to his counterpart.

“I believe that sister city programs like the Yaroslavl Burlington one will help improve Soviet American relations and develop a more peaceful world.”

Yaroslavl officials still needed Moscow’s approval to accept an invitation to visit Burlington, and Mr. Sanders lobbied on their behalf.

Mr. Sanders sent a Telex to the cosmonaut Valentina Tereshkova, the first woman in space, who then headed the Union of Soviet Societies for Friendship and Cultural Contacts. The agency oversaw sister-city contacts in the Soviet Union.

The trip was ultimately approved, and the Yaroslavl delegation went to Burlington a few months later, in October 1988.

“At a meeting in the municipality of Burlington on October 8, 1988, Comrade A. I. Ryabkov, chairman of the Yaroslavl City Executive Committee and deputy of the City Soviet, will talk about the peace-loving policies of the U.S.S.R. and the perestroika happening in our country in all spheres of life.”

The Yaroslavl City Executive Committee — the city’s governing body — submitted a seven-point “Plan for Information-Propaganda Work” to Moscow officials in order to get approval for the Burlington trip.

“One of the most useful channels, in practice, for actively carrying out information-propaganda efforts has proved to be sister-city contact. Deepening and activating relationships between Soviet and foreign cities solidifies agreements on the governmental level and furthers understanding and cooperation between peoples.”

A nine-page manual from the Soviet Foreign Ministry offers instructions on how to propagate the country’s message to foreigners.

Sister-city contacts can be fruitful targets for propaganda, the document says, along with people involved in antiwar movements and cultural figures.