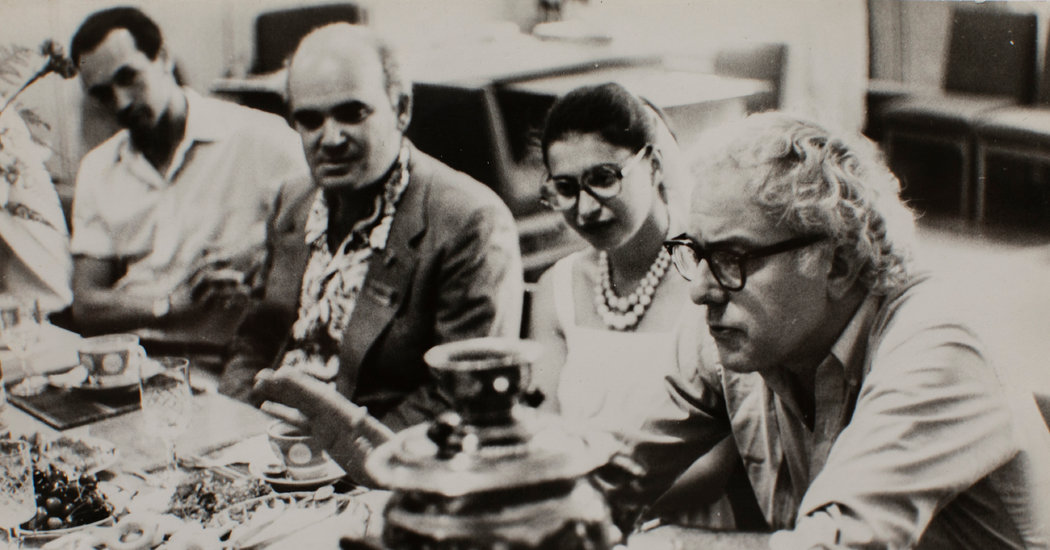 As Bernie Sanders became one of the front-runners in the presidential race, journalists in the Moscow bureau of The New York Times began thinking about the days he spent in the Soviet Union in 1988, when he was the mayor of Burlington, Vt.

His visit to a Russian sauna with Soviet officials, singing “This Land Is Your Land,” had already been well told. And residents of Yaroslavl, the city a few hours northeast of Moscow where Mr. Sanders had traveled, had already gone public in 2016 with their positive views of him.

But was there more?

No Russians or government officials encouraged us to look into Mr. Sanders. Driven by our own curiosity, I hopped on a train last week to Yaroslavl as Oleg Matsnev, a researcher in our bureau, checked to see what I might find.

There was a wealth of documents in Yaroslavl, he said, and while it might take time to get access, “I think it is worth it.”

The next morning, a Thursday, I stopped by the Recent History Documentation Center of the Yaroslavl regional government, where, surprisingly, it took only about an hour to get some files. They were string-and-cardboard-bound packets with titles like: “Documents on the development of foreign relations, creation of separate friendship societies, delegation exchanges, etc. (plans, protocols, charters, reports).”

There were a few letters from Mr. Sanders, translated into Russian, that were sent after his trip. But otherwise, not much. The local paper, The Northern Worker, did not seem to mention Burlington or Mr. Sanders in 1988, as best as I could tell in flipping through the year’s issues.

The archive worker, strict but helpful, suggested I try the city’s main government archive on Soviet Street. We had identified one file that seemed promising: “Reports on the work of the city executive committee on developing friendly ties with sister cities for the year 1988.”

The archivists on Soviet Street told me I’d need to come back the next day to view the file.

On Friday, as I looked through the file, I found details on ties with cities in France, Portugal and West Germany. But in the stack of yellowing paper there was only one entry mentioning a visit by a delegation from Burlington.

I figured there must be more. I asked for the full index of the archive’s files relating to the Yaroslavl City Soviet — the Soviet-era governing body — for 1988. As I went through the lines of typewritten entries, one jumped out: R-1269, Op. 3-2, D. 2142.

The title? “Documents about the development of friendly relations of the city of Yaroslavl with the city of Burlington in 1988.”

The earliest I could see it, the archive worker said, would be Tuesday, but no guarantees. Private information would need to be redacted. I took the train back to Moscow, getting ready to do it all again on Tuesday.

When I went back on Tuesday, one of the archivists presented me with the file — cream-colored, bound with string and titled in neat cursive. The ledger on the inside front cover showed no one had ever checked it out. Six pages were covered with white pieces of paper to block out personal information.

But the rest presented an unexplored trove of material: Telex messages from Mr. Sanders, his letters in the original English and in Russian translation, and pages upon pages reflecting the Soviets’ careful preparation for his visit.

Its 89 pages show the extent of Mr. Sanders’s effort to establish ties between his city and a country seen by many Americans then as an adversary, and the Soviets’ intense preparation to propagate their message. They also show how the Kremlin viewed sister-city relationships as vehicles to sway American public opinion.

There was also the hotel check-in slip for Mr. Sanders and his wife, Jane: Room 415 of the Yubileynaya Hotel on the waterfront. Out of curiosity, our photographer Emile Ducke and I stopped by.

The manager, Nikolai Galimski, offered to show us the room — in the 1980s, the nicest suite in the town’s swankiest hotel.

The Italian-made sofa and armchairs are still there. The Soviet-made wired radio, with only one station, still works.

As we entered the bedroom, Mr. Galimski said, “Your future president slept in this bed.”