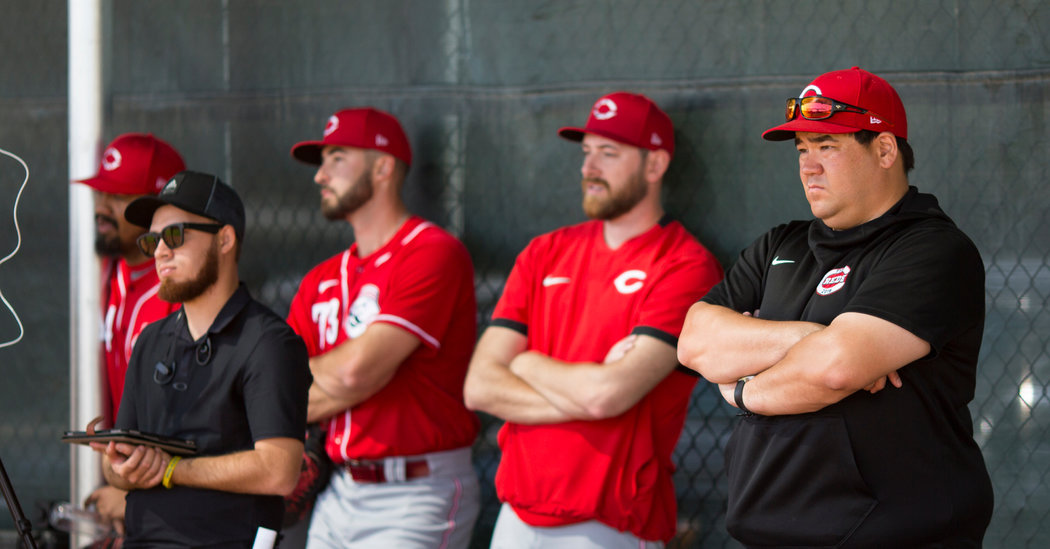 GOODYEAR, Ariz. — The path to the majors starts in obscurity, on the back fields at spring training, where the prospects wear T-shirts with numbers but no names, and the music plays only for the people on the field. No fans watched a recent minor-league practice at the Cincinnati Reds’ complex. Few of the players will ever spend a day in the majors.

But there is always a chance to stand out, to beat the odds and prove you have something valuable to offer. That is how it worked, anyway, for Kyle Boddy, the roundish guy in the black pullover who was leading the drills.

Boddy, the founder and president of the renegade Driveline Baseball training center in Kent, Wash., has gone mainstream. Last fall the Reds hired him for a new position called director of pitching initiatives and pitching coordinator. Several other teams had also recruited Boddy, an outsider whose scientific approach once clashed with baseball’s stodgy establishment.

“I truly didn’t think it was going to happen for another five or 10 years,” said Boddy, who had only consulted for teams before. “But it just made too much sense for it to fail.”

Boddy, 37, worked as a software developer for Microsoft but could not shake his passion for pitching, specifically the secrets of arm health and the potential to be found through data and analysis. He started Driveline in 2008 at an industrial park near Sea-Tac Airport, growing it into a high-tech laboratory for building velocity and designing pitches while attracting both college hopefuls and accomplished major leaguers.

Schools like Vanderbilt, Oregon State and Coastal Carolina have used Driveline’s methods on their way to championships. Trevor Bauer, a starting pitcher for the Reds, was the first major leaguer to train at the center, and many more have followed; the Los Angeles Dodgers stars Clayton Kershaw and Kenley Jansen visited this off-season.

“Driveline gets to work with athletes for a week at a time or, at most, an off-season of three months,” Bauer said. “What can you get done with four times that amount of time?”

The Reds, who have staggered through six consecutive losing seasons since their last playoff appearance in 2013, were eager to find out. Before last season, they hired a new pitching coach, Derek Johnson, persuading him to leave the Milwaukee Brewers by chartering a jet to meet him for dinner in Nashville, where he had helped build Vanderbilt into a factory of amateur pitching talent.

Last season, while the National League’s collective earned run average swelled by 36 points, to 4.38, the Reds’ E.R.A. dropped by 45, to 4.18. The Reds also led the N.L. in strikeouts, and only the Dodgers allowed fewer hits. Starters Luis Castillo and Sonny Gray were All-Stars, and Bauer — an All-Star for Cleveland in 2018 — arrived in a July trade.

Johnson’s top assistant, the former Reds and Yankees reliever Caleb Cotham, pitched for him at Vanderbilt and trained with Boddy at Driveline. As a staff, the Reds believe they can connect with pitchers raised with better access to more information than any generation before.

“You have to know what you’re talking about, and you have to know that they’re probably going to try to find out more about what you’re saying,” Johnson said. “So you’ve got to pull them towards the proper information, and also make sure we remember how to compete. It’s not always a cut-and-dried scenario like so often technology seems to be.”

At Driveline, Boddy and his staff helped pioneer the use of high-speed cameras to measure release point, spin rate, pitch trajectory and so on. Those devices have become all but standard instructional tools around the majors, most notably with the Houston Astros, whose sign-stealing scandal should not obscure the value of their innovations.

For all of Driveline’s influence, Bauer said, the Astros’ success is the biggest reason teams now crave the kind of style Boddy encourages.

About 30 Driveline staff members have been hired by major league teams, so getting the founder was a coup for Dick Williams, the Reds’ president of baseball operations. Williams said he was skeptical of Boddy because he is so outspoken, but Boddy surprised him by emphasizing the importance of cohesion within a coaching staff, at all levels.

“What we no longer want is, in the middle of the season, a guy goes to A-ball and tries something new, then he gets promoted to Double-A and the coach wants to try something else,” Williams said. “You’ve got to stay true to your core philosophies and give them time to work.”

To that end, the Reds will film every bullpen session for pitchers in their farm system. Coaches and pitchers can still have private conversations, without cameras, but their bullpen work will be shared throughout the organization, creating a feedback loop.

“My thing is like: ‘This is a good bullpen, this is a bad bullpen — here’s what I tried when I couldn’t get through to the kid, and here’s when our relationship turned around; here’s how he likes to be talked to,’” Boddy said. “You can tell someone that, but if you see it, it’s such a different thing.”

Communication is essential to a coach, of course, and three teams that hired analytically minded major league pitching coaches before last season — the Los Angeles Angels, the Philadelphia Phillies and the Seattle Mariners — fired or reassigned them by the first week of October.

Johnson’s success with the Reds emboldened them to expand on his methods by hiring Boddy, who will interpret their data, fact-check unexpected findings and help develop more accurate algorithms.

And perhaps even jettison the pullover in favor of a proper uniform.

“At some point, I’m going to go to his locker and steal all his clothes and just leave his jersey,” Bauer said. “He’s gone baseball pants now, I like that, but he’s got to go full uni at some point.”

Boddy’s contract allows him to work with non-Reds players in the off-season, but his main emphasis will be bolstering a farm system that Baseball America ranked 28th of the 30 teams.

To that end, Boddy said, he will work most closely with the Reds’ youngest prospects, in the Arizona Rookie League and the Dominican Summer League. In time, the Reds believe, an instructor known for precision could give them an edge they cannot quantify.

“You try to put an honest estimation on it, a monetary value — ‘OK, if we improve these guys in these ways, it could produce this kind of surplus value for the organization’ — and the numbers you get are so absurd you can’t even present them in a reasonable pitch to someone,” Bauer said.

“It’s going to take a couple of years to get the systems and the people in place, and to have enough time with the athletes to make sizable changes. But the possibilities are crazy.”