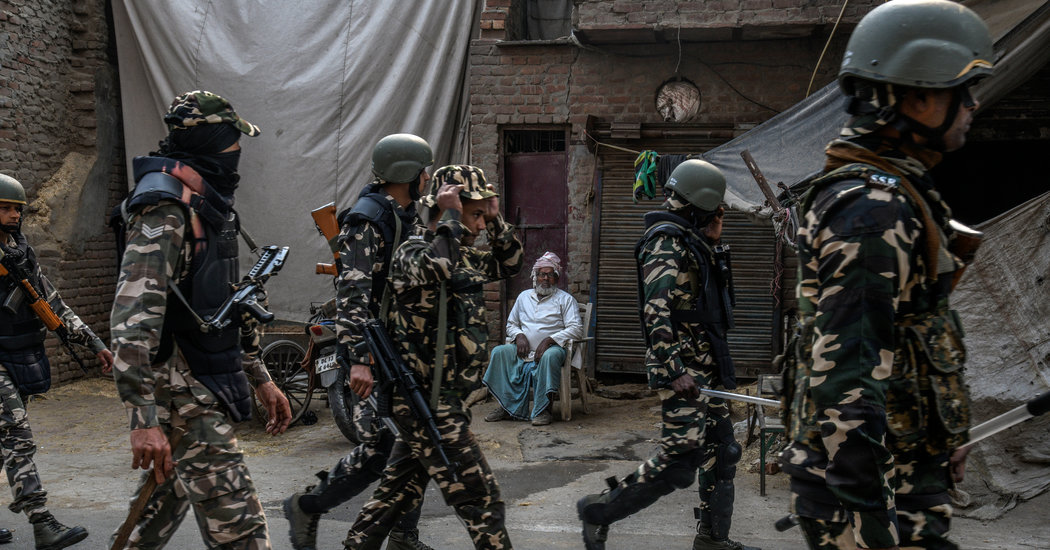 NEW DELHI — Until recently, Prime Minister Narendra Modi’s campaign to portray India as a rising power seemed to be ticking along despite troubles at home.

Much of the world remained quiet, or cautious, in recent months as India began locking up hundreds of opposition politicians and activists without charge across the country. Business executives say they are too afraid to speak out about shortcomings in the government’s economic strategy. The press complains of government intimidation.

But as the leaders celebrated each other in India’s capital, Hindu mobs began going after Muslim protesters in neighborhoods just a few miles away while the police looked on or joined in. And it was those images — the return of sectarian violence on the streets, not the carefully crafted show of international partnership — that has set the tone for India on the world stage over the past week.

“The Indian government has taken its Hindu nationalist agenda to a new level with a succession of policies,” the group said, “threatening the democratic future of a country long seen as a potential bulwark of freedom in Asia and the world.”

In a rare move, the United Nations High Commissioner for Human Rights filed a petition in India’s Supreme Court on Tuesday to challenge a citizenship law that critics say discriminates against Muslims. Some of India’s closest partners have begun criticizing its treatment of Muslims and migrants, with condemnations coming in from Iran, the United States, Bangladesh and elsewhere.

“If India loses that secular, democratic identity then it loses what makes it different than other countries in Asia. We are all watching the riots in Delhi and worry they are going down a dangerous road that makes it harder for us to be a strong advocate for India,” said Representative Ami Bera, a California Democrat who is the longest-serving Indian-American in Congress.

Mr. Bera, who has long lobbied for closer U.S. relations with India, added, “If they want to become a global power, well, that comes with certain responsibilities.”

Though there has been no sign yet that big doors are closing internationally, the violence in New Delhi has clearly opened a new chapter of international questioning of Mr. Modi’s agenda, and, perhaps, of the investment climate in a country hoping to turn its weakening economy around. The current unrest threatens one of India’s biggest appeals for investors or potential allies: that it is the world’s largest secular democracy.

In private conversations, diplomats are worried that the rhetoric coming from Mr. Modi’s governing Bharatiya Janata Party is creating an environment that could lead to more violence. They point out that B.J.P. members have been labeling protesters and opposition supporters as terrorists who were supported by Pakistan. One minister led crowds in chants of “shoot the traitors!”

One area where international officials believe that India may be particularly hurting itself is in its campaign to be granted a permanent seat at the United Nations Security Council along with other nuclear powers. Speaking on condition of anonymity, several diplomats, including some from countries that have publicly pushed for an Indian seat on the Security Council, say that their governments are now reluctant to push the issue after India’s domestic unrest has laid bare the effects of Hindu nationalism there.

During his first campaign for prime minister in 2014, Mr. Modi downplayed his Hindu agenda. His first term was marked by an energetic foreign policy and alliance building. Domestically, he focused on development and economic reforms. He promoted himself as a globalizer and unifier, friends with everyone: the Israelis and Palestinians, the Russians and the Americans.

After winning a second term last year, Mr. Modi’s government prioritized issues that appealed to its Hindu-nationalist base, and the prime minister himself talked less about economic reform.

In August, the government scrapped the statehood of India’s only Muslim-majority state of Kashmir and locked up hundreds of its politicians and activists without charge. In December, the government approved a citizenship law that would expedite citizenship for every major religion in the region except Islam. Coupled with a citizenship test, observers worry the policies will disenfranchise India’s 200 million Muslims, 14 percent of the population.

Now, though none of the Western world leaders who have sought closer partnership with India have yet to issue strong warnings about the sectarian violence in India — at least publicly — more criticism is coming in.

On Tuesday, the U.N. High Commissioner for Human Rights filed its petition in India’s Supreme Court to challenge the citizenship act, claiming the law undermines the country’s “human rights obligations.” India’s foreign ministry has asked the Supreme Court to overturn it.

Last week, the United States Commission on International Religious Freedom condemned the violence in Delhi, after suggesting in December that the American government consider sanctioning India for the passage of the citizenship law.

Iran, which has close ties with India and has typically refrained from commenting on others’ affairs, issued a rare condemnation this week about India’s treatment of Muslims.

The Organization of Islamic Cooperation slammed the riots as “anti-Muslim” last week. Just last year the O.I.C. had invited India as its guest of honor, which Delhi hailed as a diplomatic victory. While India’s Muslims are a minority at home, its Muslim population is the second largest in the world. But it never had a voice at the O.I.C. until last year, coveted progress that is now at risk.

Allies worry that India’s domestic turmoil is creating unnecessary tensions with its neighbors, which could help China in the long run as it tries to expand its influence in South Asia.

Relations with Bangladesh are at a low, after India’s powerful home minister, Amit Shah, called illegal migrants from Bangladesh “termites” last year when justifying the need for the citizenship test. Afghanistan, which rarely comments on other countries’ affairs and has a warm relationship with India, has expressed its displeasure about the sectarian undertones Mr. Modi’s government has recently taken, which includes jabs at Afghan migrants.

The country’s domestic politics are now at risk of blowing up India’s global ambitions. Two officials in the ministry of external affairs, who spoke on condition of anonymity to avoid being punished, complained that when visiting foreign dignitaries arrive in Delhi, they spend most of their meetings defending their country’s domestic policies instead of fostering bilateral ties.

Some American officials worry that the condemnations from the U.N. or the United States Commission on International Religious Freedom may damage its bilateral relationship with India and encourage Congress to halt further weapons sales.

But India’s government is likely betting that the international criticism will blow over. With the rise of nationalism globally, leaders like Mr. Trump have been less concerned about human rights than protecting their own national interests, which include military and trade relationships with India.

India’s external affairs minister, Subrahmanyam Jaishankar, noted earlier this week that the rise of nationalism across the world was providing an opportunity for India to shape its domestic politics. He argued that India would rise in a “polarized world.”

India’s faltering economy may also pose a threat to its ambitions.

The economy is experiencing its slowest growth in nearly a decade, with unemployment at a 45-year high. Government officials seem more focused on crushing political opposition than shoring up the economy, observers worry, and domestic turmoil might push more international investors away. Foreign direct investment in India slid 1.4 percent last quarter, after foreign investment reached a 10-year low in 2019.

Mr. Modi’s “party has always had two objectives: advancing Hindu nationalism and reforming the economy. There was this feeling that these two things had equal weight, but that is now dissipating and creating a lot of whiplash in corridors across Washington,” said Milan Vaishnav, the director of the South Asia Program at the Carnegie Endowment for International Peace.

“Modi wants India to play a more active role globally, but all of that without robust economic growth at home is an empty shell,” Mr. Vaishnav said. “The nationalism is not only taking over economy agenda but actively undermining it.”

While Mr. Modi’s government tends to dismiss all criticism as “anti-Hindu,” they are often sidelining some of their biggest fans, like Representative Bera, the California congressman, or friendly neighboring countries.

“India is very sensitive to any criticism. If they want to be that world leader, they can’t be so sensitive all the time,” Mr. Bera said. “The U.S. is criticized all the time, and we take it.”