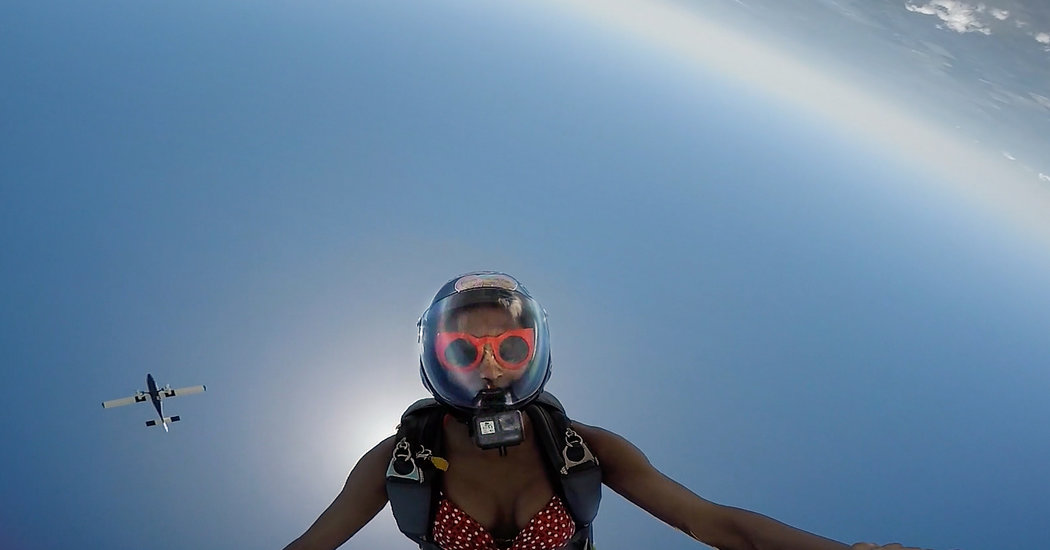 This article is part of our Women and Leadership special section, which focuses on approaches taken by women, minorities or other disadvantaged groups challenging traditional ways of thinking.

Danielle Williams has been skydiving since 2011. Whenever she shows up at a new place, even when she is carrying all her equipment — a sign she is no novice — the staff assumes she is a beginner.

After shrugging it off at first, she began to believe that people made that assumption because she is African-American and a woman.

“There’s a pretty common phenomena for black skydivers — regardless of where you are in the world,” she said, “that when we travel to a new drop zone, we’re always ushered to the tandem area” — where new skydivers jump connected to an instructor. “It doesn’t matter whether you have a year in the sport or 25 years in the sport.

“As the years went by, I realized it had nothing to do with being new — it had everything to do with my race being the salient factor that people hyperfocus on. We joke about it, but it’s very frustrating.”

A graduate of Harvard University, a 10-year Army veteran and a social media manager for a trade association, Ms. Williams, 33, decided that the problem was not a lack of fellow African-American jumpers; she found some when she looked. It was their lack of presence in the media, in advertising or even by environmental nonprofits. The same was true for people of color who take part in other outdoor activities, such as hiking or kayaking.

So she became one of the driving forces behind efforts to establish communities, online and off, for people of color who enjoy outdoor sports.

Ms. Williams grew up in a military family — her parents served in the Army — but with its feet steadfastly on the ground. She was a platoon leader for an Army construction unit in Iraq, but during her training in the United States she learned static-line parachuting, in which a line connected to the plane pulls open the chute.

When she returned from Iraq, she was looking for something exciting to try. “A lot of my friends were getting motorcycles,” she said. “I wanted to do something different.”

Her first jump, a tandem, was on her 25th birthday. She loved it but didn’t plan to continue. “I thought it was something people did just one time,” she said.

Then she met a friend of a friend who was a skydiver “and that blew my mind,” Ms. Williams said.

”I didn’t know there were people who jumped on the weekends just for fun,” she added, “and that there was an entire community.”

She was about to move from Fort Campbell, Ky., to Fort Rucker, Ala., and decided to become a licensed skydiver. Ms. Williams received her certification after about half a dozen jumps on her own but with an instructor close by, then became licensed after 25 solo jumps.

But the longer she was in the sport, the more she felt isolated, both by how she was treated (not unkindly, but with ignorance) and by never feeling wholly part of the community. She longed to belong to a skydiving group where she could feel completely comfortable, with people who looked more like her.

So, in 2014, Ms. Williams co-founded Team Blackstar, for skydivers of color, which now has about 270 members. They do an annual jump together and have a private Facebook page where these issues are often a topic of discussion.

Two years later she established Melanin Base Camp, an online community for people of color in adventure sports. It started on social media and “was a way to connect, so as not to feel like we’re the only one.” It now has nine bloggers, a monthly readership of 17,000 on the website, and 26,000 followers on Instagram.

“You don’t have to be climbing Everest — that’s not the goal,” Ms. Williams said. “It’s to focus on accessible outdoor activities. So the majority of our followers are day hikers — they like hiking on the weekends. A lot of our content is around hiking.”

She also started Diversify Outdoors, a coalition of 30 entrepreneurs, influencers and nonprofits that promotes diversity in the outdoors.

Favia Dubyk, a pathologist, knew Ms. Williams from Harvard, where both were on the track team. She climbs boulders without ropes or harnesses.

Dr. Dubyk, who blogs for Melanin Base Camp as “the climbing doctor,” said Ms. Williams is unusual in that she “doesn’t just connect people in one sport — she’s connecting people of different sports who have the same core interest in being outside and being athletic.”

Dr. Dubyk tells the same stories as Ms. Williams; people often assume she is a novice at climbing, even if she clearly knows what she is doing. And if she is climbing with a white man, she is often ignored by others.

“Generally, in climbing, women aren’t treated as well as men, no matter your race,” said Dr. Dubyk, who lives in Albuquerque.

And, like Ms. Williams, she assumed there were not many nonwhite climbers because she rarely saw them. But then she discovered a group called Brown Girls Climb, which includes largely African-Americans, Latinos, Asians and L.G.B.T.Q. climbers.

And it helps. “It’s nice to be seen,” Dr. Dubyk said. When she tells white people of her experiences, “the common answer is ‘it’s a misunderstanding — they definitely didn’t mean that.’ I have to explain to them why it’s not a misunderstanding, and it gets really exhausting. At these groups like Brown Girls Climb or Melanin Base Camp, I don’t have to explain.”

Carolyn Finney, author of “Black Faces, White Spaces: Reimagining the Relationship of African Americans to the Great Outdoors,” said she wrote the book after she spent five years backpacking around the world in the late 1980s and early 1990s, “when no one like me was doing it.”

Dr. Finney, 60, a scholar in residence at Middlebury College in Vermont, said that as part of her dissertation, she looked at 44 random issues of Outside magazine from 1991 to 2001. Out of 4,602 people who appeared in photos, 103 were of African-Americans, she found, and almost all those were of well-known male sports figures in urban settings.

Since then, she said, the magazine has “really stepped up its game” in a number of ways, including asking Dr. Finney and others to write opinion pieces.

The goal is not just recognition of people of color as part of the world of adventure sports, but, for those who want it, the ability to attract company sponsorships, media coverage and public acknowledgment.

And to make sure girls — and boys — of color see people who look like them embracing the outdoors.

“Danielle, myself and others like us, we’re trying to expand the field of whose voice counts, whose story counts,” Dr. Finney said.

In late 2016, Ms. Williams learned that she had rheumatic fever and since then has had a variety of medical problems related to that diagnosis. She is also busy with other projects: Melanin Base Camp, through funding from a Kickstarter campaign, is finishing a short film called “Titan Project” about Sabrina Chapman, a black climber who is Canadian. It is scheduled for release this year.

But she still has a passion for skydiving, and although she plans to jump less than before, she has no intention of giving it up, she said.