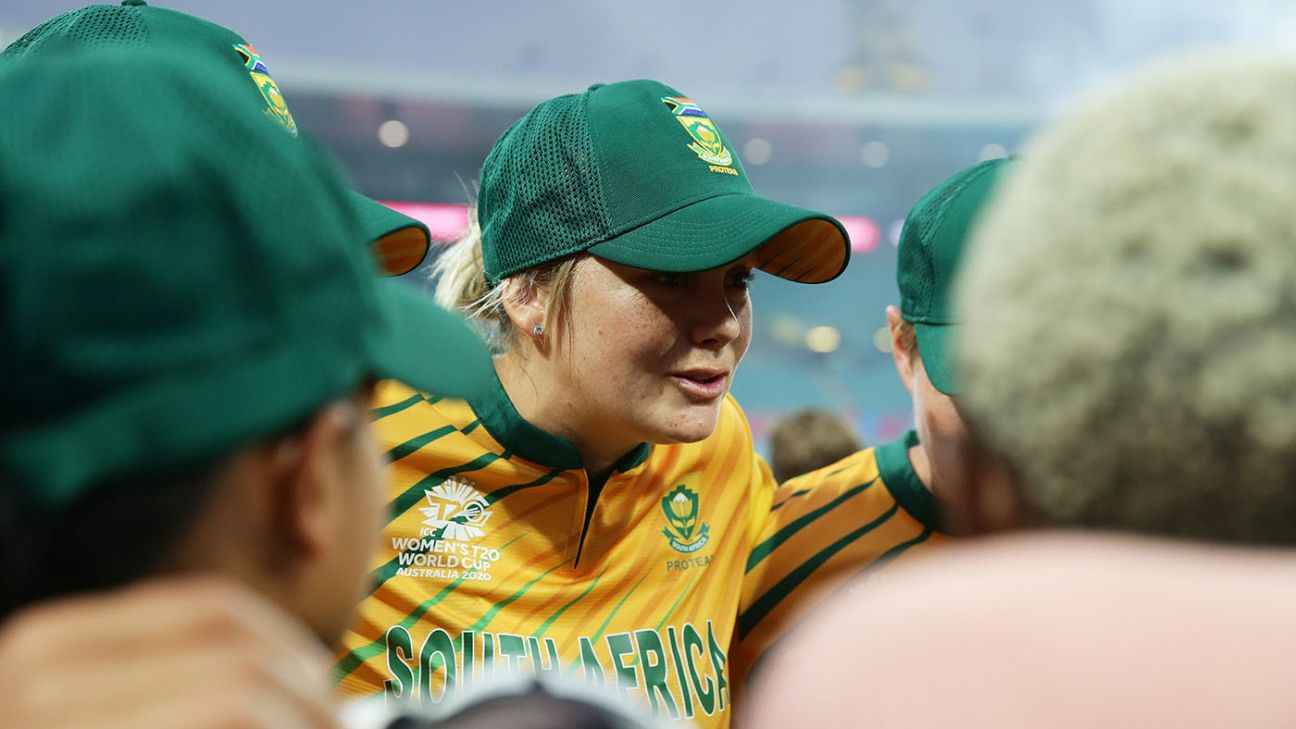 Van Niekerk’s views came in the wake of a five-run defeat for her side, having been set a DLS-calculated chase of 98 in 13 overs, with Australia having batted a full 20 overs to put on a competitive 5 for 134. Only hours earlier, the washed-out first semi-final had facilitated Group A-toppers India’s qualification into their first T20 World Cup final, at the expense of England, and heightened concerns the second match in the double-header at the SCG would end similarly.

With rain forecast through the evening, the requirement of a minimum of 10 overs a side for the semi-final to yield a result kept defending champions Australia on tenterhooks. The hosts’ innings had only just ended when a heavy spell of rain arrived, forcing a 40-minute delay and eating into the overs available for the South Africa chase. As with India, a washout in their semi-final would have propelled South Africa into Sunday’s final on the basis of group position.

“I am not going to sit and lie and say, ‘You don’t think about it,'” van Niekerk said, when asked if her team had been tracking the weather updates through the day. “I have to give credit to the groundstaff; they did absolutely everything to keep us on the park. And we are here to play cricket. I’d rather lose than get a free pass into the World Cup final.”

Before the game, van Niekerk had unequivocally lined herself up on the side of the debate that argued in favour of reserve days for world tournament knockouts. “To lose out because of weather is probably not ideal,” she said on Wednesday. “And I don’t think it should be like that. I believe in the future, semi-finals and finals should definitely have reserve days.”

Merit, and not the elements, eventually decided the outcome of closely contested Australia v South Africa face-off. Laura Wolvaardt revived a flagging chase with an enterprising 27-ball 41 not-out after coming in at No. 5, with South Africa teetering at 3 for 24 in the fifth over. By the end of the ninth over, the required run rate had peaked at 10.75 runs an over, but two fours from Wolvaardt in the 10th injected much-needed impetus into the chase. Vitally, an outcome in the game was by now guaranteed.

With 32 needed off the last three, Wolvaardt kept South Africa in the hunt with an array of picture-perfect drives and straight-batted brisk hits, even as she lost partners at the other end and another incoming round of drizzle started titling the odds in Australia’s favour. A six off the last ball of the 12th over reduced the equation to 19 off the last over, which eventually proved five runs too many for South Africa to alter their winless record against Australia in international cricket.

For van Niekerk, though, the character in Wolvaardt’s fightback – and through the tournament where South Africa won three out of their four completed league games – stood out as a highlight of their campaign.

“I don’t have to [do anything to keep her confidence up],” van Niekerk said. “She is a smart kid. First of all, she loves the game of cricket. The fact that she gave up medicine to play cricket, that says a lot. She loves cricket, she just wants to bat all the time, and gets upset if she doesn’t bat.

“She gets upset when she sits on the side and it showed in this World Cup. She wanted to be out there. She apologised for not getting the last runs [laughs]. She couldn’t have done anything more. She’s been brilliant; she’s my pick of the tournament as well.”

With the big-hitting Chloe Tryon coming in as low as No. 6, questions over the order of the line-up lingered after South Africa came up short again – for the second time across the three most-recent world tournaments, their semi-final in the 2017 ODI World Cup also having ended in “heartbreak”.

But van Niekerk defended the batting order. “No. I feel like Sune [Luus] and Wolfie did really well,” she said. “They changed the momentum in the middle and then at the back end of the innings. I was still quite confident when Chloe went out there even with the last over; it’s three hits away, especially for somebody with her power.

“She miscued a full toss; nine out of ten time she would hit that probably on top of the roof. That’s the nature of the game. It’s never easy to come in and just swing away, no matter how strong you are. Chloe came in at the right time. I think the second half of the last over was bowled in brilliantly. That stopped the momentum a bit.”

On the eve of the semi-final, van Niekerk had backed her team – “the best” South Africa have had in a while – to make the final, even though she had conceded they were “babies” compared to four-time champions Australia. But the chasm in experience between the No. 1-ranked team and South Africa ultimately cost them another shy at a maiden title.

“They are experienced in knockout games,” van Niekerk said. “Let’s be honest, we’ve only been in three [semi-finals]; they’ve played countless. I have to give them credit, their plans were spot on. The way they started their tournament [losing to India], to where they are now – it tells you about the quality of their team.

“You can never write off the No. 1 team in the world, and they showed tonight why they are, and why they came back. At one stage, it was our game to win, and theirs to lose. [They] turned the tables again. It comes with experience, and confidence. I believed they are the deserved No. 1 team at the moment.”