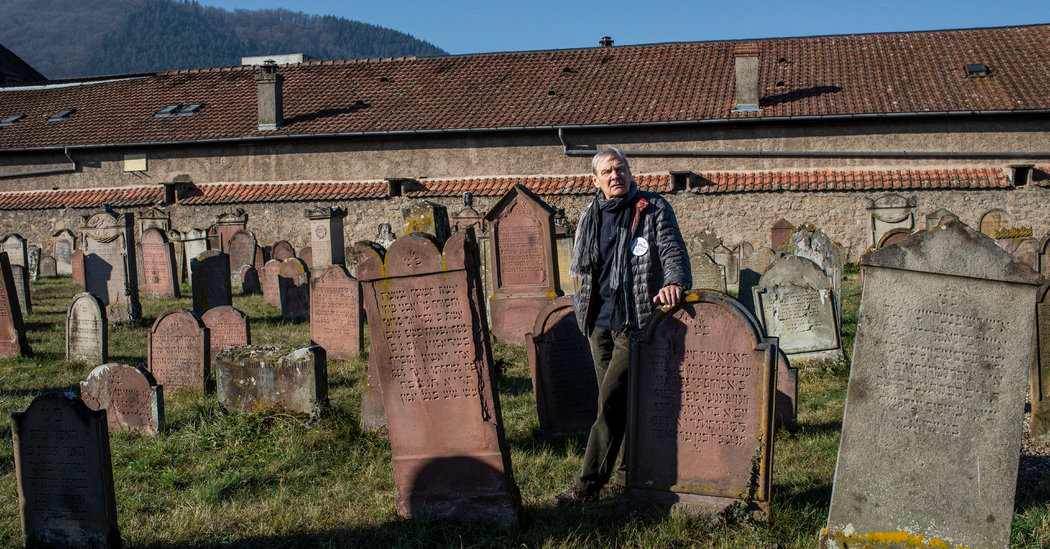 WESTHOFFEN, France — Some of the forgotten tombstones in the old Jewish cemetery look suspiciously whitened. It took vigorous scrubbing to get rid of the swastikas.

The defacing in December of gravestones in the cemetery in Westhoffen, a sleepy village in Alsace, was not isolated. In the absence of actual Jews in the Alsace countryside, their tombs have become easy targets in a region with an uneasy relationship to a troubled wartime past and a penchant for voting far right.

Last year there were 50 similar incidents targeting Jews in Alsace, a historical cradle of French Judaism, where Jews have lived since the Middle Ages. Cemeteries, schools and village walls were daubed with swastikas or obscure references to the Third Reich.

In Westhoffen’s cemetery, 107 tombstones were defaced; in the one in Quatzenheim, a village to the east, 96 were.

Eighty years ago, Alsace was incorporated into Nazi Germany, and wartime local officials did the Nazis’ bidding. The swastika was everywhere. Jews were expelled, deported and killed.

But today’s local authorities found intolerable the image of old Jewish graves in contemporary France being defaced with the Nazi symbol.

So they took an unusual step: organizing volunteers to patrol Alsace’s 67 threatened rural Jewish cemeteries, protecting some of these neglected vestiges of a time when Jews, excluded from the city, were forced to flourish in the Alsatian countryside.

There are 20 volunteers — retired teachers, farmers, housewives and students. That none are Jewish heightens the interfaith symbolism.

Each is equipped with a big badge that reads “Guardians of Memory.”

“In the face of these acts, it’s important for me to not just say something, but to do something, to act concretely to fight this, to try to stop it, and to pass the message that these acts actually reinforce civil society,” said Axel Imhof, a 28-year-old Protestant pastor who has signed up as a guardian in his village, Lauterbourg.

Even before the official imprimatur, some of the “Guardians,” a few of them living next to the cemeteries, had already been keeping an eye on them.

“I had friends whose parents didn’t come back” after the war, said Lise Tornare, 75, explaining why she and her husband, Robert, are committed to protecting the 200-year-old Jewish cemetery at their doorstep in Wintzenheim, outside the city of Colmar.

The patrol is a symbolic effort, flecked with ambiguities. Nobody pretends the volunteers will prevent the next “profanation,” as these recurring episodes are referred to by locals.

Some of these vulnerable old cemeteries exist isolated in the middle of the Alsatian forest. The authorities have never found the perpetrators of last year’s incidents.

“In some sense, there’s a silence in the surrounding population,” said Freddy Raphäel of the University of Strasbourg, the dean of historians of Alsace Judaism. “It isn’t possible that something like this happens in a village, without somebody knowing.”

“It’s a silence that I compare, unfortunately, to the silence when the Jews were kicked out in 1940,” Mr. Raphäel added.

Initially at least, offers to help were not lacking.

“We thought it was going to be complicated,” said Laurent Schilli, who heads the Colmar synagogue’s governing body and organized the volunteers, with the local authorities. “But very quickly we had 20 people.”

Still, Mr. Raphäel noted that the pace of new volunteers has slowed, and the network is not yet in place in the Bas-Rhin department, where the majority of incidents have occurred; it’s operational only in the Haut-Rhin, the other Alsatian department.

Mr. Schilli worries that the cemeteries are still far from safe.

“The real question is not who did it, but which will be the next cemetery touched,” he said. “The best we can do is discourage it. But prevent it from happening again — I don’t see how.

Officials here say anti-Semitism is no longer a significant menace in Alsace. Jews are not so sure.

“Certainly, it is present in Alsace,” said Francine Weill, whose relatives are buried in Westhoffen’s cemetery.

She was staring out over the recently cleaned graves, a slope of tombstones stretching to the vineyards beyond the village. The unkempt grass alleys and neglected ranks of markers, their stone casings mottled with moss and lichen, speak to the lost world of Jews here.

Ms. Weill recalled that her grandparents were given one hour to leave their house in July 1940.

Maurice Dahan, president of a Jewish community group in the Strasbourg area, said part of the problem was that “after the war our region didn’t face up to its past,” particularly the role of those who fought for the Germans.

Also, surviving Jews who returned after 1945 found that former neighbors didn’t want to give up the apartments and furniture they had seized with the help of the Germans, Mr. Raphäel said.

The memories of that history make what is happening in the present all the more painful.

In the first round of presidential elections in 2017, the far-right National Front swept rural Alsace, making authorities here particularly sensitive to what Mr. Raphäel called the region’s historically “difficult relationship” with its Jews. Extremist, white supremacist organizations regularly surface here, and there have been far-right gatherings in Strasbourg.

Officials organizing the “Guardians of Memory” and the volunteers themselves “don’t want people to think that in Alsace, there is only that,” meaning the cemetery attacks, said Philippe Ichter, a regional official who helped organize the effort.

“It’s an act of resistance,” Mr. Ichter said. “The hour is grave. But we can engage ourselves.”

In Wintzenheim’s cemetery the other day, the Tornares, retired school employees, wandered the weathered, centuries-old pink-grey headstones with Hebrew lettering — “Here lies a precious man, simple and upright,” reads that of Jacques Wurmser, who died on March, 25, 1840 — as if it were their backyard.

“It’s out of friendship for the Jewish community,” said Ms. Tornare of their decision to look after the cemetery informally long before they were recruited. “You know, when you take care of a place for 40 years, it becomes like a garden to you,” Ms. Tornare said.

But past attitudes and indignities mingle with the present. Not all the stereotypes have disappeared, and the casual expression of anti-Semitic tropes is still widely socially acceptable in France.

A large bald patch amid the headstones in the Wintzenheim graveyard is testimony to the day in 1945 when the retreating Germans forced inhabitants of the village to dig up the headstones to be used as an anti-tank barrier against the advancing Americans.

The barrier was never used. But the residents of Wintzenheim, where Jews had lived since the 15th century, never put the headstones back. They used them instead in their postwar garden walls, or as paving stones. This still rankles.

At the Jewish cemetery in nearby Grussenheim, a lonely spot lost amid the vegetable fields at the edge of town, Sylvain Sutter, a farmer, had already been taking care of the cemetery before the “Guardians of Memory” initiative started, having been recruited years earlier by a merchant with relatives buried there.

“So for me, this doesn’t change very much at all,” Mr. Sutter said.