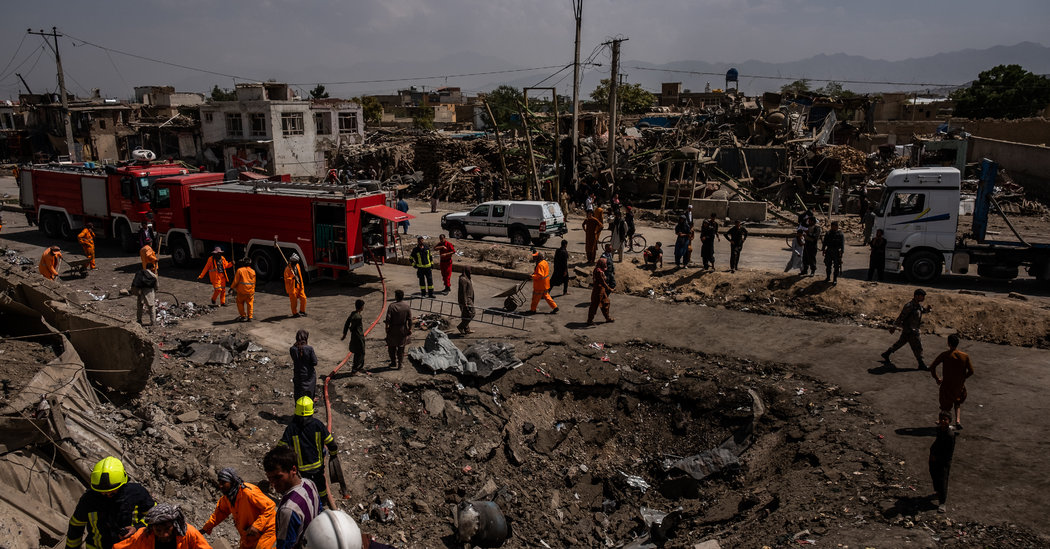 LONDON — An international court ruled on Thursday that its chief prosecutor could open an investigation into allegations of war crimes in Afghanistan, including any that may have been committed by Americans, setting up a potential showdown with Washington.

The ruling by the International Criminal Court in The Hague is likely to draw a strong rebuke from the United States, which does not recognize the court’s jurisdiction. Washington revoked the visa of the body’s chief prosecutor, Fatou Bensouda, last year after she signaled her intentions to pursue the case.

The decision on Thursday is the first involving American forces by the court, which was established more than 15 years ago to seek justice for victims of war crimes, crimes against humanity and genocide.

The State Department could not immediately be reached for a response.

Having spent years collecting information on the Afghan war, Ms. Bensouda requested permission to open an investigation into claims of war crimes and crimes against humanity attributed to United States military and intelligence forces, the Taliban and Afghan forces.

The prosecutor has said that the court had enough information to prove that U.S. forces had “committed acts of torture, cruel treatment, outrages upon personal dignity, rape and sexual violence” in Afghanistan in 2003 and 2004, and later in clandestine C.I.A. facilities in Poland, Romania and Lithuania.

The United Nations’ mission in Afghanistan has documented the killings of more than 17,000 civilians by the Taliban since 2009, including nearly 7,000 targeted killings. Yet, last year, a U.N. report found that U.S. and Afghan forces had killed more civilians than the Taliban did.

A pretrial chamber at the court rejected Ms. Bensouda’s request in April, arguing that a successful prosecution was unlikely because the United States and the Afghan government, which has set up its own investigation unit, were unlikely to cooperate.

Prosecutors appealed the ruling, and appeals judges at the court ruled on Thursday that the investigation could proceed.

“The prosecutor is authorized to commence an investigation into alleged crimes committed on the territory of Afghanistan since May 1, 2003, as well as other alleged crimes that have a nexus to the armed conflict in Afghanistan,” said Piotr Hofmanski, the presiding judge of the appeals panel.

The ruling came days after the United States signed a deal with the Taliban to withdraw U.S. troops from Afghanistan after nearly two decades of conflict.

American officials have long sought to pressure the court not to prosecute United States citizens, arguing that doing so would threaten American sovereignty and national security interests. In 2018, John Bolton, then the national security adviser, denounced the court as “illegitimate.”

Secretary of State Mike Pompeo vowed last year to revoke visas for anyone involved in an investigation against American citizens.

Human rights organizations, however, welcomed the court’s ruling as a sign of its willingness to press ahead despited the Trump administration’s efforts to stymie the inquiry.

“This decision vindicates the rule of law and gives hope to the thousands of victims seeking accountability when domestic courts and authorities have failed them,” said Jamil Dakwar, director of the American Civil Liberties Union’s Human Rights Project.

He added, “Countries must fully cooperate with this investigation and not submit to any authoritarian tactics by the Trump administration to sabotage it.”

The A.C.L.U. represents three detainees who said they were tortured in Afghanistan between 2003 and 2008: Khaled El Masri, Suleiman Salim and Mohamed Ben Soud.

It remains to be seen how prosecutors would investigate allegations without the cooperation of the Trump administration or the Afghan government. Afghan officials have objected to the inquiry, arguing that they had set up their own special unit to look into alleged war crimes.

For some Afghan civilians, however, the ruling brought hope that a supranational jurisdiction could bring them justice.

Masih Ur-Rahman Mubarez, whose wife, seven children and four other relatives were killed in an American airstrike targeting members of the Taliban in Wardak Province in September, said he felt some relief after knocking “every single door for justice.”

“I will never find peace of mind,” Mr. Mubarez said. “But if the I.C.C. punishes Americans who killed my children, I will be happy.”