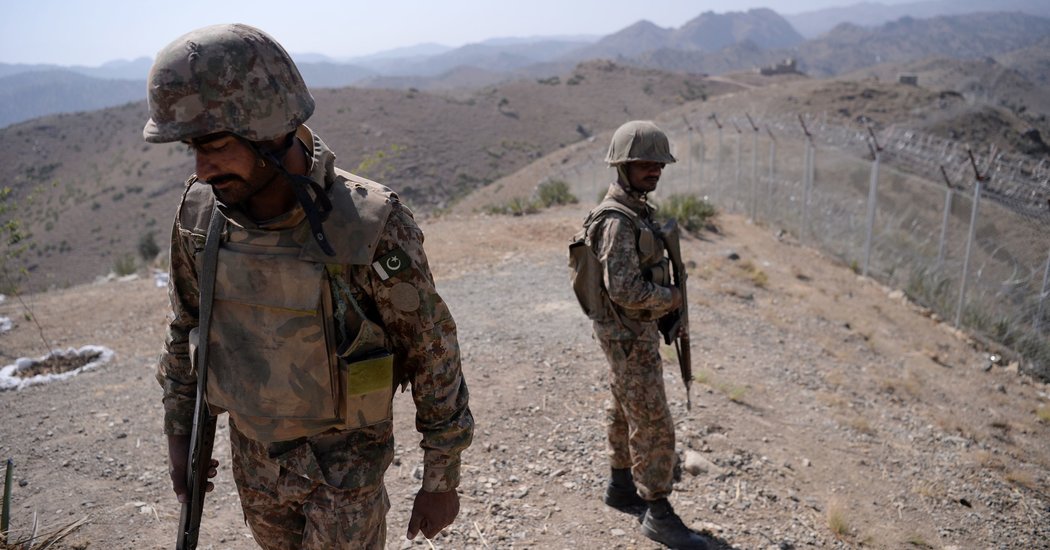 WASHINGTON — It was three days after the Sept. 11 attacks when Pakistan’s president yielded to the American demands — but also delivered a warning.

President Pervez Musharraf told the American ambassador in Islamabad that his country would assist the United States in its looming war against the Taliban, long the recipients of Pakistan’s patronage. But, he said, he hoped the war would be short and limited in scope, and would not create a hostile neighbor for Pakistan.

“You are there to kill terrorists, not make enemies,” he said, according to a now-declassified diplomatic cable, adding that Pakistan wanted a “friendly” government in Kabul.

In fact, the Afghan war has been long, bloody and destabilizing. But more than 18 years later, and after years of secret machinations by Pakistan’s spy service to help equip and finance the Taliban, a fragile deal brokered last weekend holds the promise of an ideal outcome for Islamabad: a weak and pliable neighbor that Pakistan can influence long into the future.

Pakistan’s political and military establishment has long hoped for an end to the grinding violence in Afghanistan and the eventual withdrawal of American forces from the country, both of which the United States and the Taliban tentatively agreed to in Doha, Qatar. Moreover, the Taliban control large parts of the Afghan countryside — far from the control of the American-backed government in Kabul — ensuring that Pakistan’s longtime proxies wield considerable control over the country’s direction.

“The Taliban and Pakistan’s military that backs them see this as their victory,” said Husain Haqqani, a former Pakistani ambassador to the United States and a senior fellow at the Hudson Institute. “Pakistan bet on the Taliban for so long on the assumption that the Americans would leave someday.”

And yet regional experts warn that Pakistan risks playing a dangerous game if the American military withdrawal leads to a further descent into chaos — fueling a full-scale civil war in which India, Russia and others back different factions and dragging Pakistan into a protracted conflict.

Douglas London, a retired C.I.A. officer who ran counterterrorism operations for South and Southwest Asia, said Pakistan’s primary focus in Afghanistan was limiting the influence of India. For this reason, he said, “the bottom line is that Pakistan is far more comfortable working with the Taliban, which is preferred over the current government in Kabul.”

But, he said, they recognize that a full Taliban takeover of Afghanistan could be bloody and further draw in regional adversaries like India. For that reason, he said, for Pakistan the “status quo and some degree of chaos they influence is preferable to one extreme or the other.”

Pakistan’s longstanding ties to the Taliban were born from the Afghan civil war of the 1990s, when Islamabad saw the Pashtun group as a valuable proxy against other warring factions that had the support of India. That relationship was radioactive after the Sept. 11 attacks, when it became obvious that Al Qaeda had planned the strikes from a safe haven the Taliban had provided for the terrorist group.

The Bush administration forced Pakistan to make a stark choice: Sever ties with the Taliban and become a partner in America’s planned war against global terrorism, or possibly become a target of that war.

Mr. Musharraf and his successors held up part of the bargain: working with the C.I.A. to hunt down Qaeda operatives in Pakistan and allowing the spy agency to unleash a withering drone campaign in the country’s tribal areas. But Islamabad never fully cut ties with the Taliban, and the country’s military intelligence agency, the Directorate for Inter-Services Intelligence, spent years covertly supporting Taliban fighters in Afghanistan and shielding some of the group’s leaders inside Pakistan.

Today, some Pakistani officials argue that the Taliban is far different from the fanatical band once led during the Sept. 11 era by Mullah Mohammed Omar. The group is more pragmatic, they say, understanding the importance of political influence in a power-sharing arrangement. One senior Pakistani intelligence official in Islamabad described the Taliban simply as a political party.

It is Pakistan’s assessment, they say, that the Taliban struck a deal from a position of strength: The United States felt compelled to leave a war that the Taliban could have continued fighting for years. The senior Pakistani intelligence official did not hide what was his country’s primary focus in Afghanistan: The use of Afghan soil in collaboration with India is a red line, the official said.

The intelligence agency’s support for the Taliban strained — and eventually ruptured — America’s relationship with Pakistan, a longtime ally that the United States saw as a bulwark against Soviet expansion during the Cold War.

And yet American leaders wrestled with just how much to push Pakistan to cut ties to the Taliban, worried that pressure from Washington could undermine the military’s grip on the nuclear-armed country and lead to an Islamist takeover of Pakistan. This “too big to fail” attitude led to Pakistan having outsize influence over the strategy for America’s flailing war in Afghanistan.

Shortly after Barack Obama was elected president in 2008, Vice President-elect Joseph R. Biden Jr. traveled to Kabul to meet with Hamid Karzai, the Afghan president. As recounted in “Directorate S,” a book on the Afghan war by the journalist Steve Coll, Mr. Karzai asked for help from the new administration in getting the Pakistani government to clear out Taliban sanctuaries in Pakistan.

More than a decade later, the United States is trying to get out of the country and leave the warring Afghan factions to determine the country’s future. In the near term, that means negotiations between the Afghan government and the Taliban that could eventually lead to the group gaining representation in Kabul.

But the history of strife in the country does not portend a stable future of power sharing, and some regional experts see the prospect of a repeat of turmoil of the 1990s — when the Soviet withdrawal left a power vacuum and led to the Taliban takeover. That possibility, they say, could lead regional powers like India and Iran to support their favored groups with money and weapons.

“If the Taliban try to take complete control of Afghanistan, they will get resistance. It could intensify the civil war and bring other regional actors in,” said Carter Malkasian, a former Pentagon adviser who spent two years in Afghanistan’s Helmand Province as a State Department political officer.

The possibility of Pakistan becoming enmeshed in a long and costly civil war on its western front might be enough for military civilian leaders in Islamabad to tread carefully when using a hidden hand to influence the politics of a war-weary nation.

The goal, Mr. Haqqani said, might be to “continue to have the Taliban as proxies while trying to contain their wildest instincts.”