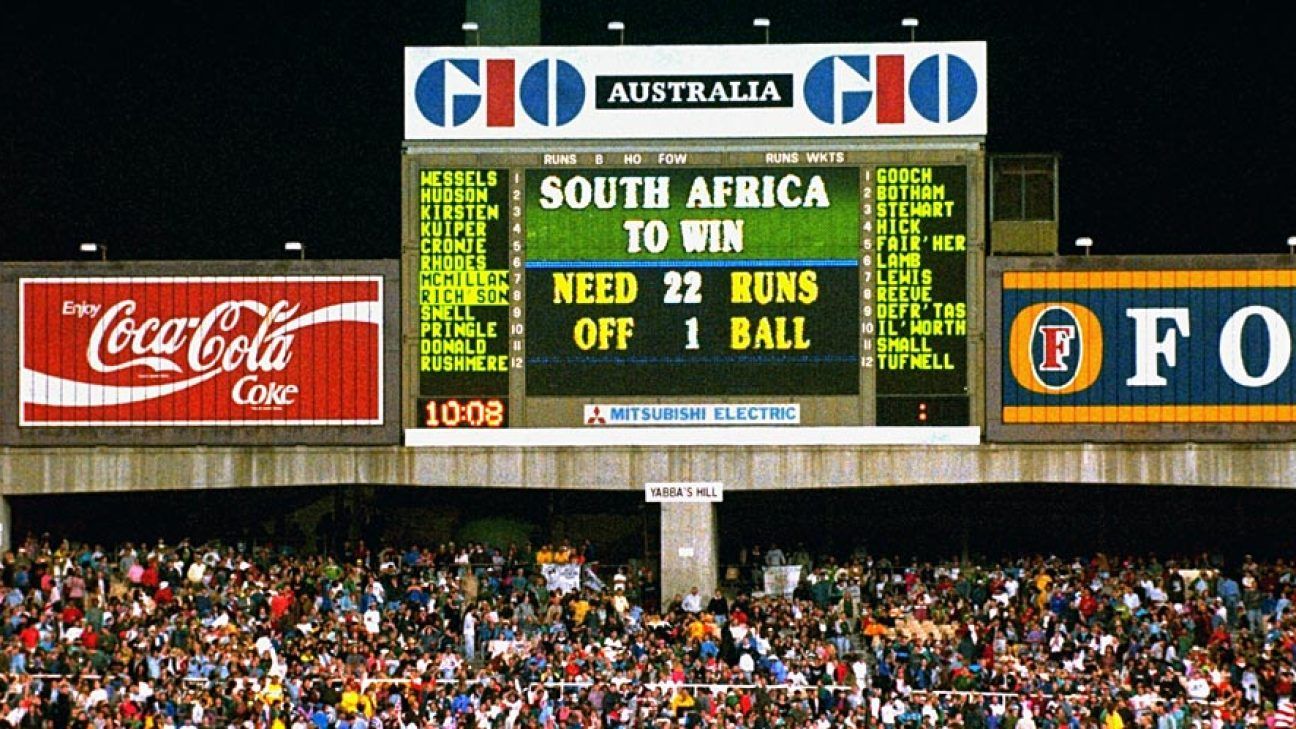 The miserable circumstances of England’s elimination from the Women’s T20 World Cup – knocked out of their semi-final at Sydney without a ball being bowled, on the same day that Australia scraped through in a later match at the same venue – bring to mind other high-profile occasions when cricket’s attempts to fight back against its oldest foe have come a spectacular cropper:

Richie Benaud is rightly praised for many things in his illustrious career. He was a formidable legspinning allrounder in a 63-Test career, and an innovative, attack-minded Ashes-winning captain. He was the voice of cricket for three decades, and its moral arbiter too. But if there was one blot on his copybook, it was his endorsement of the 1992 World Cup rain rules. They were an utter turkey.

Their logic was sound in principle. Rightly recognising, as the Duckworth-Lewis method later would, that it’s easier to pace your innings when you have a target in your sights than when you are batting blind, Benaud backed the notion of discounting the least-productive overs of the side batting first when setting a rain-adjusted target.

This ploy, however, didn’t work so well when the chase was all but over, and on the biggest stage yet, at Sydney … in March … in a World Cup semi-final … (sound familiar yet?), the system malfunctioned grotesquely thanks principally to a 12-minute shower, but also to Meyrick Pringle‘s supremely economical and self-immolating spell of 9-2-36-2.

When South Africa left the field, they needed a tantalising 22 from 13 balls, with Dave Richardson and Brian McMillan poised for glory. When they returned, they needed 21 from 1 (initially misreported as 22 from 1 on the big screen). McMillan duly patted a lobdown from Chris Lewis for a single and stalked off with a face like thunder, while England sheepishly counted their blessings.

In some respects, South Africa had only themselves to blame, given that their fielding stint had over-run so terribly (with rain always in the air) that England’s own innings had been truncated at the 45-over mark. But there was schadenfreude to be had in the final at the MCG three days later, when England were outgunned by the champions Pakistan – who owed their qualification to the washout point they had scrounged after being bowled out for 74 in their group-stage encounter.

What’s often forgotten in that farrago was that England, 24 for 1 after eight overs when the rain came, had not even been guaranteed winners that day … their adjusted target had been an awkward 64 from 16 overs, after the combined analyses of Derek Pringle (8.2-5-8-3), Ian Botham (10-4-12-2) and Dermot Reeve (5-3-2-1) had all but bowled Pakistan back into contention. Marvellous.

First, the good news. For the 2002 Champions Trophy – the second iteration of their newly minted fundraising knock-out competition – the ICC had all their contingencies in place. They’d arranged a reserve day for the final, and they had a widely respected (if utterly baffling) new rain rule in operation, with the Duckworth-Lewis method having been unveiled in 1997 and officially adopted by the board two years later. They even had a dream final in prospect – the hosts, Sri Lanka, against the regional giants, India – Murali v Tendulkar, Jayasuriya v Kumble. So far, so good.

Unfortunately, two fatal flaws intervened to derail the narrative. Firstly, the organisers in their eternal wisdom, decided to schedule their global jamboree in late September, slap-bang in the middle of the Sri Lankan monsoon. Secondly, they decided to make their final a day-night affair, thereby guaranteeing that the evening rain (by which you can set your watch, as England know all too well from their last visit in October 2018) was sure to start gathering towards the end of the mid-innings break.

And then, to cap it all off, the ICC decided that, no, they wouldn’t attempt either a shortened game, or a day game, or a single game spread over two consecutive afternoons. Nope, the solution they settled on was for two entirely different matches, with two nigh-on-identical upshots.

Sri Lanka won the first toss, and posted a respectable 244 for 5 before India reached 14 for 0 after two overs when the rains arrived. Twenty-four hours later, Sri Lanka won the second toss too, reached 222 for 7; India responded with 38 for 1 in eight. The Champions Trophy duly finished with no outright champion, but with one side having batted for 100 overs, and the other for 10. You couldn’t make it up.

So, those aforementioned Duckworth-Lewis tables, eh? A bit confusing, but somehow, like a stern “because I said so!” from a mildly irate parent, the presumed logic of D/L’s inner workings seemed to brook any real argument. And surely, for South Africa, proud hosts of the World Cup for the first time, and still not entirely over the misery of 1992 (let alone 1999…) it had to be an improvement on the rank injustice of the system that preceded it?

Wrong! Because as any number-cruncher will tell you, there’s no solving stupid. User error is the bane of statisticians worldwide, and with South Africa’s campaign on the line, a crumpled “D/L par sheet” (eh? Whazzat?), uneasily interpreted by the coach Eric Simons and relayed to the crease by the 12th man, Nicky Boje, wasn’t quite the clarity that their embattled batsmen needed.

Tension was rife under brooding skies in Durban. South Africa’s initial target of 268 was daunting enough in such conditions, but at 149 for 5 in the 30th over, the pressure was becoming intolerable. Mark Boucher and the captain, Shaun Pollock, dug in for a 63-run stand that spanned 80 deliveries – with Pollock’s 25 from 37 played out to a chorus of “hopes of the nation” chirps from Kumar Sangakkara behind the stumps. But when he was run out with 57 still needed from 45, the permutations began to engulf the hosts.

Not only did Pollock’s departure cause the D/L par score to leap – one fewer wicket in hand meant an extra handful of runs required to get on top of the rate – it also required a near ball-by-ball update of the requirement as Boucher battled to keep South Africa on course. Boje was eventually entrusted with the precious sheet itself, and was ready to deliver to the middle at the end of the 45th over, but it was too late to correct a fatal misinterpretation of the target.

With 46 runs needed from 32 balls, and rain so imminent he could smell it, Boucher crashed Muttiah Muralitharan for a six over long on to drag South Africa to what he believed was a winning total of 229. Kingsmead was ecstatic as he pumped his fists and doggedly blotted out the final ball of the over, preserving his wicket first and foremost before sprinting for the pavilion as the covers were hustled on …

“Boucher was given the message of 229,” said Pollock afterwards, as the significance of the ‘par’ in ‘par score of 229’ slowly dawned on him. “So he was pretty happy when he got that. You can look at all the ifs and buts but in the end it doesn’t help much.”

And so the manner in which the dream died proved to be iconically galling – an amalgam of South Africa’s worst World Cup nightmares: Elimination via rain-affected tie, as if their ghosts of their two semi-final exits had fallen in love and bred a vengeful, homewrecking poltergeist.

User error, mark two. For all that it’s fun to point and laugh at players who make a meal of the rain rules, it’s really not their primary job. For the umpires to cause such a cock-up, however, and on the biggest stage of all, is another thing entirely.

The shemozzle that shamed the 2007 World Cup final was a fitting epitaph for a tournament that over-reached itself through sheer greed. The bloated corporatisation of what ought to have been a joyous carnival of cricket created instead an embittered local cricket scene, priced out of their own tournament, and turfed out of their favoured old haunts, such as the Antigua Recreation Ground and Bourda in Guyana, in favour of soul-less out-of-town carbuncles that to this day have never come close to replicating the homespun vibe of Chicky’s Disco and the Mound.

And so, when the weather gods decided to teach the organisers a lesson by raining for four hours on their final parade, the ICC’s reaction was to over-reach itself for the benefit of the global TV audience.

At least, with a reserve day in place, they learnt some lessons from 2002 by beginning the match with a reduction in overs. Unfortunately, they over-estimated the teams’ abilities to cram a 38-overs-a-side match into Barbados’s six remaining hours of daylight.

At least in attempting to do so, there was time for one undeniable treat – a stunning 149 from 104 balls from Adam Gilchrist, an innings of exemplary poise and power that rightly dominates the highlights to this day and will forever distract from the nonsense that followed it. On his watch, the game was up, notwithstanding a gutsy pair of fifties from Jayasuriya and Sangakkara, and Sri Lanka were ready and waiting to shake hands when daylight duly ran out with five overs of the game left unbowled.

The umpires, however, weren’t so easily swayed. Rudi Koertzen, who wasn’t even the standing umpire, began loudly insisting that the show had to go out, despite Ricky Ponting’s protestations that they’d bowled 20 overs to constitute a match and “Look mate, we’ve finished the game.”

But no. “When light is used in the calculations of a day’s play, it doesn’t necessarily mean it is the end of a day’s play,” explained Jeff Crowe, the match referee, who must wonder what the sun gets up to all night, the lazy glowing orb. Instead, the players went through the motions for 18 more deliveries before finally the plug was pulled in light so bad that no-one in the stadium could see the final ball, let alone a glitzy and utterly futile closing ceremony.