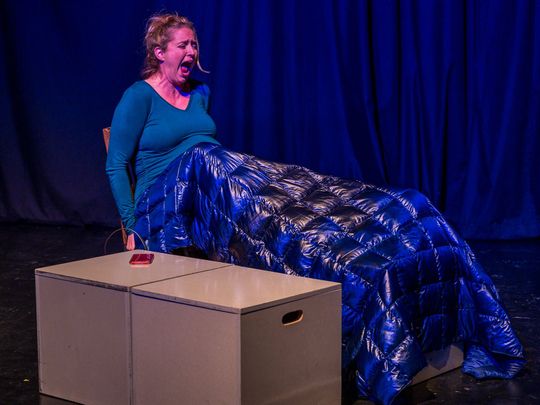 To be judged by your peers — to showcase your talent in a roomful of people who understand how difficult the journey has been and how rewarding the moment is. That is what the Short + Sweet Theatre festival, which ends on March 7, offers.

For the group of UAE-based thespians the past couple of months ever since the 8th edition of the annual fest kicked off has been a lesson in the creativity of community.

These animated short tales take on different hues, languages — there’s everything from English to Bengali is in the mix — and subjects, from self-discovery to mythical moments. The commonality then — a love of storytelling.

Farzana Palathingal, a first-time director who has made it to the gala finals, tells Gulf News in an interview, “I saw all the plays that happened in the four weeks before my show. And they were brilliant. The talent that these people have is insane. And the languages that they brought up, the ideas that they brought up…There were quite a few shows that people wrote by themselves. It was really heart-warming to see that.” It was also nerve wrecking. She explains: “It’s kind of nerve wrecking to go on stage and do that — putting on something that you’ve put a lot of work into.”

Palathingal’s play, called ‘Sleepover from Hell’, which delves into the dynamics of creating personal relationships — during a sleepover — is a one-woman show. “It’s just me, just a monologue — it’s difficult for me to look at it from the outside and see where my downfalls are, see where I can tweak things. So it had a lot of me taking videos of myself to see and analyse to see what I had to do and where I had to change,” she laughs, going on to explain that it’s the sense of camaraderie that the format invokes that allows one to go put their heart out on stage.

For Satya Baskaran, another director, performance was nothing new, but it was a collaborative bonanza. “Putting up a play, whether it’s a ten-minute play or a full length play is a wholistic vision — it can’t just be this is what I want to do. Because they can bring something you didn’t even consider. I was fortunate enough to get two talented actors who did just that. It was very much a collaborative process and there were times when I sort of took charge and said we are doing this, however within this sandbox you guys play and bring, you know, what you think might work and they were very, very open to that,” he says.

This is his first Short + Sweet venture, but the actor-director says the play he put on hit a mark because of its rom-com feel-good vibe.

Baskaran’s play is called ‘On the Cross Bronx’. In it, says a descriptor: Kate is stuck in rush hour traffic on the Cross Bronx expressway, about to give birth. Police Officer Joe is the only one around to help her. And time is running out.

Tickets to see the Short+Sweet Dubai Theatre Festival at the Junction, on March 5-7, start at Dh80