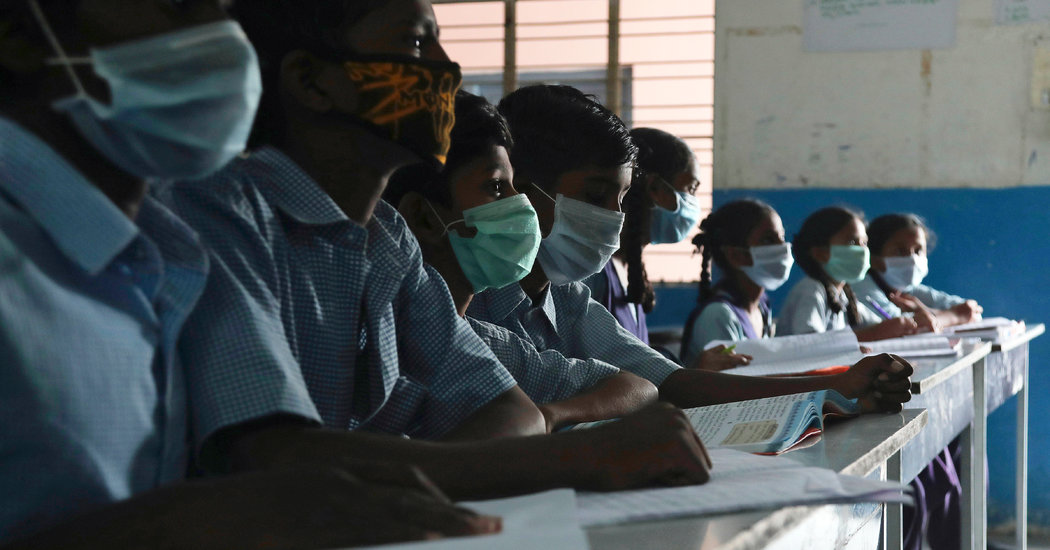 Life on hold for the coronavirus

Italy has shut down all of its schools, the latest step in a sprawling effort to halt the spread of the coronavirus that has kept hundreds of millions of students out of classrooms and day cares around the world.

It’s just one of a host of life-altering measures taken to preserve public health, and it has ripple effects: rising child care costs for parents, suppliers losing out on cafeteria food orders, babysitters and nannies in flux, and loneliness and tech glitches for kids in online classes, to name a few.

Exceptions: To maintain some sense of normalcy, performers and artists of all kinds are honing their show-must-go-on creativity. One Swiss pianist learned a complex score made for a 100-person ensemble in a day, after an orchestra was quarantined.

Another angle: The stigma is real for ex-Diamond Princess passengers, even those without symptoms, as their friends ghost them, neighbors shun them and strangers threaten them.

In other news: “Contagion,” Steven Soderbergh’s 2011 thriller about a fictional pandemic, has shot up in popularity since the start of the virus.

Mike Bloomberg, the former New York City mayor, has dropped out of the Democratic primary race, after the Super Tuesday elections made it clear that Joe Biden and Bernie Sanders appear to be the party’s front-runners.

Mr. Biden, the former vice president, won at least nine of the 14 states that voted on Tuesday, with a lead that was small but could be hard to beat. Mr. Sanders appeared to win the day’s biggest prize, California. Here are the full results.

Elizabeth Warren failed to win any states, including her home state, Massachusetts. She has not yet announced whether she will remain in the race. Here are five takeaways from the night.

News analysis: “Lifted by a hasty unity among center-left Democrats disinclined toward political revolution, Mr. Biden has propelled himself in the span of three days from electoral failure to would-be juggernaut,” our reporter Matt Flegenheimer writes.

Closer look: Interviews with voters found deep uncertainty about the Democratic field. “I don’t think we have a perfect candidate this time — we don’t have a Barack Obama,” said Justin Faircloth, a real estate investor and musician in Charlotte, N.C.

When the first sites selling hit-man services were discovered, people started to assume the dark web was crawling with assassins waiting to kill on command. But they have turned out to be a hotbed for scams, rarely, if ever, actually carrying out the crimes.

The sites do, however, ensnare the people who hire them, leading to salacious headlines that draw attention away from other crimes on the dark web, like drug markets and identity theft. “There is actual crime, but we are too busy talking about some guy who wants to kill his ex-girlfriend’s new boyfriend,” one researcher said.

Afghanistan: The Taliban resumed attacks against Afghan forces after signing a deal to end their war with the American military. The fighting raised concerns that the U.S. was leaving its Afghan allies vulnerable to an insurgency unwilling to let go of violence as its main leverage.

Read: Dennis Staples’s “This Town Sleeps,” Celia Laskey’s “Under the Rainbow” and Nana Oforiatta Ayim’s “The God Child” are all debut novels that feature outsiders in unwelcome territory.

Smarter Living: Microaggressions, the everyday insults that members of marginalized groups experience, can negatively affect one’s health or elicit symptoms of trauma. Here’s how to decide which ones to fight, and what to say.

In 1896, The New York Times adopted its now famous mission: “to give the news impartially, without fear or favor.” But what does this mean in practice? Some of our reporters and editors recently told us what they do to remain objective.

“I try hard not to take strong positions on public issues even in private, much to the frustration of friends and family. For me, it’s easier to stay out of the fray if I never make up my mind, even in the privacy of the kitchen or the voting booth, that one candidate is better than another, that one side is right and the other wrong.”

“I don’t go to marches, though that’s the hobby du jour in Washington right now. When my friends point out that Americans have the right to free assembly, I agree. I just also think of another First Amendment right, freedom of the press, and that is my focus.

“Impartiality, for me, is not about hiding something I really think, or trying to keep my real views from being exposed. It is about trust. I think about my readers a lot. I want them to trust me.”

Read more of our journalists’ responses.

Thank you
To Mark Josephson and Eleanor Stanford for the break from the news. Lara Takenaga wrote today’s Back Story. You can reach the team at briefing@nytimes.com.

P.S.
• We’re listening to “The Daily.” Our latest episode is about the Super Tuesday results.
• Here’s our Mini Crossword, and a clue: Witty remark (four letters). You can find all our puzzles here.
• Clinton Cargill joined our National desk as an assistant editor to help build momentum toward a more visual and digitally native report.