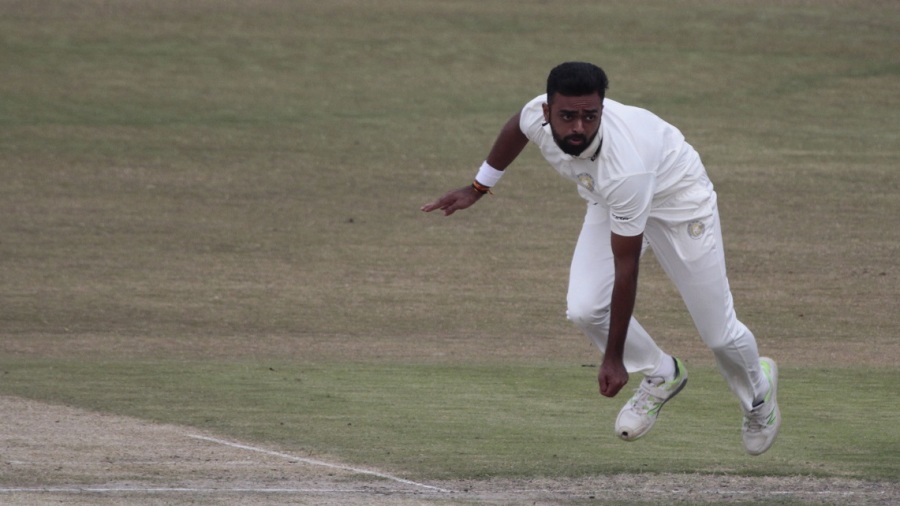 Jaydev Unadkat extended his dream season as he picked up 7 for 56 to help Saurashtra pull off a 92-run win over Gujarat in the semi-final in Rajkot and book a place in the final against Bengal. This will be Saurashtra’s fourth Ranji Trophy final in the last eight seasons, while Bengal are making their first final appearance since 2006-07, and 14th overall.

In a see-sawing contest that went down to the final session on the fifth day, Unadkat took four wickets in 3.2 overs to stamp out Gujarat’s stirring counter-attack. Gujarat went from 221 for 5 to 234 all out – after fighting back from 63 for 5 – as Unadkat ended a 158-run sixth-wicket stand between Parthiv Patel and Chirag Gandhi with the former’s wicket. On the next ball, he took a low return catch to send back Axar Patel and turn the game decisively in Saurashtra’s favour.

Having grabbed 3 for 86 in the first innings, Unadkat finished with ten wickets in the match and took his tally to 65 wickets for the season, the most by a pacer in a Ranji Trophy season, going past Dodda Ganesh‘s 62 in 1998-99. During the match, he also went past Bishan Singh Bedi‘s tally of 64 wickets to be second on the all-time list. Left-arm spinner Ashutosh Aman, who played for Bihar in the Plate Group last season, has the record with 68 wickets.

In the morning session, Unadkat had jolted Gujarat’s hopes of chasing down a challenging 327-run target by sending back Samit Gohel and Dhruv Raval in the first 30 minutes of the day.

Walking in at 18 for 3, Gujarat captain Parthiv decided to counter-attack. He was particularly severe on young Chetan Sakariya, hitting him for a couple of fours to get the scoreboard moving. Along with Bhargav Merai, he added 42 in 46 balls of which Merai’s contribution was just 9. However, the chase was dented further when Prerak Mankad dismissed Merai for 14 and Rujul Bhatt fell to Chirag Jani for 1.

At 63 for 5, it looked like Saurashtra would canter to victory but Parthiv and Chirag Gandhi had other ideas. Just like Parthiv, Gandhi too started aggressively and the two took Gujarat to 105 for 5 at lunch.

If the morning belonged to Saurashtra, the post-lunch session proved to be the only wicketless session of the match. Parthiv and Gandhi kept batting in the same vein and looted 105 runs in 26 overs. There were some eye-catching flicks from Parthiv, while Gandhi kept finding the boundary with his back-foot punches.

Having reached their individual half-centuries just after the lunch break, the two batsmen looked set to bring up their hundreds and script a memorable victory for their side. With the second new ball still 16 overs away, the duo took Unadkat for 13 runs in the first over after tea and took Gujarat within 106 runs of a memorable victory.

But then, like many times in this season, Unadkat changed the complexion of the match with Parthiv’s wicket. Any glimmer of hope that was left for Gujarat ended when Gandhi chopped Unadkat on for 96 as they lost their last five wickets in just 13 runs.