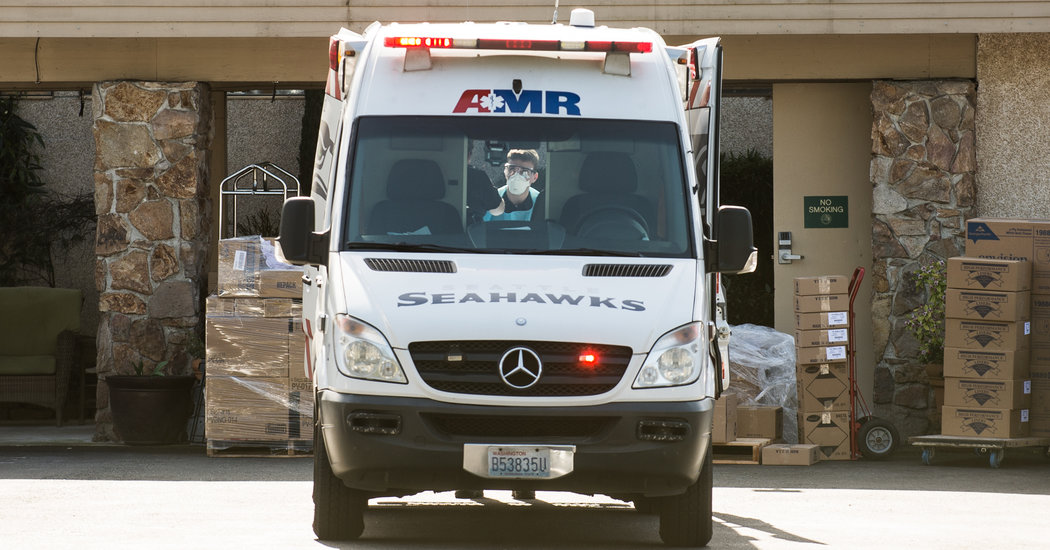 Over the weekend, a nightmarish scenario unfolded in a Seattle suburb, with the announcement that the coronavirus had struck a nursing home. The outbreak, leaving seven dead and eight others ill through Wednesday morning, exposed the great vulnerability of the nation’s nursing homes and assisted living facilities, and the 2.5 million Americans who live in them.

These institutions have been under increasing scrutiny in recent years for a unique role they play in inflaming epidemics. Research shows these homes can be poorly staffed and plagued by lax infection-control practices, and that residents frequently cycle to and from hospitals, bringing germs back and forth.

Now, public health experts fear these facilities could become central to the rise and spread of the novel coronavirus. Statistics from China show that the infection caused by the virus, called Covid-19, kills nearly 15 percent of people over 80 years old who have it and 8 percent of people in their 70s — the very population that makes up more than half the population of these homes.

“We have to prepare for the inevitability that there are going to be facilities like the one in Washington where you’re going to have the virus and have it move rapidly through nursing homes and assisted living facilities,” said Dr. David Dosa, a geriatrician and professor of medicine at Brown University, where he studies disaster preparedness.

Already, 380,000 people die annually from infections at these long-term care facilities, according to the Centers for Disease Control & Prevention, and 1 million people get serious infections in them.

Industry critics — who have become more vocal in recent years — say that many facilities are alarmingly unprepared for coronavirus and that the government’s guidance so far has been short on detail and urgency.

“Every facility should be holding a boot camp to train health care workers,” she said. Otherwise, she added, “hospitals and nursing homes will become the most dangerous places to be.”

The Centers for Medicare and Medicaid Services, the trillion-dollar federal agency that regulates the nation’s 15,700 nursing homes, issued updated guidance on Wednesday for these facilities. Vice President Mike Pence, who is leading the nation’s coronavirus response efforts, said on Tuesday that 8,200 C.M.S-funded inspectors of nursing facilities in the states will focus exclusively for the time being on infection control — a significant shift in how resources are used.

In an interview on Tuesday, the C.M.S. administrator, Seema Verma, said that the agency’s existing rules that govern infection control and prevention should provide a strong defense — if they are followed properly.

“There are very detailed instructions and guidelines around infection control,” Ms. Verma said. “They are already in place. Dealing with infectious disease is not new to the health care system. We’re just calling health care providers to action and to double down on infection control.”

The existing rules largely emulate a series of protocols used to deal with the seasonal flu, “the closest analogy,” said Dr. Lisa Winston, the medical director for infection control and prevention at Zuckerberg General Hospital in San Francisco, an institution that has an on-site skilled nursing facility.

The flu protocol calls for isolation of sick patients, wearing of masks and gowns by staff and limiting visits by people who are sick.

But the analogy fails in key ways, Dr. Winston said — notably in that the flu has a vaccine and a prophylactic anti-viral treatment often given during outbreak; no such medicines exist here.

Large swaths of the population are immune to the flu, whether through vaccine or natural immunity, whereas this coronavirus is a novel germ that humans have not adapted to defend against. Visitors may be walking into nursing homes while incubating the germ.

In tweaking its existing guidance, the federal government is now telling nursing homes to bar visits by people who are sick and have traveled to affected countries and offers procedures for determining when nursing homes and hospitals to transfer Covid-19 patients to one another.

Earlier in the week, the federal Centers for Disease Control and Prevention gave guidance to these long-term facilities to post signs discouraging visitation by people with respiratory illness and give sick leave to employees so they don’t come to work ill.

Since the outbreak at the Life Care Center in Kirkland, Wash., nursing home chains and trade groups, along with mom-and-pop homes and assisted living operations, have been trying to get policies in place with uncertain information. At St. Anne Nursing & Rehabilitation Center, in Seattle, a 47-bed skilled nursing home, signs went up in January discouraging visits from relatives or friends with symptoms of flu or colds, but the concern has gone into overdrive after the nearby Kirkland outbreak, said Marita Smith, the home’s administrator.

“My concern is people who are asymptomatic,” she said.

She said the staff knows the families of the residents and the plan is to be heightened in their scrutiny of visitors to make sure no one is sick. She also said that she plans not to take admissions from the hospitals from “the east side,” which is the location of Kirkland and of Evergreen Hospital, where the sickened nursing home patients were sent.

“I don’t want to be accused of discrimination but we wouldn’t want to admit anyone from Evergreen or Life Care until we know more,” she said.

“What keeps me awake at night,” she continued, are a handful of questions: how long is the incubation period of the virus; will traditional cleaning products work to sanitize against it; can you become ill more than once?

St. Anne Nursing is an independent nursing home, a veritable mom-and-pop shop. On the other end of the ownership spectrum is a huge company like Genesis HealthCare, a Pennsylvania corporation that has 400 assisted living, nursing home and senior living communites around the country. Asked about its planning for Covid-19, the company issued a brief statement saying that its team is meeting regularly to discuss the issue and is coordinating its efforts based on government guidance.

Bridget Parkhill and Carmen Gray, whose mother is a resident of Life Care Center of Kirkland, said they were complaining even before the outbreak about the kinds of conditions that can give rise to infection.

But she said she’s learned in her 10 years working in the field that the situation is not isolated. “They’re all horrible,” she said. “They aren’t following protocol and they need to have twice as much staff as they have.”

Life Care Center of Kirkland is part of a chain of more than 200 nursing facilities called Life Care Centers of America, which is based in Tennessee. The company did not return a call for comment. On its website, the company posted a brief statement saying that the company is working with the C.D.C. and the Washington State Department of Health and the situation is “evolving.”

The Life Care Center of Kirkland has been cited previously for infection control violations by the State of Washington, and the federal government.

The sisters have been left now with an additional concern: their mother, Susan Hailey, 76, has had a cough since early last week and now shortness of breath and diarrhea, but the nurse there has told them by phone (they are no longer allowed to visit) that their mother is not eligible for a Covid-19 test until she shows a fever.

“For God’s sake, why not rule it out,” Ms. Gray said on Monday. “You could put a lot of people at ease. You could put the community at ease.”

The family has been told as of Wednesday morning that the home does plan to test their mother and that test kits are on site to test every resident.

CMS rates the nation’s 15,700 nursing homes and Life Care Center of Kirkland received an above average score for staffing — four stars out of five — and an average score of three stars for health risks based on recent health inspections. Ms. Verma, head of C.M.S., said she hoped by week’s end the agency would have investigators at Life Care in Kirkland.

“Were there lapses there?” she asked. “Was this an issue of them not following policies or was there something else?”

A challenge for the long-term care industry is its diffuse nature. Unlike with big hospital systems, the long-term care business has many small operations under independent ownership. Assisted living centers, in particular, are essentially unregulated.

At the same time, these facilities have been forced to handle more and more complicated medical cases. That is because hospitals, bowing to pressure from the insurance industry and in an effort to keep costs low, have pushed patients into nursing homes that once would have had longer hospital stays. Plus, these companies are dealing with an aging American population: Of the 1.4 million residents in these facilities in 2014, 585,000 were older than 85, and another 371,000 were between 75 and 85, according to statistics compiled by the Kaiser Family Foundation.

The Kirkland outbreak is “a potent wake up call for all of us in health care facilities that deeply care about a vulnerable population,” said Dr. Susan Huang, medical director of epidemiology and infection prevention at the University of California Irvine School of Medicine, who has researched infection spread in skilled nursing homes.