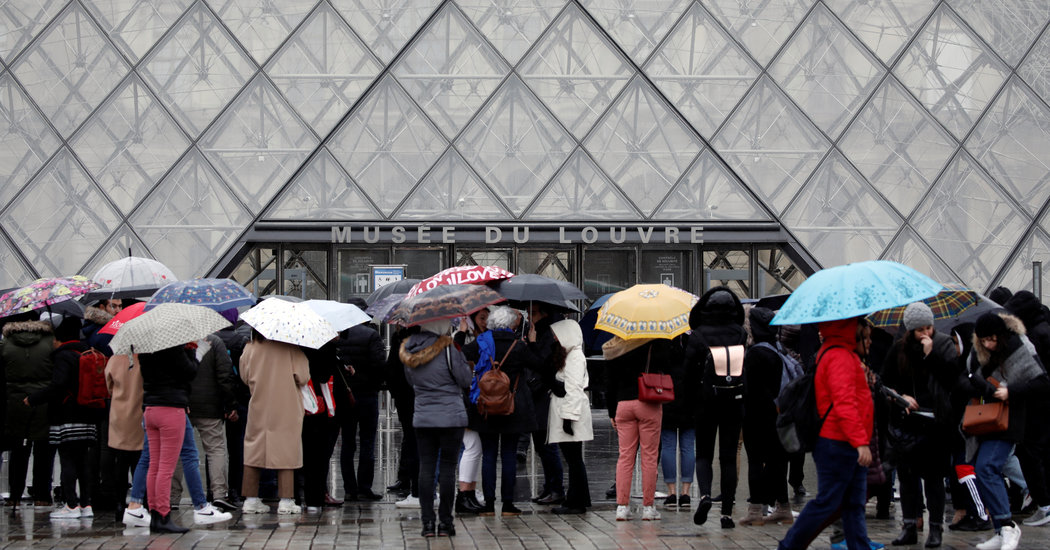 PARIS — The line of around 600 people outside the Louvre on Wednesday was a swirl of rumor, with people wondering if the world’s most-visited museum would open after a three-day closure. Since Sunday, the Louvre’s staff had been refusing to work, fearful they might catch the coronavirus from someone among the museum’s more than 30,000 daily visitors.

“Nobody says anything,” said Satu Fontanili, 34, from Finland, who was in line with her husband and toddler. “Everything looks normal, but the doors remain closed.”

“I don’t think that we’re going to stand still here in the cold for another one or two hours,” she added.

Around midday, the museum’s doors opened without fanfare, and the crowd started shuffling in.

Louvre employees voted on Sunday to stop work over safety fears, a move allowed under French law. The museum stayed closed on Monday, and does not open on Tuesdays. The museum’s management, its doctor and staff representatives met throughout Tuesday to consider measures to protect workers from the virus, and employees voted Wednesday morning to accept them, Andre Sacristin, a Louvre employee and union representative, said in a telephone interview. The unions representing employees asked for visitor numbers to be halved, but that request was rejected, Mr. Sacristin added.

Workers also asked to be provided with face masks and gloves; the museum agreed to a small bottle of hand sanitizer instead, Mr. Sacristin said.

The museum also agreed that ticket purchases would now occur largely via self-service machines. Staff members will operate two ticket kiosks, but would do so from behind a glass barrier to prevent direct contact with visitors. They will not handle cash, only credit cards.

Sophie Grange, deputy head of communication for the Louvre, said Wednesday morning that about 3,500 tickets had been purchased online for that day. Such sales usually represent about 50 percent of total visitors, she said.

Once visitors have bought their tickets, most want to see one thing: the Mona Lisa, which hangs in the Salle des États. Christian Galani, a Louvre employee and union representative, said in a telephone interview that it had been agreed that guards would no longer have to move among the crowds in the room to stop people from dawdling in front of the Mona Lisa and to break up large groups that could cause bottlenecks.

Around 12:30 p.m. Wednesday, the Salle des États had only a few dozen visitors, cellphones aloft, taking selfies with the Mona Lisa. Usually, hundreds of people wait in line to catch a glimpse of the masterpiece, but uncertainty about whether the museum would open on Wednesday kept many away.

One guard, Quentin Osle-Rudler, stood six feet from the painting, keeping watch. He said he was unsure about the new directive not to move around the room. “People are going to wait around in front of the painting,” he added. “It will be messy.”

He said he was concerned that the Salle des États would become too full as the crowds returned to the museum, increasing the risk of transmission for the virus.

Mr. Galani, the union representative, said further measures would be needed. “The problem is that once the room is full of people, I don’t see how agents could not be exposed to the virus,” he said. “At some point we will probably have to regulate the number of visitors in the room.”

Over recent days, the Louvre has been turned into a test case for how large museums should respond to the coronavirus outbreak. France has over 200 confirmed cases, with several deaths.

On Saturday, the French government banned all indoor events of more than 5,000 people, including arena concerts. The popular rapper and singer Maître Gims was one of several artists who postponed a planned tour. The French culture minister, Franck Riester, said the ban did not apply to the Louvre because visitors were dispersed throughout many rooms of the museum. But the Louvre’s employees were not convinced, and voted to close on Sunday.

“Our agents are aware of the potential danger,” Mr. Sacristin said. “They think they don’t have enough training and protection, and that their health could be endangered.”

Other cultural sites in Europe have taken measures to protect workers and visitors from the virus. Museums in northern Italy reopened on Tuesday after a government ordered closure, but with a requirement that visitors keep at least one meter, about three feet, apart at all times. Other Italian museums remain closed.

Mr. Osle-Rudler, the guard at the Louvre, said he did not think that the Louvre measures went far enough, and that employees could vote to stop working again if they felt unsafe.

“We’re not happy to close the museum,” Mr. Osle-Rudler said. “But this is for our security and for the security of the visitors.”