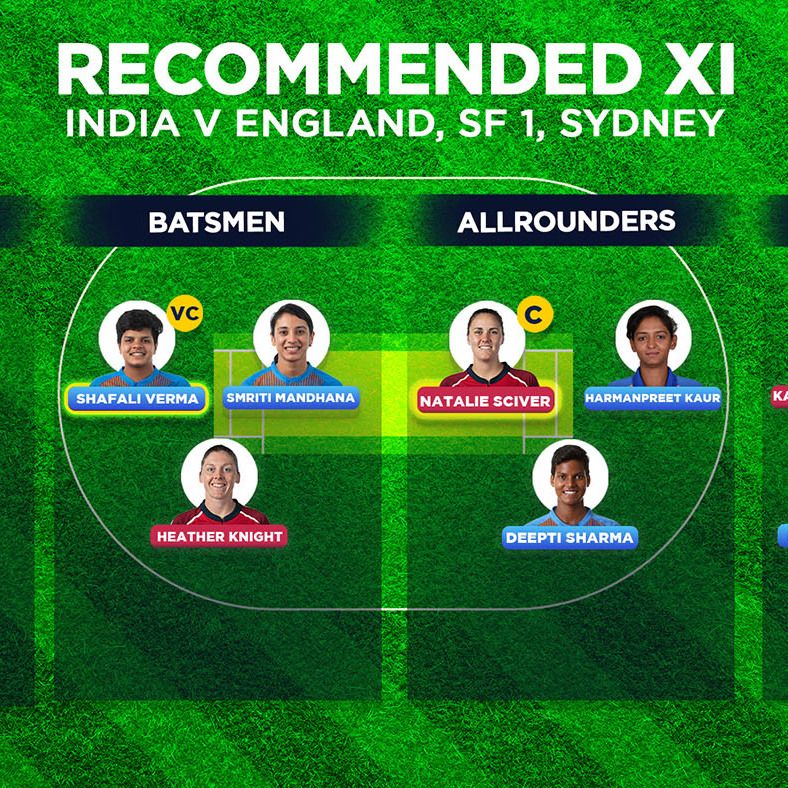 Note: We might not be able to tip you off about late injury (or other relevant) updates

The highest run-scorer so far in the Women’s T20 World Cup 2020. Sciver has been a rock for England in the tournament. She has scored three fifties in the four games so far, and also has a couple of wickets to her name.

The dasher from Haryana has had a dream start to her Women’s T20I career. And an even better T20 World Cup in fact, which has bumped her up to No. 1 on the women’s T20I batting rankings. She has scored 161 runs at a staggering strike rate of 161, the highest among all batters who have scored over 5 runs in the tournament. We think she will go about her business as usual at the SCG.

Heather Knight: The second highest run-getter in the tournament so far. Knight will be raring to go and put up another good show. She has been in good form, scoring 193 runs – including a century against Thailand – at 64.33 and a strike rate of 136.87. Her bowling could also come in handy in a big match.

Smriti Mandhana: Mandhana has been getting starts but hasn’t quite made it big in the tournament yet. Has she saved her best for the big games? You just cannot leave such a dynamic player out of your XI. The last time she played England in a T20 World cup semi-final, she was the top scorer for India with a 23-ball 34.

Sophie Ecclestone: Nobody has bowled as economically as left-arm spinner Ecclestone – the new No. 1 in the women’s T20I bowling rankings – in the tournament. She is also the joint-second-highest wicket-taker in the tournament. To top that up, she has now taken a wicket or more in her last 18 T20Is. So she has to make it to your team.

Harmanpreet Kaur: Another experienced player in the Indian team who has not been in the best of form. It looked as if she might have regained her touch against Sri Lanka but she got out for 15 in that game as well. But her highest T20I score this year – 42 not out – came against England just over a month ago. This could be the game in which her fortunes can change.

Deepti Sharma: Sharma has been a quiet contributor in all games for India. She has contributed with either bat or ball on all four occasions. With 83 runs in four innings and two wickets and an economy rate of 5.75 in the tournament, she is one of our value picks.

No English bowler has picked up as many wickets against India as Brunt has done since 2018 in women’s T20Is. She has picked up nine wickets in just four games in this period. Though she has not done much of note in the tournament so far, her experience and record against India make her a value pick.