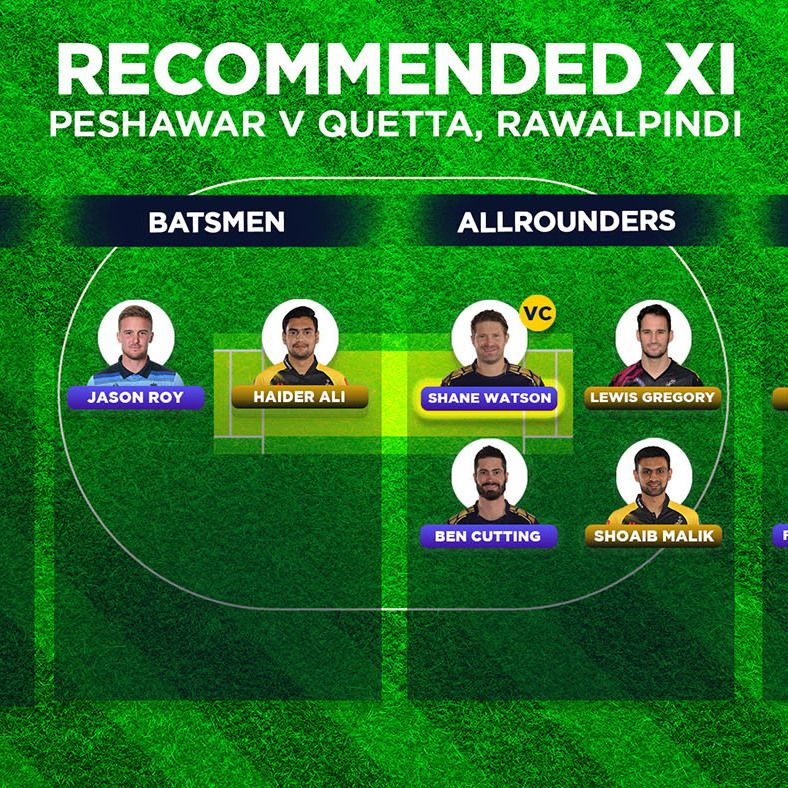 Not often has Kamran Akmal gone without a significant score in over three PSL games. He scored a century the last time these two teams met, and he has to be your captain. He has scored 265 runs in the last five innings against Quetta.

Watson has been trying to spend more time in the middle and it has helped. He scored a fighting 80 off 41 balls against Multan Sultans and we are sure something similar will happen against Peshawar. He has scored at a strike rate of 129.03 against spin and 158.44 against pace in PSL 2020 so far.

Jason Roy: Roy is too powerful a striker to leave out. He has struck at a more-than-healthy strike rate of 136.49 in the powerplay in PSL 2020 so far. Roy strikes at 144.96 against left-arm pacers in T20s, and with Wahab Riax and Rahat Ali in the Peshawar team, Roy could score some big runs.

Shoaib Malik: Shoaib must be high on confidence after his 68 in the previous game at the same venue. He is a confidence player and someone who makes the most of good form. You must not leave him out. Malik has scored 974 runs at No. 4 in all T20s since 2019 at a strike rate of 126.98, the most runs by any batsman in that position in the time frame.

Lewis Gregory: Gregory has played just two games in the tournament so far but has impressed already. He won the Player of the Match award for his 4 for 25 in the first game and scored a useful 25 lower down the order in the second game. He is one of our value picks.

Fawad Ahmed: Fawad got into the team after being left out for the last few games and got among the wickets immediately. Always pick legspinners in your T20 sides, and Fawad is a good one. He has picked up 82 wickets in all T20s since 2018 at an economy of 6.75.