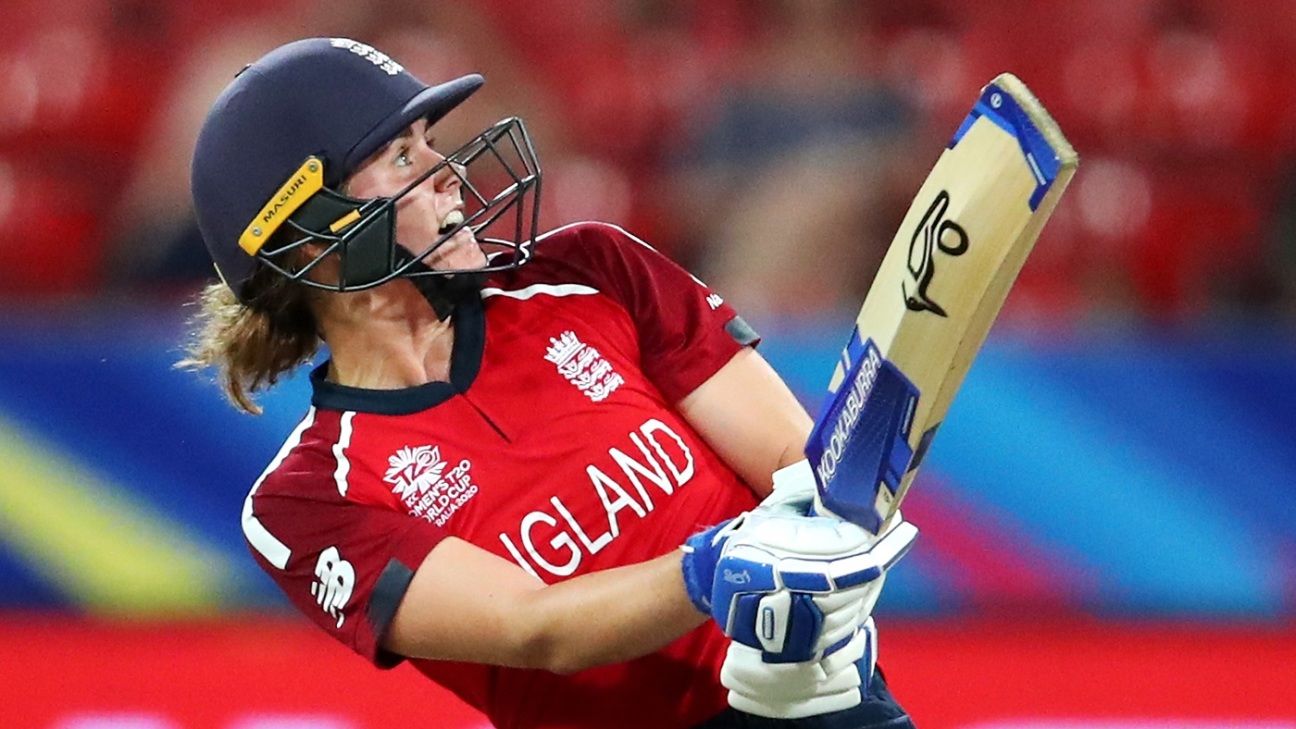 There’s never a bad time to hit career-best form, but finding it at a World Cup is especially handy. England allrounder Nat Sciver is playing as well as she ever has in the T20 format, having ended the group stage in Australia as the leading run-scorer in her new role at No. 3.

Half of Sciver’s eight T20I fifties have come in her last six innings: one in the tri-series which preceded the World Cup and now three in four knocks in the tournament itself, against South Africa, Thailand and West Indies, the latter in the match that secured a semi-final berth for her team.

Sciver picked out one of the key reasons behind her form as the volume of cricket she has played in the last few months – the WBBL for the Perth Scorchers (where she was coached by Lisa Keightley shortly before she took the England job) followed by a series against Pakistan in Kuala Lumpur before arriving in Australia.

“I think previously when she’s gone in during the powerplay, she’s felt like she’s had to go mad and gone a bit too high risk. In this World Cup, she’s been accepting that she might have a few more dots in the powerplay but can catch up”

“Consistency of playing, it’s a bit like running in with the ball, you get a little bit of rhythm,” she told ESPNcricinfo. “I was lucky enough to play in the Big Bash which probably helped a little bit and through the winter we didn’t really stop. So been feeling pretty good and nice to get the results.”

Before the series in Malaysia against Pakistan, Sciver had only batted at No. 3 five times in 66 T20Is. She briefly returned to No. 4 in the tri-series, in a match where she scored 50 against India, when Katherine Brunt was promoted to No. 3, a tactic they have sensibly shelved during the World Cup. The best players need to face the most balls in T20s and for England, Sciver is certainly one of those.

Being self-critical, she believes there have been innings where she hasn’t got it quite right at the start but by not giving her wicket away has been able to catch up in the latter stages, something she admitted she can forget is in her armory.

“I probably would have liked to get going a bit quicker in some of the innings but feel like I’m adapting and reading the game pretty well to play to the tempo the game needs,” she said. “I’ve been a bit guilty of not remembering that previously. It could be different on Thursday but at the moment it’s coming out of the middle nicely so need to look after that.”

Her captain Heather Knight praised how Sciver has adapted to her new position by realising that she has the ability to hit through as well as over the field.

“That’s been a key learning for her, I think previously when she’s gone in during the powerplay, she’s felt like she’s had to go mad and gone a bit too high risk,” Knight said. “In this World Cup, she’s been accepting that she might have a few more dots in the powerplay but can catch up. She’s a phenomenal striker of the ball and has been very calm, trusts her game, and think she has enjoyed having a few balls to face.”

One of the innings where Sciver showed her ability to catch up the scoring rate was against South Africa where she went from 24 of 29 to 50 off 41 but it wasn’t enough as England lost in the final over. It gave their campaign an early jolt and, like the hosts, meant they could not afford another slip. Sciver admitted there were a few waves of doubt personally, but the team believed they were not far away from the level they needed to be at.

“I think everyone was a bit deflated. As an individual, you probably have a bit of doubt,” she said. “Can we really do this? But in terms of everyone believing, in the team we weren’t far away. We knew if we’d done just a few things differently we would have got over the line. Even with not as many runs as we’d have liked we managed to take it to the last over. The language we used was no different to what we are using now, it was just a case of getting it done in the middle.”

England’s reward for their three straight victories is a semi-final against India, who went unbeaten through their group. The defeat to South Africa could yet prove critical, though, with a poor forecast looming and a washout meaning group winners progress. “Not having a reserve day isn’t ideal, but so be it,” Sciver said.

There is the prospect of a healthy crowd at the SCG and then the promise of something far greater if they can reach the final at the MCG with 60,000 tickets sold as of Wednesday. Sciver recalled the 2017 World Cup final Lord’s, when England beat India in front of a sellout crowd, a match where she made a crucial half-century.

“I loved it,” she said. “You still get some jitters going out to bat or waiting to bat, but once I’m out there being in that noise lifted me a little bit so I’m looking forward to that energy if we are there.”

England have a 5-0 record against India in T20 World Cups. Sciver could have a big role to play in making it 6-0.